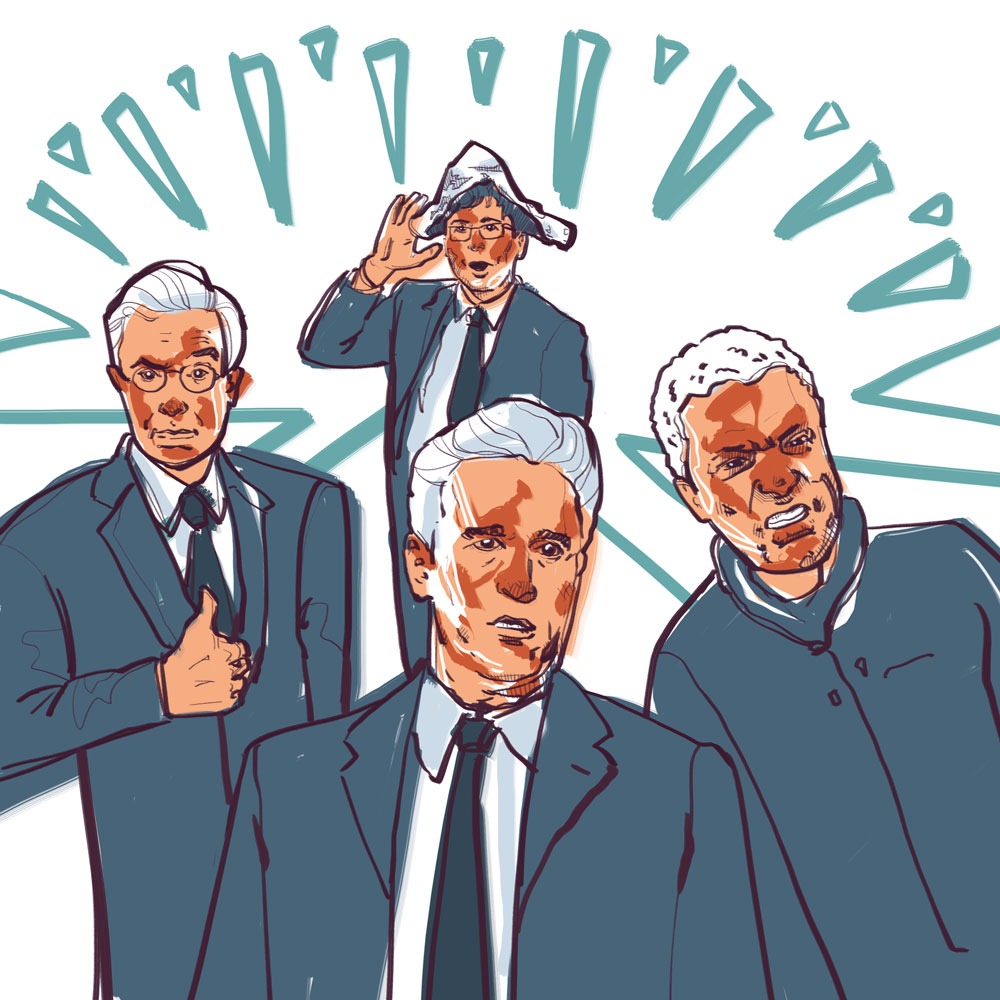 On Tuesday, Feb. 10, during the last minutes of The Daily Show, Jon Stewart announced that he would be resigning from his position as the show’s host sometime in 2015.

In his brief speech to the audience, Stewart thanked Comedy Central for the opportunity to host the show, adding, “In my heart I know, it is time for someone else to have that opportunity.”

I can’t say that I’ve watched it consistently since Stewart started. But I have watched every episode of The Daily Show for at least 10 years. Along with every episode of the spin-off The Colbert Report before it went off the air in late 2014, John Oliver’s new series Last Week Tonight with John Oliver, and the early seasons of This Hour Has 22 Minutes and the Rick Mercer Report – Canada’s closest parallels. Stewart’s brand of fake news has been a constant through all of my adult life, and much of my adolescence.

In that time I’ve witnessed the impact of Stewart’s serious comedy.

Stewart took over as host of The Daily Show in early 1999, bringing his own brand of self-deprecating humour. He quickly established his personal voice by honing in on political issues. He criticized political elites for failing to represent people’s interest through both corruption and general ineptitude, and the news media for its frequent failures to hold them to account.

Jon Stewart has played a major role in the media landscape over the last several years. Although he’s suggested laughs are always his first priority, on a number of occasions his influence has stretched beyond the world of late-night television.

Zadroga bill
In 2010, Stewart dedicated an entire show to lambasting Senate Republicans for filibustering the Zadroga bill. The bill promised to provide medical coverage to first responders who were on the scene after the September 11 attacks, and would have been paid for by closing tax loopholes. It had already been passed by the house, and only needed the approval of the Senate to be passed into law. Even though the Democrats had a majority in the Senate and had enough support to pass the bill the Republican caucus was able to prevent it passing by stalling debate.

“This is an outrageous abdication of our responsibility to those who were most heroic on 9/11,” said a visibly irate Stewart in his monologue.

Stewart interviewed a panel of four of the first responders who had each developed medical conditions, in the last segment of the episode. It was impossible to directly connect their illnesses to their work after the attacks and without coverage provided by the Zadroga bill they were not covered for their medical bills.

The episode put a face to those suffering as a result of the Republican’s politicking and people responded. The news media began to cover the bill and it ended up being put into law days later.

John Feal, founder of the FeelGood Foundation, said that although the applied pressure was a team effort it was largely due to Stewart’s contribution that it was a success.

“What Jon Stewart did was he literally shamed conventional media and the U.S. government into doing the right thing,” said Feal.

Shaming conventional media was ultimately the way in which Stewart had the most impact on his show.

Jim Cramer interview
In that same vein, Stewart famously took Jim Cramer, host of CNBC’s Mad Money, to task in an interview on The Daily Show, after a back-and-forth between the two through the media.

Stewart criticized Cramer personally for his overconfident predictions and flippant attitude to investment advice leading up to the 2008 financial crisis. But his harshest criticisms were reserved for CNBC, which he suggested perpetuated a systemic failure to provide meaningful coverage of the misdeeds on Wall Street that caused the financial crash.

Stewart had spent much of the past week criticizing CNBC for its lack of critical financial reporting, and the way they laid blame after the financial crisis. Rick Santelli, a CNBC commenter, who had originally been scheduled to appear on the show, had criticized mortgages holders for their role in the 2008 financial crisis, calling them “losers.”

Days before the Cramer interview, Stewart used his half-hour comedy slot to point out the hypocrisy of commentators, who themselves had not predicted the financial collapse, blaming their viewers for not seeing it coming. Particularly in light of the network’s milquetoast, entertainment-style, coverage.

“The financial news industry is not just guilty of a sin of omission, but a sin of commission,” Stewart said in his interview with Cramer.

“CNBC sells itself as financial experts [ . . . ] And they have the access to the CEOs. And yet they didn’t catch any of this. And yet here they are blaming people who don’t have the financial expertise and saying they’re part of the problem.”

Cramer tried to defend his work at CNBC, to no avail.

“I understand that you want to make finance entertaining,” said Stewart in the final minutes of the episode. “But it’s not a fucking game.”

It was probably the closest our generation will ever get to a Frost/Nixon moment.

Crossfire cancellation
Stewart also famously played a role in the demise of the long-running CNN debate show Crossfire, which originally ran from 1982 to 2005.

The show, which was co-hosted by left and right archetype pundits Paul Begala and Tucker Carlson, had people from opposite ends of the political spectrum—political spectrum being as narrowly defined as you would expect from a 24-hour news channel—“debate” in front of a live studio audience.

Stewart made an appearance in October 2004 to promote The Daily Show with Jon Stewart Presents America (The Book): A Citizen’s Guide to Democracy Inaction, a book he co-wrote with members of his staff. Being a vocal critic of the coverage, and the very nature, of the 24-hour news channels, Stewart didn’t hold back in his appearance.

He started with a message to the show’s hosts.

“I made a special effort to come on this show today because I have privately, amongst my friends and also in occasional newspapers and television shows, mentioned this show as being bad. And I felt that that wasn’t fair and I should come here and tell you that it’s not so much that it’s bad as its hurting America. So I wanted to come here today and say [ . . . ] stop. Stop hurting America. And come work for us.”

Stewart was both unrelenting and hilarious through his 10-minute interview. He pulled the show apart, calling out the show’s hosts for its theatrical format, which he argued, distracted from real debate. The studio audience was, more often than not, clearly in Stewart’s corner, as both of the show’s hosts tried to argue the merit of the show’s existence.

On Jan. 6, less than three months later, CNN announced that the show was being cancelled.

At the time, CNN president Jonathon Klein, suggested that Stewart’s criticisms may have played a role in the decision.

He also suggested that Crossfire, or rather the essence of Crossfire, may play a role on other CNN programs “in small doses.” It may have turned out to be more than small doses as the show was revived for a second run from 2013-2014, and Stewart has spent the better part of the past 10 years mocking CNN on a regular basis for their continued, over the top theatrical approach to news, describing the network as “terrible,” and during an interview on Larry King Live, calling its host, who had announced plans to retire, “the last man out of a burning building.”

Stewart’s impact
Since taking over at The Daily Show, Stewart has become a dominant voice in late-night television. No one else has been as widely regarded.

He’s been on duty through the wars in Iraq and Afghanistan, Hurricane Katrina, and the September 11 attacks. He provided criticisms of the Obama administration for its use of drone strikes, the department of veteran affairs’ failure in delivering benefits to veterans, and the Republicans’ ongoing denial of climate change – all from a half-hour evening slot on a basic cable comedy network.

Even though, more often than not, he’s found his comedic muses in the political realm, Stewart has always rebuffed commentators’ attempts to label him as a newscaster or political figure, claiming comedy will always be his real work.

In an interview with Fox News’s Chris Wallace, Wallace implied Stewart was an aspiring political player and a left-wing ideologue. Stewart responded by asking Wallace “What am I at my highest aspiration? Who am I? Am I Edward R. Murrow or am I Mark Twain?”

“The embarrassment is that I’m given credibility in this world because of the disappointment that the public has in what the news media does,” said Stewart. When people identify Stewart as a newscaster they miss the longer occupational tradition of jester, which Stewart consciously throws in with. Comedians like Stewart, Stephen Colbert, John Oliver, and Rick Mercer, are able to bring light to serious injustices by highlighting the absurdity of our reality.

At its best, comedy can make ideas accessible. It can get past mental blocks and present information in a context that leaves people more open to new considerations. I’ve taken courses in advanced sociological theory in which I was able to relate most of the core ideas theorists and philosophers put forward back to George Carlin routines.

Stewart has done something special in bringing that medium to a nightly format – drawing on current events every night to keep his show topical and informative. But under all of that he’s still playing the role of the court jester.

Moving forward
Stewart leaving The Daily Show will leave a hole in comedic news. Fortunately his time as host of the show has had a significant impact. An entire generation of comedians have come up under and around him who can carry that banner. People who have watched a master walk the line between a cathartic comedy and informative news and make it through unscathed – relatively so, anyways.

I am a great fan of what he’s done. I’ll miss his New York character; I’ll miss his impersonations of Lindsey Graham and Donald Trump; but more than that I’ll miss his tenacity and ability to take a seemingly never-ending parade of bad news and turn it into something hysterical. It’s been a pleasure to watch.

To the bat lab!