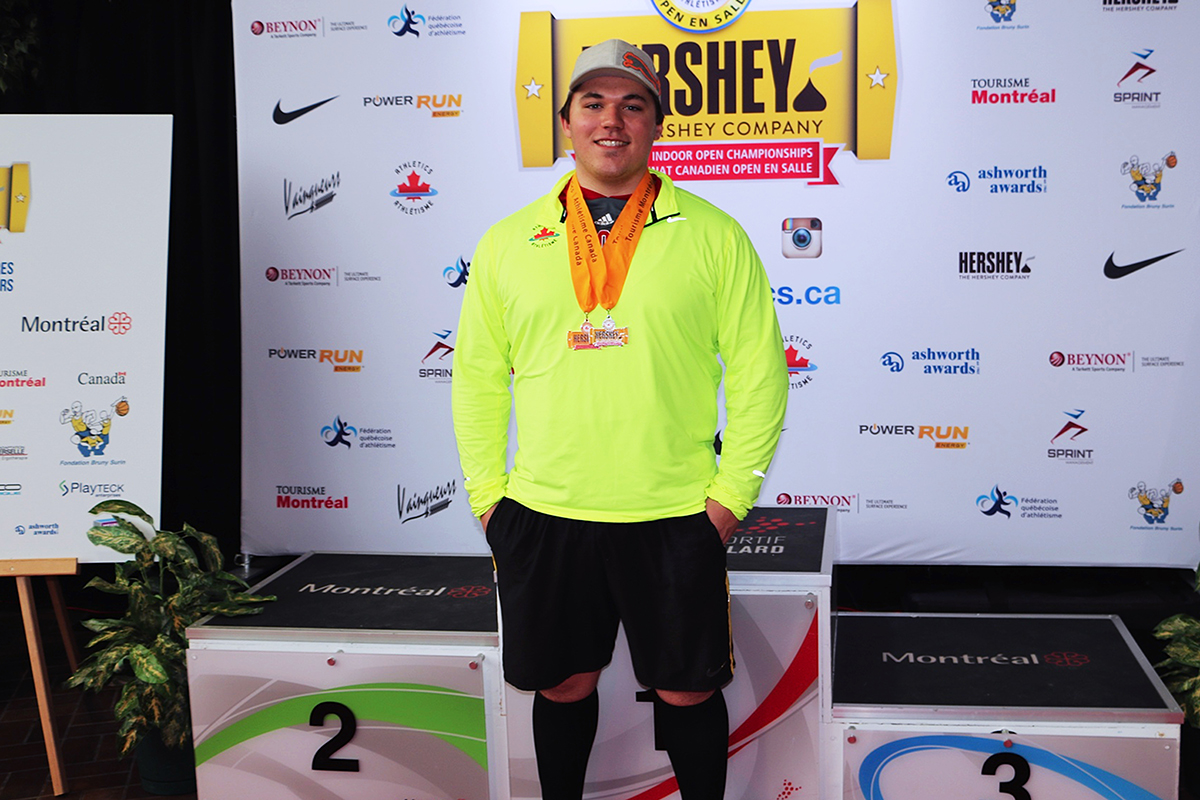 It’s been a long journey for University of Manitoba Bison thrower Justin Krantz. Originally hailing from the small town of Roblin, Manitoba, the multi-sport athlete at Goose Lake High School began as a thrower eight years ago, and started taking track and field seriously in Grade 10. Since then, he has put in an excessive amount of work and mileage to get where he is today.

“I’ve been throwing competitively for the last four years, mainly by myself as it was tough to have professional coaching living in rural Manitoba,” Krantz said.

A breakthrough moment in Krantz’s career occurred when he met Bruce Pirnie, the current throwing coach for the Bisons, who was also a member of the 1972 and 1976 Canadian Olympic teams in shot put.

Pirnie first approached Krantz when he was in 10th grade, asking to train him after he had placed second in junior varsity shot put at high school provincials. Up to that point, Krantz had been training every day on his own.

“I would travel to Winnipeg to train with coach Pirnie as much as I could, but obviously it was very expensive considering I lived five hours away from Winnipeg,” Krantz said.

Despite the issue of distance, Krantz stayed committed and continued to hone his craft, both on his own and with Pirnie, who had a large impact on his growth.

“I look up to all his accomplishments and how he has affected the athletics community Canada-wide. I aspire to be as great as him one day,” Krantz said.

This past winter, Krantz officially committed to the Bisons after a stellar 2014 campaign, which included setting the provincial shot put record, as well as being named Manitoba’s top male discus thrower by Athletics Manitoba.

Those recognitions helped him not only get recruited, but also gave him the distinction of being named a co-winner of the Manitoba Aboriginal Sport Male Athlete of the Year for 2014.

“I was extremely surprised when I first found out that I won the award, as I didn’t know I was even nominated,” Krantz said.

“It was a great accomplishment for myself. I felt honoured and very proud that I could represent my hometown and my culture.”

Along with his achievements in sport, Krantz—who is of Métis heritage—has also embraced his indigenous roots, giving back to the community when possible.

He is currently on the northwest Métis youth recreation and wellness committee, and has been a long-time volunteer with the Roblin Métis band.

Along with his coach, Krantz was also thankful for his family’s support in getting to this point.

“My parents and brother sacrificed endless amounts of time and effort into helping me compete, and for that I’m forever grateful,” Krantz said.

The future looks very bright for Krantz, and if he keeps up at this pace, expect to see more awards coming his way.