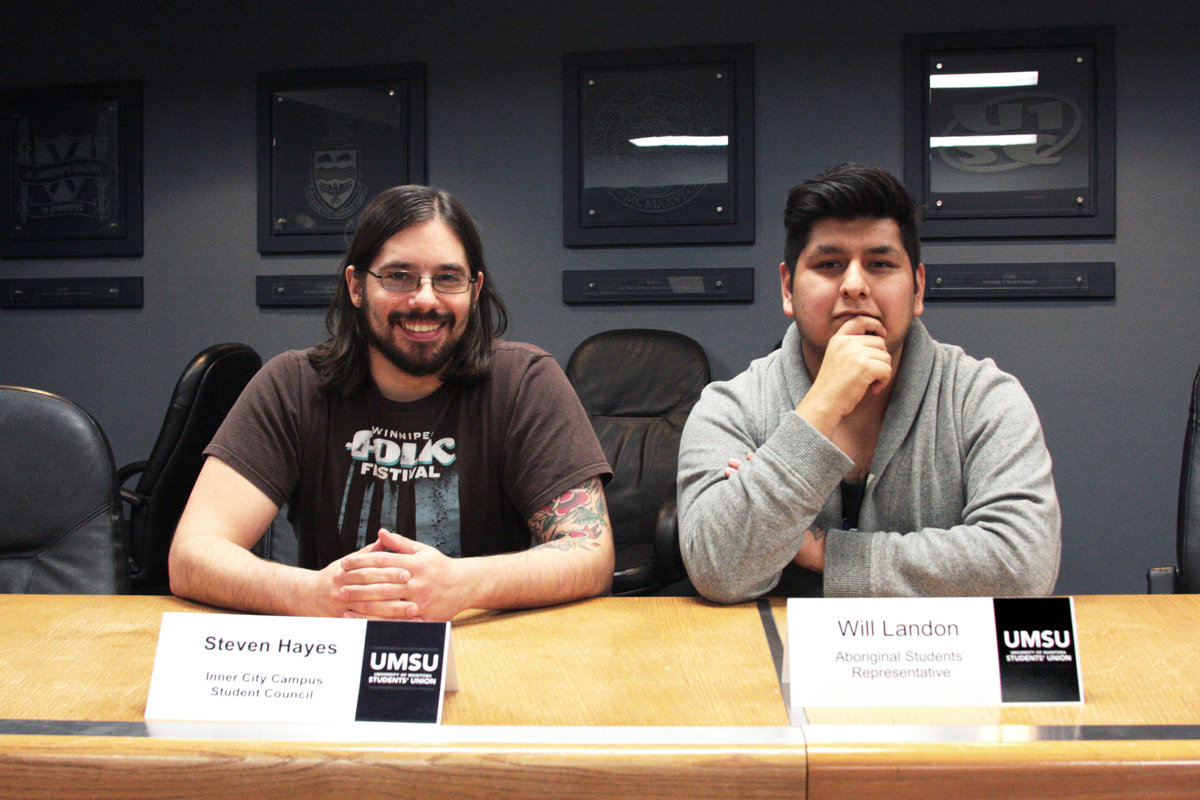 Steven Hayes and Will Landon speak out against racism. Photo by Craig Adolphe

Two UMSU councillors are speaking out against racism towards Aboriginal people in Winnipeg after a recent cover story in Maclean’s magazine labelled Winnipeg the most racist city in Canada.

Steven Hayes, inner-city campus students’ council delegate, and Will Landon, UMSU Aboriginal Students’ Representative, spoke to council about the issues raised in the magazine on Jan. 26 and about how they hoped to work with students to address them.

The Jan. 22 issue of Maclean’s has caused a major stir in Winnipeg. On the day of its release, Mayor Brian Bowman, surrounded by a wide range of local community leaders, responded to the claim that Canada’s “race problem” is “ugliest in Winnipeg.”

Bowman, who is Métis and Winnipeg’s first aboriginal mayor, told media in attendance that “Winnipeg has a responsibility, right now, to turn this ship around and change the way we all relate.”

“We have to shine a light on it,” Bowman said, referring to Winnipeg’s racial divide. “Without the light, we can’t see what we’re fighting. We’re not going to end racism tomorrow, but we’re sure as hell going to try.”

University of Manitoba president David Barnard attended Bowman’s press conference as a community leader and made a statement to the press.

Since the press conference, Mayor Bowman has launched a website: 1winnipeg.ca, which is meant to be a place for people to leave comments, ideas, and discuss racism in Winnipeg.

On Jan. 27, Bowman first announced the site was in development. To date, 89 submissions have been posted on the site, including posts by Bowman; Grand Chief Derek Nepinak of the Assembly of First Nations; former national chief of the Assembly of First Nations, Ovide Mercredi; Winnipeg police Chief Devon Clunis; and local radio personality, Charles Adler.

Hayes speaks for inner-city campus
At the Jan. 26 UMSU Council meeting, Hayes and Landon both used their council reports to address the Maclean’s article and issues surrounding it.

Hayes spoke about the significance of the topic for students at the U of M’s inner city William Norrie Centre at 485 Selkirk Avenue, in the north end of the city.

“The inner city student council believes that regardless of whether or not we are the most racist, that the racism that exists here is a serious issue that must be addressed,” said Hayes. “It is not only shameful, it is in fact oppressive: discouraging aboriginal people from participating as equals in political, economic, and social discourse.

“It disenfranchises youth, discouraging them not only [from] pursuing their dreams, but from dreaming at all; marginalizing individuals, leading to the continued exploitation of entire peoples. Entire peoples. We’re not going to stand by while that happens.”

Hayes said the inner-city social work students were working to establish an honest dialogue on how to address racism in the city, and called on UMSU and the student associations on campus to provide them with support.

“Bring us your ideas. Join in the discussion. It is in the coming together of our various perspectives that we will form a vision. It is in our collective action that our vision will become a reality. This will not happen overnight. It will be an ongoing process; it will take effort and determination.”

Landon highlights positive actions
Landon expressed a desire to address the racism that was highlighted in the article. He shared his experiences of racism growing up on a reserve in rural Ontario, which included multiple instances of violent assault and having teachers tell him he would not make it to university because of his race.

“Is Winnipeg the most racist city, I’m not too sure about that,” Landon said.

“In my personal experience, I don’t think so. But that doesn’t mean that we shouldn’t address it, because now all of Canada is looking at us. Yes, there’s racism in other cities, but they called us out specifically, a national magazine. So what we have to do is start working together to address it.

“We can’t blame each other. We can’t point fingers anymore,” said Landon.

He called on the university and students to lead the way in addressing racism in Winnipeg.

Landon also pointed to a discussion event with guests from Canadians For A New Partnership, organized by the University of Manitoba Aboriginal Students’ Association, as an example of a positive step forward for relations between aboriginal and non-aboriginal people in the city.

The event, which took place on Jan. 22, the same day as the release of the new Maclean’s issue, featured guest speakers Stephen Kakfwi, Phil Fontaine, former prime minister Joe Clark, and Mercredi as representatives of Canadians For A New Partnership. U of M president David Barnard also spoke at the event.

The group’s website identifies their vision as “building a new partnership between First Peoples and all Canadians so that together we can build the strong economy and values-based society that will benefit this and future generations.”

Turnbull weighs in
Al Turnbull, UMSU president, said that he thought the speeches were powerful and was glad the councillors had a chance to discuss the issue. He added that he would like to help the councillors work on the issue moving forward, suggesting that UMSU may play a role in a campaign to address racist attitudes towards aboriginal people.

“Obviously the Maclean’s article was very powerful,” Turnbull said. “I think it, for the most part, was something that everyone recognized is a problem. You get a couple people [ . . . ] going off and defending Winnipeg and condemning the article. That’s bullshit.

Turnbull said that he was disappointed that representatives of local student unions—UMSU and the UWSA specifically—weren’t invited to stand in solidarity when Bowman and several other community leaders responded to the Maclean’s article for the first time.

“There’s no representation for the students. There was Barnard and there was the president of the University of Winnipeg but I thought that we would’ve liked to have been supporting, both physically—physically behind Mayor Bowman—and of course metaphorically to build a stronger Winnipeg and a racist-free Winnipeg.”