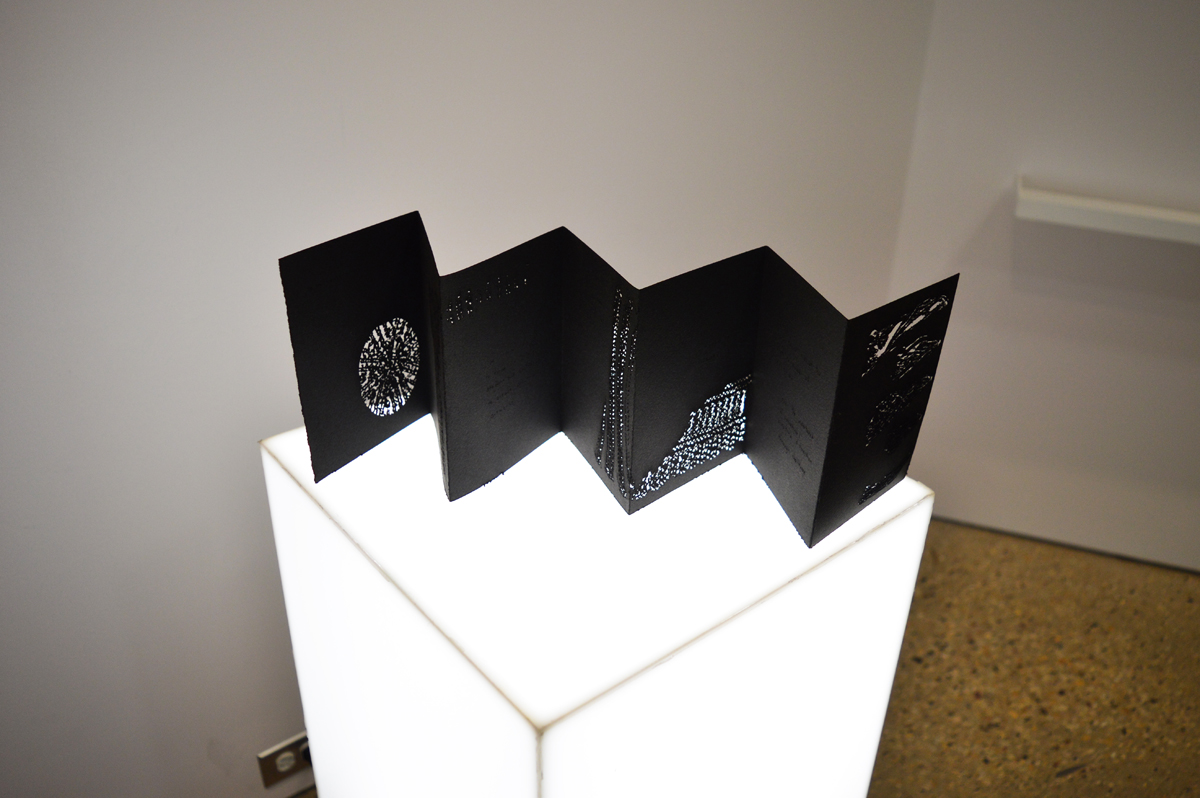 Objects of Knowing is currently on display at the University of Manitoba’s ARTlab, featuring pieces that incorporate text and the personal narratives of the artists. Corrie Peters and Michell Wilson, along with four other University of Manitoba master’s students in the fine arts program, have brought together their interpretation of identity and its transient nature.

Particularly striking is the theme of colonization on the glass display case along one of the walls. Artist Phoenix Thomas has eschewed its traditional use, and chosen to add text with marker to talk about his experiences as an artist who is half-Aboriginal and half-Caucasian.

Wilson, on the other hand, found and reclaimed an old encyclopedia to express her relationship to animals, an overarching theme in her work.

“The idea was kind of to respond to some texts that we had read [in class], and to create a ‘book’ that referenced our identity in some way,” said Wilson.

“My thesis is very much about defining self in relation to animals,” Wilson said. “How our ethics are formed, and the negotiations we go through with ourselves about what is acceptable and what is not acceptable to do to non-humans.”

Peters’ piece, “Knitting Lessons,” is a card with laser-cut knit designs that speaks of her experience at a community-knitting group, and preserving the experiences and unexpected lessons she gained by being a part of the group.

“I’ve been doing it for over a year now,” Peters said. “When you’re in these groups and organizations, it’s always this idea that you’re there to help people, but rather, it’s been more this place of learning for me.”

The text on “Knitting Lessons” talks about the importance of challenging oneself and the calming effect of repetition. Peters encourages guests to pick up the card and take a closer look; Wilson also suggests flipping through her encyclopedia, adding a textural element to the exhibit.

The intimate space of the exhibit does not to feel overrun by the pieces of six artists. Peters and Wilson agree that, after creating their individual pieces, collaborating on the exhibit was an interesting part process.

“We got to speak to each other about our ideas and progress them by talking them through,” Wilson said.

“The works all are stronger for the relationship they have with each other,” Peters added. “Because there’s so much text, it becomes a space where you need to spend a fair bit of time [ . . . ] it ended up speaking well together.”

Peters, originally from Montreal, and Wilson, hailing from Ottawa, both feel they have gained a lot in choosing the university’s art program to develop the focus of their work.

“I came in having a very secure idea of what I would accomplish, and it’s changed in ways that I’ve never anticipated, and in such a great way,” said Wilson. “I had a strict idea [ . . . ] of myself as being a photo-based artist, and that’s opened up, which is fantastic.”

Peters added that the program has been supportive of her relatively niche area of interest.

“I do work around the area of social practice,” said Peters. “Even though there are no faculty members that are super well-versed in that, they’ve given me a lot of freedom to explore and develop.”

Objects of Knowing will be on display at the U of M’s ARTlab until Feb. 15 and features artwork from Michell Wilson, Phoenix Thomas, Corrie Peters, Gwendolyn Freeman, Remo Mamaril, and Shaun de Rooy.