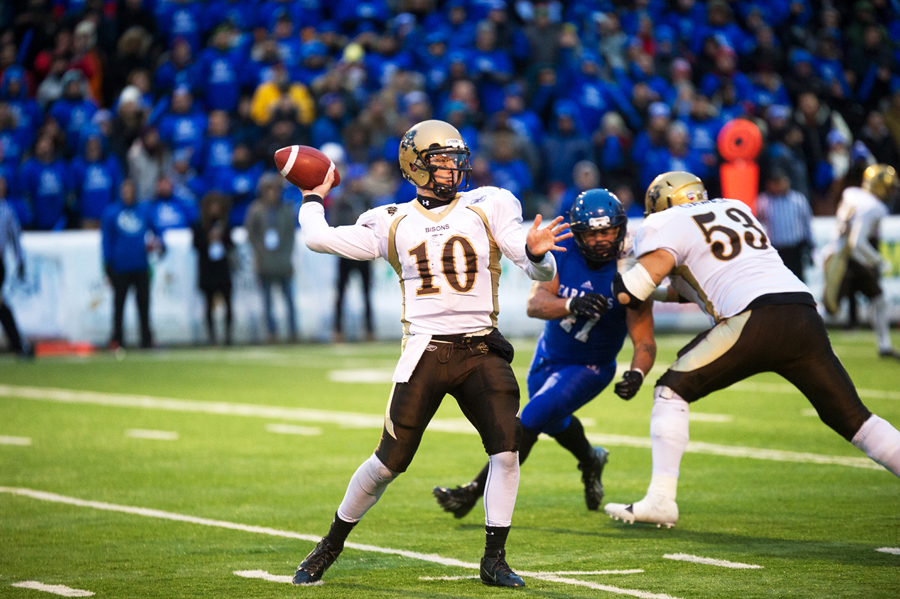 Photo by University of Montreal

It seems like just yesterday that Jordan Yantz took his first snap as starting quarterback of the University of Manitoba Bison football team. In reality, it was over two years ago, and the Regina native has accomplished many feats within that timespan for Manitoba. From helping lead the team to their first playoff win since 2007, to capturing the Hardy Cup this season, Yantz has left his mark on the program.

Now that his time with the Bisons has come to an end, Yantz is looking toward the future, and the Manitoban had a chance to get his thoughts on the 2014-15 season, along with his plans going forward.

The Manitoban: How would you describe the 2014-15 season as a whole?

Jordan Yantz: We had an unreal season. Including the playoffs, we knocked off Calgary, and broke a streak [winning the Hardy Cup] they had going for six years. That itself was something special. From me possibly not having the opportunity to ever play again when I was concussed, and coming back, and us sneaking into the playoffs and making an unbelievable run, it was very cool.

M:Going back to the Uteck Bowl very briefly, take me through what’s going on in your head as you retake the ball with a minute and a half left to go, and a chance to win the game.

Yantz:I love those times. Your back’s up against the wall, and it’s time to turn the lights on and let go. At that point, when [Montreal] punted the ball, I was eager to get on the field, and I was excited about it. We drove 95 yards and got into a position to score, and it was something special. We put ourselves in the right position to win the game, and didn’t get it, but it was still a special thing to be a part of.

M:Now that the season, and your time as quarterback with Manitoba is over, what do the next few months have in store for you? Are you planning on staying here, or going back home?

Yantz: At this point, I’ve lived away from home my whole entire life, and realistically if someone were to ask me where home is, I would say my life is here. I’m a registered Manitoban. I want to find work, and stay here and train, and get ready for the CFL draft. If the draft doesn’t work out for me, and I don’t get a shot, then I’m most certainly going to pursue my electrician career, but as of right now, I’m going to keep training, and see what that brings.

M:What would it mean to you to get an opportunity in the CFL?

Yantz: Whether someone decides to give me a shot or they don’t, I’m going to keep on training, and keep my head high, and hope that I do get a chance. At this point I love football, and I’ve been doing this for the past 16 years, and this would be the ultimate goal, to be a pro, and if it comes in front of me, I’m going to do it.