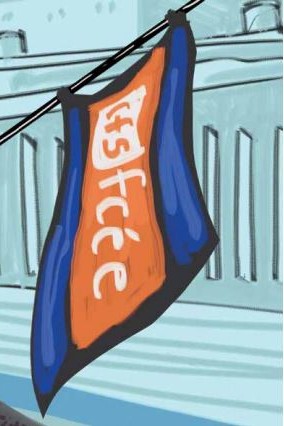 Last week I wrote an article for the Manitoban detailing an ongoing dispute between UMSU and the Canadian Federation of Students (CFS) over fees being withheld from the federation. Since then I’ve had conversations with a number of people who were either curious about the dispute or who simply had a strong opinion on the issue and wanted to talk about it. In these conversations one major theme emerged: few, if any, of the students I spoke to seemed to have a firm grasp on what the CFS is, or what membership in the organization means for them.

This lack of awareness of the CFS might seem troubling in light of the fact that last semester every University of Manitoba undergraduate student paid $7.10 in student fees meant for the CFS – it is troubling, but it shouldn’t come as a surprise.

What is the CFS?

The CFS is a national students’ union whose membership comprises over 80 member unions, representing over 500,000 students across the country. It is the largest member-driven student organization in the country. The Canadian Alliance of Student Associations is the second largest student union, with 22 members across the country, mostly centred in the Maritimes and Alberta. The Red River College Students’ Association is currently the only Canadian Alliance of Student Associations member in Manitoba.

The CFS is present in every province in Canada and has a particularly strong presence in Manitoba.

The University of Manitoba Graduate Students’ Association is still at odds about their membership status with the CFS. Since 2012, when questions arose about the validity of their initial entrance into the CFS, they have claimed to not be members of the CFS – a claim the CFS disputes. They continue to collect fees and hold them in trust, waiting until the issue is fully resolved to redistribute the funds for other purposes.

Each of the local student unions collects roughly the same amount of money on behalf of CFS.
Members of UMSU pay $7.10 per semester in fees to the CFS. The money is split with 40 per cent—or $2.84—going to CFS-MB and 60 per cent—or $4.26—going to the CFS.

The funds they obtain are used for lobbying efforts—on issues such as reducing and eliminating student debt, lowering tuition, and a wide variety of other social issues that they say impact students—researching and producing materials for campaigns, and organizing and providing services for students and member unions.

Membership in the CFS includes membership in three distinct corporate entities: the CFS, CFS-Services, and a regional CFS wing doing ground work in the union’s province (i.e. CFS-MB). CFS-Services is kept as a separate entity from the CFS for legal purposes. It exists to offer services to individual students and student unions who are members of the CFS.

According to their website, the services for individual students include benefits and deals through Merit Travel; the Student Work Abroad Program, which facilities work-travel experiences in one of 11 partner countries; access to free tax filing through ufile.ca; a student saver discount card; and eligibility for a free international student ID card, which provides access to a variety of other savings and would otherwise cost $20 for non-CFS members.

Services available to member unions include access to the National Student Health Network provided through Green Shield, Canada’s only non-profit insurance provider; an ethical materials network that allows member unions to purchase ethically created materials sourced through unionized and co-operative companies, including water bottles, T-shirts, pens, notebooks, shopping bags, and a variety of other items; and creation and printing of day planners, which are meant to save money through bulk purchases by the unions.

The lack of clarity in the student body as to what the CFS is and what it does for students is inherent to the dynamic between the local student union and CFS-national. Students are more directly engaged with the local when compared to the national student union. But it’s also been exacerbated by the bad blood between UMSU and the CFS, which goes back further, and much deeper, than the question of unremitted fees. The relationship has been strained by communication problems and deeply personal politics.

So far in the 2014-15 academic year, UMSU has not sent representatives to the CFS-MB executive council meetings held every month, suggesting they didn’t think it was a worthwhile investment of time. Meanwhile, both CFS and UMSU have said the other has been ignoring their emails and phone calls since early in the 2013-14 academic year.

This academic year UMSU has also found a new supplier for their agendas, a service which had previously been contracted to the CFS-Services through the ethical purchasing network the CFS oversees. In doing so they also left out materials normally printed in the agendas explaining what the CFS is and what it offers to students. This came after UMSU was prevented from switching suppliers for the day-timers the year prior, after being locked into a contract by the outgoing 2012-13 executive.

Lastly, UMSU has executed campaigns on campus independent of the campaigns previously developed and available through the CFS, which CFS-MB is responsible for helping to roll out. The University of Manitoba Students’ Union’s #NoMoreBlurredLines campaign, which launched this September and addresses sexual assault, parallels the No Means No campaign already operating with the support of CFS. There are certainly differences in how the issue is framed, with #NoMoreBlurredLines utilizing a broader, more sex-positive framing of the issue, having been recently developed with input from local students and faculty.

By finding another supplier to print their agendas, UMSU was able to reduce printing costs; omitting CFS materials from the agendas meant there was more space for branding of UMSU and to provide information about their own services. Developing campaigns from the ground up on campus means local students have more direct control over the framing of issues they choose to advocate.

Overall though, the trend has been towards UMSU taking on the responsibilities once tasked to the CFS, which has the two-pronged effect of reproducing efforts and cutting the CFS out of the campus. The result, inadvertent or otherwise, is students’ reduced exposure to and awareness of the CFS.

Even so, a lack of awareness on the part of U of M students is going to impede their ability to understand what the CFS offers and limit what they get out of their membership. It will also limit the student body’s capacity to have a serious discussion about the merits of membership.

Whether you’re a strong supporter or a steadfast opponent of the CFS and what it represents, having a student body with a clear understanding of what the CFS is and what services it provides is a good thing and should be a goal for both unions moving forward.