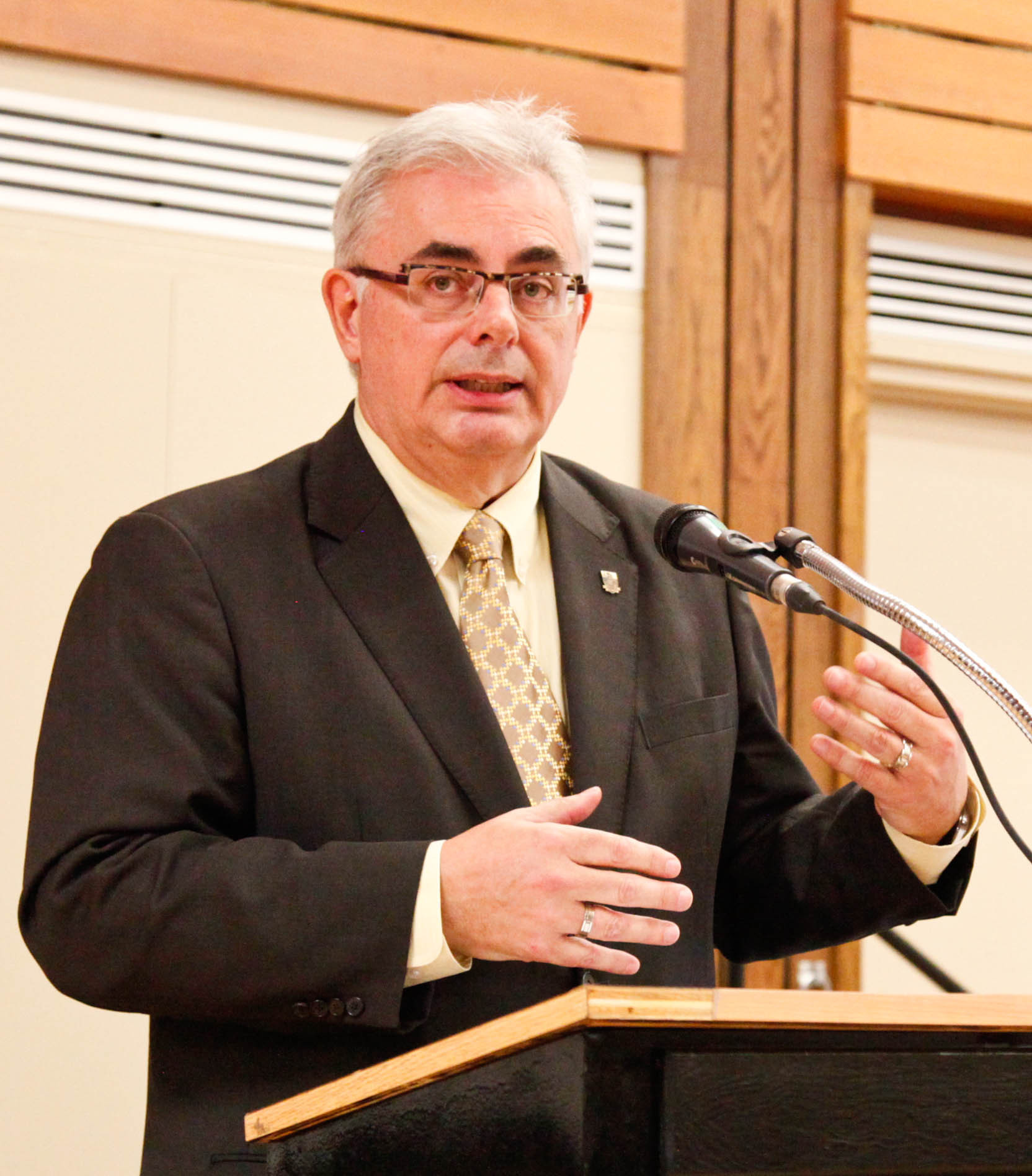 U of M president David Barnard Photo by Beibei Lu

University of Manitoba president David Barnard delivered a clear but controversial message to a room full of students, faculty, and staff last week – cuts are coming, but they’re necessary for the financial health of the university.

“We’ll make decisions with an emphasis on fairness [ . . . ] but some decisions will have to be made,” Barnard said.

“We need to find savings and not just delay the inevitable.”

University of Manitoba budget cuts will not be across the board, Barnard emphasized, meaning that some departments will be more affected than others.

“We have many classes that have very low enrolment, we have a range of success factors for how many students complete classes successfully and how many people complete their program successfully,” Barnard said.

“In the time that I have been here, which is now 6.5 academic years, we’ve added a lot of programs to the university. We have removed very few.”

When asked by the Manitoban about whether departments with low enrolment will face the brunt of the cuts, Barnard said, “That’s clearly a place to look.”

“It will not be solely a question of where is the largest amount of money to be found to free up. It needs to be a looking and saying, ‘What are the implications of this? What’s the impact of this?’”

The cuts have been justified by U of M administration as a necessary response to several financial constraints – namely low tuition, insufficient government grants, and rising faculty salaries.

Between 1999 and 2009, tuition fees were effectively frozen in Manitoba before the province allowed universities to raise tuition by up to 4.5 per cent in 2009 and five per cent in 2010.

The provincial government capped tuition fee increases at the rate of inflation in 2011, promising that it would raise the operating grant for universities by five per cent a year for the next three years as compensation for low tuition. The government reneged on that commitment in 2013 and has increased the operating grant for universities by 2.5 per cent in each of the last two years.

The unexpected drop in the increase rate of the grant precipitated over $10 million in cuts over the last two budget cycles. It also prompted Barnard to speak out against low tuition fees. Manitoba students pay the third lowest tuition in the country, around $2,000 less per year than the national average.

Barnard pointed out that increases in tuition and government grants at their current rates cannot keep pace with growth in faculty salaries, which already make up the vast majority of U of M budget expenditures.

The 2013-16 collective bargaining agreement (CBA) between administration and the University of Manitoba Faculty Association (UMFA) built in a 6.9 per cent salary increase over three years. The previous CBA over 2010-13 gave faculty a 4.4 per cent raise. In last year’s budget, required salary increases amounted to $17 million.

National trends
The University of Manitoba is not alone in facing budgetary challenges as universities across Canada are grappling with how to reduce their costs.

Ian Clark, professor in the School of Public Policy and Governance at the University of Toronto, has written extensively on the state of post-secondary education in Canada.

Clark argues that the primary problem for Canadian universities is how labour is distributed among faculty members.

The primary mandate for universities is to teach students but, according to Clark, faculty members generally negotiate a split in their labour that works out to 60 per cent teaching and other services, and 40 per cent research. This split is protected under their CBA and, when coupled with salary increases, severely constrains university finances.

“The whole collective bargaining framework needs to be re-examined as it applies to university faculty negotiations to see if adjustments can be made to increase incentives on both parties to come to an agreement that recognizes financial realities,” Clark said.

“Something has to give if you have faculty salaries increasing at higher than inflation, and tuition and government grants restricted to inflation or lower. What has been giving consistently, in Ontario and the rest of Canada, has been two main things; class sizes, more students per full-time professor, and more use of part-time teaching faculty who are paid less than half of what full-time professors are per teaching amount.”

Usher argues that universities, because they are constrained in their ability to lay off academic staff and are often obligated to pay out three or four per cent salary increases due to collective bargaining, often attempt to make cuts in non-salary areas. However, the non-salary budget “never amounts to more than 25 per cent” of the total budget, according to Usher.

“If you build that four per cent a year in on the academic side, and the non-academics tend to get something similar, and you don’t get four per cent increases from tuition and government revenue, then all the adjustment happens on that 25 per cent,” Usher said, adding that cutting those areas is not sustainable.

According to Usher, faculty unions across Canada bargain as though they are in a public sector environment, where the government can raise taxes to cover salary increases. However, universities have limited control over their own revenues, meaning that students end up covering the cost of faculty raises, he said.

“The students pay for it one way or the other, either through higher tuition or through lower services.”

Faculty response
The University of Manitoba Faculty Association (UMFA) maintains that faculty salaries have been declining relative to the budgetary surpluses that the U of M consistently transfers to capital assets.

Janet Morrill, associate professor of accounting and finance at the U of M, has spent years crunching numbers, along with her husband Cameron, for UMFA.

Morrill said she was critical of how much money the university transferred from its operating budget to cover capital expenditures, arguing that the transfers, which amounted to $49.5 million last year, are the real source of the university’s budgetary woes.

“Given that some of the capital expansion that we’re doing is coming at the expense of class sizes and class offerings, I would like to be sure that the choices that are being made are the choices that the students would make,” Morrill said.

While the faculty association cites several new capital projects as responsible for draining the university’s financial resources, including the over $4.7 million Welcome Centre and the over $45 million Active Living Centre, vice-president administration Paul Kochan told the Manitoban that the university faces over $300 million in deferred maintenance costs.

The Manitoban has published extensive coverage on the U of M budget cuts, including articles about the Stop the Cuts assembly in December, UMGA’S position, and UMSU’s report on the cuts.

Wiseguys closes its doors for good