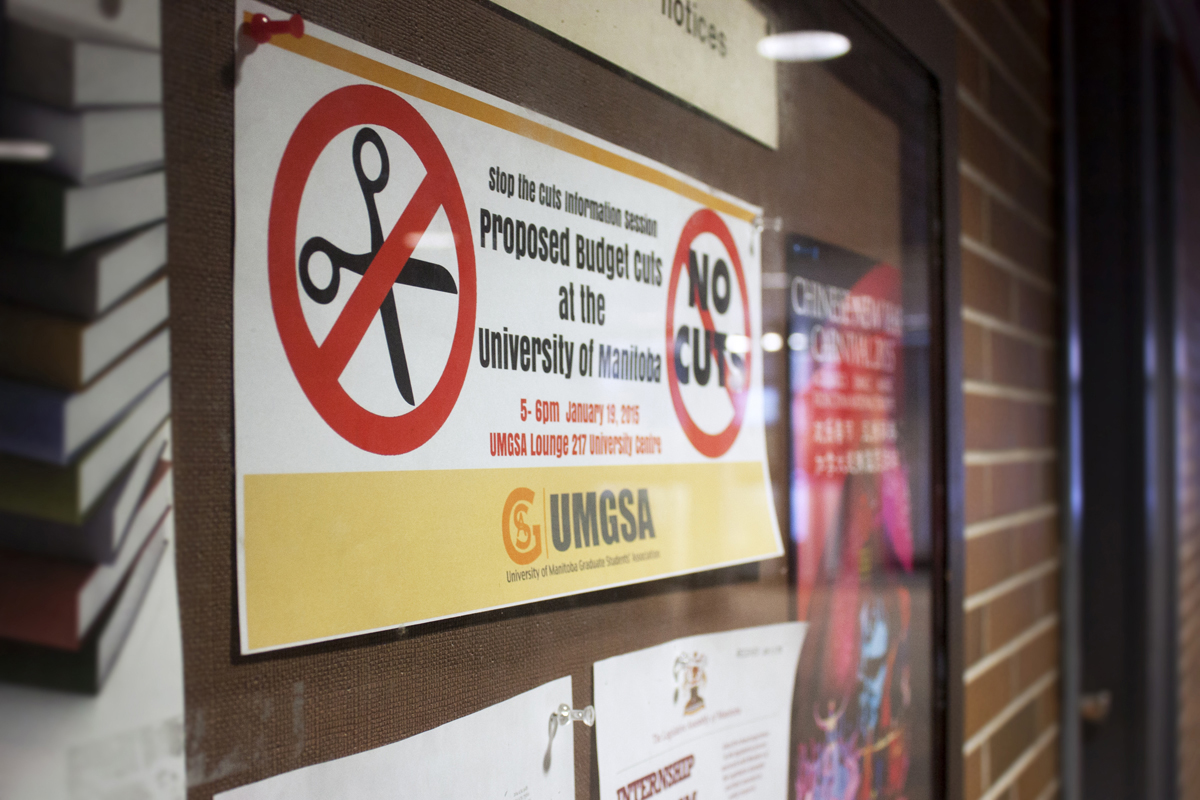 That attitude has since changed, with UMSU contributing some incidental resources like coffee and tables for CFS-MB to operate their Stop the Cuts campaign. Furthermore, UMSU had a Letter to the Editor published in the Manitoban clarifying their opposition to budget cuts at the U of M, which are slated to average four per cent this year and four per cent next year.

“Ultimately, UMSU is looking to support any student who has issue with something,” Kopp told the Manitoban last week.

“We believe in democracy, we believe in free speech, and UMSU has been, in its small way, supporting the Stop the Cuts coalition and facilitating that process as well, because every student should have a voice on campus.”

Unlike the U of M Graduate Students’ Association, which donated $1,000 to the campaign, UMSU will not be contributing any direct financial resources to the Stop the Cuts coalition, Kopp said.

As part of UMSU’s effort to oppose budget cuts at the university, it distributed a report to all undergraduate students at the beginning of the winter term titled “Understanding the Cuts: How the University’s Budget Cuts Will Affect You.”

The document, assembled by members of the UMSU executive with help from the organization’s policy analyst, Chris Rigaux, outlines some modern history of Manitoba tuition policy, as well as a summary of the claims of various stakeholders, including the U of M administration and the U of M Faculty Association.

“UMSU doesn’t have any interest other than representing the students that have elected us,” Kopp said.

“We don’t have any hidden agenda or outside interests in this besides representing our constituents,” he continued. “The University of Manitoba Students’ Union wants to make sure that all undergraduate students have access to the information they need to be informed on this issue.”

Zach Fleisher, chairperson for CFS-MB, told the Manitoban that the budget report is a valuable piece of information for students to access.

“If a student was asking for perspective [on the cuts], it is definitely a document I would encourage them to read,” Fleisher said.

“I don’t think these perspectives are finite, and as long as we’re encouraging a wide variety of perspectives on this issue, I think that’s important.”

The University of Manitoba Students’ Union consulted members of the university’s senior administration in compiling the report, Kopp said.

The report claims that academic programs or faculties are unlikely to close entirely, but that four per cent of cuts this year and next year will likely result in reduced hours of operation in the libraries, outsourcing of university services to private contractors, and less access to staff in various student services, such as financial aid.

“President Barnard has committed the administration to avoiding across-the-board budget cuts; however, he has also stated the cuts will be four per cent ‘on average’ across the entire university, meaning that even if the university avoids across-the-board cuts, the administration’s alternative is to require some units to take cuts of more than four per cent,” the report states.

“The university has been grappling with deferred maintenance costs—basically, capital projects that have been put off for lack of capital funding—well back into the 1990s. As funding dried up in the 1990s, capital projects (such as building maintenance, major equipment repair, and improvements) were delayed or deprioritized. This is exacerbated by the fact that the university’s buildings are in many cases several decades old and have greater costs to maintain than newer buildings.”

John Danakas, executive director of marketing and communications at the U of M, told the Manitoban that university administration encourages students to be informed about issues on campus.

“The university encourages students to remain informed of significant decisions and developments that take place on campus,” he said in an email statement.

“Students, through UMSU and faculty representation, have a voice in senate and on the Board of Governors, and so will help inform decisions around the budget. The budgetary challenges facing the university are real and require close attention.”

Cameron Morrill, associate professor of accounting and finance at the U of M, has been crunching the numbers for the U of M Faculty Association and the Stop the Cuts coalition since the budget cuts were first reported by the Manitoban in late 2014.

According to Morrill, the U of M consistently generates operating surpluses but transfers that revenue into its capital fund to pay for “acquisition of, or renovations to, buildings, land, office equipment and furniture, heavy equipment, etc.” Last year, the university showed an operating surplus of $43.3 million, but due to a $49.5 million transfer to the capital fund, the U of M budget came in $6.2 million in the red.

Furthermore, the U of M has built up $134 million in investments in corporate bonds through its general fund that are collecting interest rather than being spent on operating or capital expenditures.

Morrill also cites growth in administrative costs, particularly in the areas of marketing and communications at the U of M, as another culprit in the university’s current budget woes.

“Our priority should be teaching and research, because that’s really what we’re about,” Morrill said.