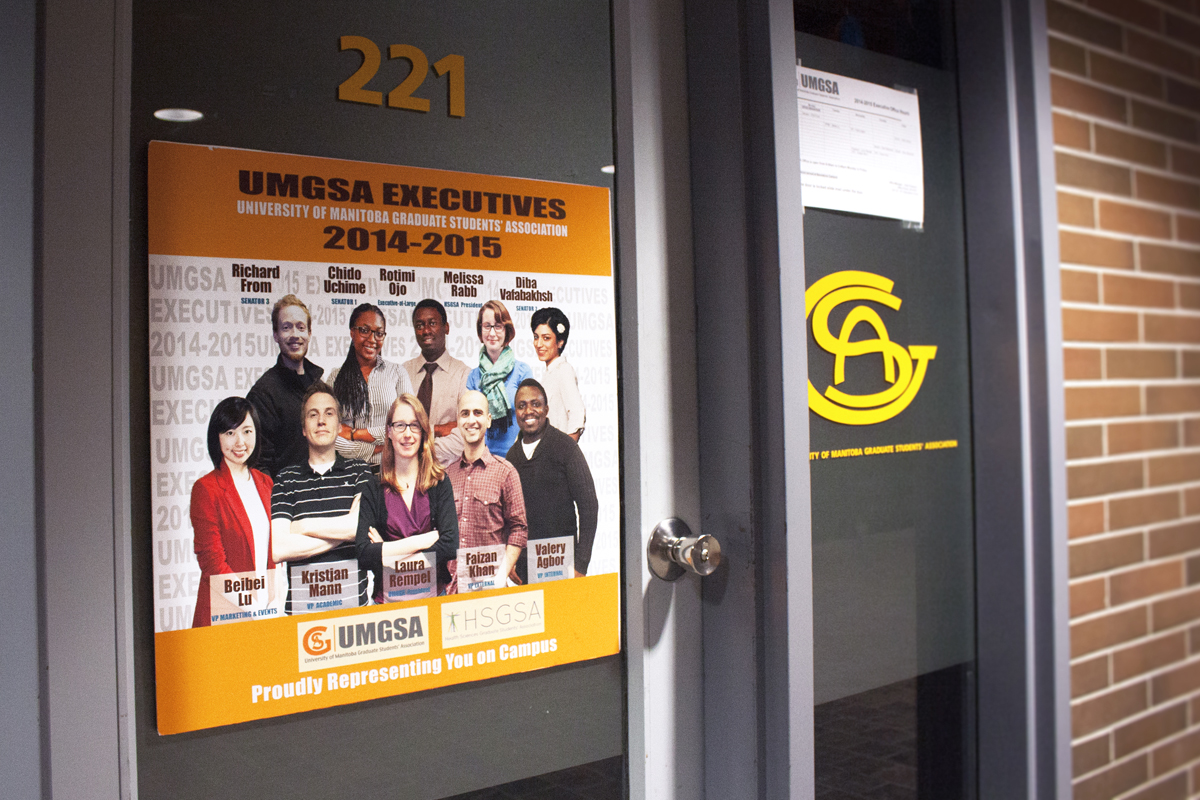 The vice-president external of the UMGSA resigned earlier this month, partly in protest over a donation made by UMGSA to the Stop the Cuts coalition – a campaign established by the Canadian Federation of Students-Manitoba (CFS-MB) to oppose budget cuts at the U of M.

“I believe in clear direction and strong leadership; unfortunately I received neither. Instead, I received a tremendous amount of pressure over the irreconcilable political differences I have had with the president,” UMGSA vice-president external Faizan Khan wrote in his resignation letter, sent to UMGSA Council at the beginning of January.

According to Khan’s letter, UMGSA Council expressed reservations about supporting the Stop the Cuts coalition in a November meeting on the issue. Despite these reservations, the UMGSA pressed forward with its support under the leadership of president Laura Rempel.

“I was asked by our president to assist CFS with running this campaign by chairing the anti-cuts meetings and such. Her rationale for asking so was that my participation would help decrease the workload on CFS officials, and ensure that ‘It does not look like it’s a CFS campaign.’ I could not comply with the president’s request, as our council showed reservations over joining the CFS-proposed coalition in its meeting held in November last year, and passed a motion to gather fact-related information,” Khan wrote.

“In spite of the council’s hesitation to support the CFS campaign, the president continued to support the anti-cuts campaign and promised CFS a handsome amount of $1,000 towards it. (Strangely, the CFS budget document shows $1500 [ . . . ].) This amount was allocated from the UMGSA campaigns budget; a rushed process which [was] neither presented to the campaigns committee that I chair, [nor] the finance committee.”

Khan did not respond to multiple requests from the Manitoban for comment. Furthermore, Rempel told the Manitoban that Khan is still serving as vice-president external despite his resignation earlier this month.

“This is an ongoing internal UMGSA matter being discussed with council members and parties involved. Therefore, we will not make an official statement at this time. When the issue is resolved we will communicate the outcome with our members,” Rempel said in an email to the Manitoban.

“I would like to clarify one thing: Faizan Khan is still a member of the UMGSA executive team.”

When asked to clarify how much money the UMGSA donated to the Stop the Cuts coalition, CFS-MB chairperson Zach Fleisher told the Manitoban on Jan. 16 that the organization donated $1,500 to the campaign. He later retracted that statement, saying that the amount donated was actually $1,000.

“We’ve been very pleased to work with [vice-president advocacy] Rebecca Kunzman from UMSU and Laura Rempel from the UMGSA,” Fleisher said.

The CFS-MB has contributed $2,000 to the campaign so far, according to Fleisher, and the organization is happy to have the support of UMSU after differences between the two organizations were uncovered by the Manitoban late last year.

Rempel told the Manitoban that both Fleisher and Khan were confused about the actual donation amount based on an error in the minutes taken at a meeting of the Stop the Cuts coalition late last year. At that meeting, Rempel floated the idea of a $1,000 UMGSA donation to the coalition.

According to Rempel, the entire UMGSA campaigns budget amounts to $1,500, which may have been the reason for the error in the minutes, in addition to the fact that the Stop the Cuts meetings are more informal than official UMGSA Council meetings.

Rempel said that she subsequently corrected the minutes at the next meeting.

Khan sent his letter of resignation on Jan. 9, the same day that Rempel received the results of the vote, which approved the donation.

Rempel added that the Stop the Cuts coalition is an important grassroots initiative deserving of the UMGSA donation.

“It’s important to contribute to a process to hold the administration accountable and have student voices heard,” Rempel said.