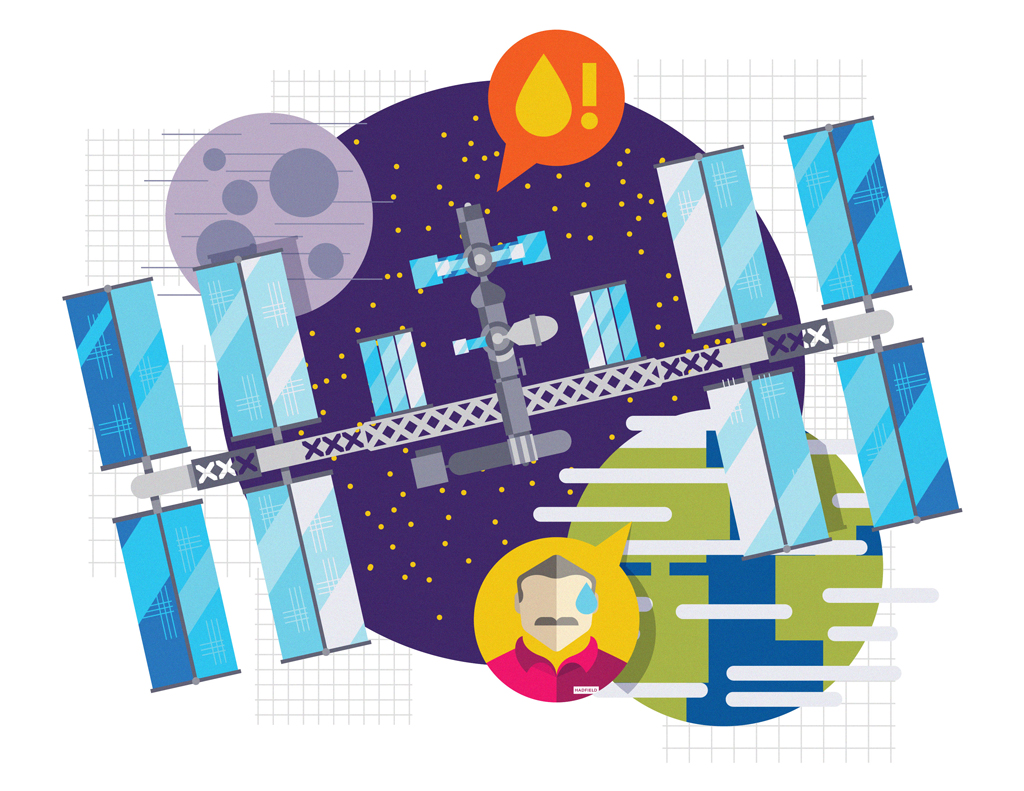 Six astronauts onboard the International Space Station (ISS) have returned to normal operations after a glitch on Jan. 14 indicated ammonia was leaking into the American module of the orbital research centre. It is thought that a computer error or a faulty sensor is the cause of the false alarm.

Ammonia is a compound that is frequently used in fertilizer or in refrigerator coolant. Onboard the ISS it is used to help regulate temperatures of the station. Since the ISS is a closed environment, when chemicals like ammonia begin leaking into the modules the astronauts onboard have to act quickly to protect themselves. The chemical presents a fire and explosion hazard at a 15 per cent concentration and is harmful when inhaled.

The crew is said to have been managing the arrival of cargo from a SpaceX capsule, which contained supplies and experiments, when the alarm went off. The astronauts proceeded to put on breathing masks, and sealed themselves in the Russian segment of the space station, closing a hatch which separates the modules.

Colonel Chris Hadfield, former commander of the ISS and celebrity Canadian astronaut, responded to the news via social media. “[Ammonia] is an excellent coolant, but it is poisonous to breathe. If it breaks through to the inside it is one of the big 3 emergencies. The other two we train for are fire/smoke & leak/depressurization,” wrote Hadfield on his Facebook page.

Had this been a real ammonia leak, Hadfield explained, procedures would be to vent the ammonia into space, repair the source of the leak, and have a new supply of ammonia sent to the space station. A secondary cooling system exists onboard the station that would have kept the space station’s overall cooling systems operating at half capacity.

The ISS has been operational for over 14 years, having had a crew onboard since 2000. It orbits above the Earth between 330 to 410 km and is the result of an international collaboration. The space station is comprised of 13 different modules with two scheduled for addition in 2016 and 2017.

The ISS has had several instances of unexpected failures or problems since becoming operational. However, astronauts are highly trained and thoroughly prepared for emergencies in space.

Jan. 2, 2004 – An air leak was detected onboard the station, expelling five pounds of air into space. The source of the leak was a vacuum hose, caused by astronauts using the hose as a grip.

Sept. 18, 2006 – A potassium hydroxide leak activated smoke alarms, leading the crew to believe there may have been a fire. The leak was repaired and a charcoal filter used to ventilate the space station.

June 14, 2007 – Condensation caused the short-circuiting of the electrical system to shut down several computers, which operated thrust, oxygen generation, and carbon dioxide filtration as well as various other systems. Without oxygen generation, the crew had 56 days of oxygen available on the space station.

Aug, 1, 2010 – A failed ammonia pump module resulted in cooling Loop A to fail and left the cooling system at half capacity. Three extravehicular activities (EVAs), when an astronaut leaves a spacecraft, had to be carried out. The first EVA was to replace the faulty pump but was not successful; the second EVA was to complete the replacement of the faulty pump, and the third was to restore the cooling system to normal operations.

June 28, 2011 – Space debris was identified in near proximity to the space station, prompting crew to board the Soyuz capsules until the danger had passed.

May 9, 2013 – Crew noticed white flakes outside of the space station, which was determined to be ammonia leaking into space. An EVA was carried out to replace the leaking component.

Most safety occurrences on the space station have only resulted in minor disruption of routine activities, reduced capabilities, or, at worst, forced crew members to retreat to Soyuz capsules. In the event of an emergency, the crew would evacuate the space station.

With regards to ammonia leaks and how astronauts prepare and respond, Hadfield wrote, “I lost count of the number of times that we practiced this exact procedure in the simulators in Houston. Serious risk requires serious preparation.”

40 years strong for Plug In