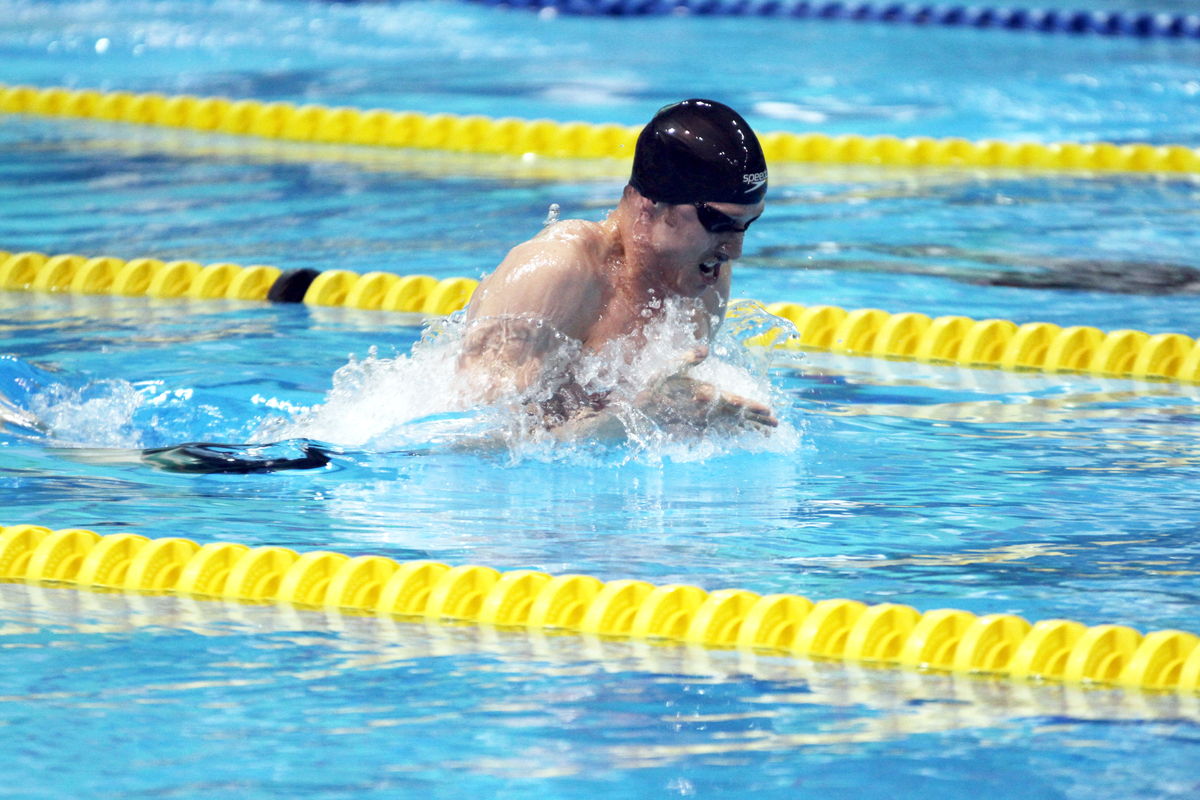 Dillon Perron is no stranger to the pool. The native of Lac du Bonnet started swimming when he was six years old, and moved to Winnipeg in grade nine in order to train with the Manta Swim Club at Pan Am Pool. He stayed with Manta until he graduated from high school, moving onto the Bisons from there.

The training schedule for Perron during high school was fairly intense. He would go to the pool every evening after class for three hours, and participated in morning sessions four times a week.

While he was able to balance school and training fairly well in high school, his first year of university was a larger adjustment.

“My first year at the university was very tough,” Perron said. “It was sort of a new adjustment for me to actually have school with that regime, and that first year didn’t work out the best for me.”

Perron ended up taking a full year off from school, which resulted in a loss of two years of eligibility, as players needed to have 18 credit hours from the previous year to continue competing at meets, which Perron didn’t have.

Despite losing his eligibility for an extended period of time, Perron continued to hone his craft at the university.

“During that time I was just swimming with the club at the university,” Perron said. “Nothing majorly changed for me, except that I couldn’t swim at university meets.”

The winter of 2012 was Perron’s last semester as an ineligible swimmer, and once he returned to the university circuit in the fall of that year, records began to drop.

Perron started off by placing first in the 50- (28.05 seconds), and 100-metre breaststroke (1:01.32 seconds) at the 2012 Canada Cup, held in November of that year – a score that shattered both the Bisons’ and provincial records. He also qualified for the CIS swimming championships that season.

Perron credited his attendance at the 2012 Olympic trials, held in March in Montreal, as one of the big factors that changed his mindset once he returned to competition in the fall.

“That sort of opened me up to a whole new world of swimming,” Perron said of the event.

“I’d already been swimming for 15 or 16 years at that point, but I’d never really been to a meet quite as emotional as that. As focused as I was with the sport at that time, it was even more so after that.”

Perron has kept his drive going ever since. He’s had a number of notable performances, including placing third in the 100-metre breaststroke at the 2014 CIS championships. His bronze medal was the first hardware for a Bison at the national competition since 2006.

Perron plans to continue swimming after his university career ends next season, with the ultimate goal of making a national team. Considering the adversity that he has already battled through, it wouldn’t be a surprise to see him continue to surge forward.

Serhan feeling right at home with the Bisons