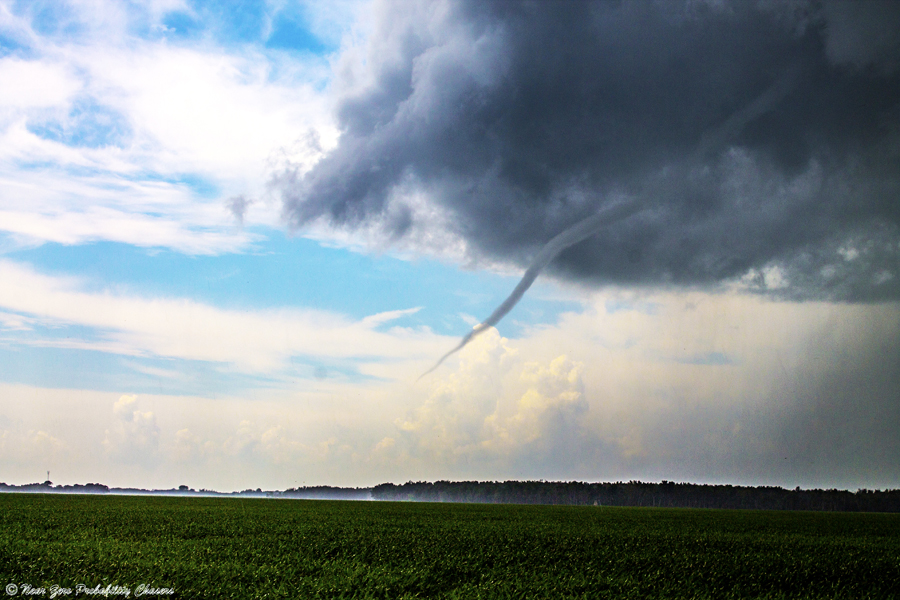 The upcoming documentary, The Reality of Storm Chasing, set to be filmed by local storm chaser Francis Lavigne-Theriault, chronicles storm chasing experts in the United States and Canada.

Lavigne-Theriault, a University of Manitoba atmospheric sciences student, experienced his first storm chase in 2010 on a road trip in the Southwestern United States. On a whim, Lavigne-Theriault and his father took the hours-long drive from New Mexico to Oklahoma after a big tornado was forecast for the state.

“We were seeing massive mountainous thunderstorms on the horizon and so we started heading in their general direction when we met up with a [never-ending] line of chasers. Literally hundreds of cars passed us! We followed them until we saw a tank heading into the storm,” Lavigne-Theriault told the Manitoban.

“We then saw a large stovepipe tornado cross the road about 200 metres in front of us! After that, we realized how dangerous this was with the limited information we had and so we left. From that moment on, I was hooked.”

Four years later, storm chasing is still as exciting for Lavigne-Theriault as that first encounter.

Lavigne-Theriault is the founder of the group NZP Chasers – the acronym stands for “Near Zero Probability,” meaning they will chase even if there is a near zero probability of a tornado. The group chases in the United States and Canada.

Lavigne-Theriault plans to capture storm chasing in the Prairies on a documentary slated to film next spring and summer. The Reality of Storm Chasing will compare storm chasing on the Canadian Prairies and in the U.S.’s tornado alley.

“The main purpose of this documentary is to tell the untold stories of Canadian storm chasers. There are so many chasers in Canada and Manitoba that nobody has heard of before (including me), and these chasers have amazing stories to tell,” said Lavigne-Theriault. “We would also like to share the kind of severe weather research being done in Canada and what are the plans for the future.”

Manitoba and U.S. storm chasers will be interviewed for the documentary, as well as Tim Marshall, a structural engineer who examines the aftermath of tornadoes.

“[Marshall’s] data and experience is critical in better structural engineering of buildings and houses to withstand straight-line winds and tornado winds,” explained Lavigne-Theriault.

The documentary will cover ChaserCon, a conference for storm chasers and severe weather researchers, taking place this February in Denver.

The Reality of Storm Chasing will also focus on “humanitarian aspects” of storm chasing: the emotions and reactions of storm chasers.

Lavigne-Theriault told the Manitoban, “We want to show you what happens behind the camera instead of simply showing you a video of some tornado.”

Lavigne-Theriault set up an Indiegogo campaign last month to raise money for this project, with a goal of $3,000. Funds will go to rental vehicles costs and equipment such as several GoPro cameras, camera mounts, and tripods. If more than $3,000 is raised, a paramedic will join the team in May to help in disaster relief efforts in case NZP Chasers are ever the first responders to a natural disaster in the U.S.

Lavigne-Theriault also hopes to share the love of storm chasing and the connections formed between storm chasers.

“This project is far beyond a simple campaign donation,” said Lavigne-Theriault. “It is greater than ourselves.”

The Reality of Storm Chasing’s Indiegogo campaign ends Dec. 4. For more information on the documentary and how you can help with fundraising, visit indiegogo.com/projects/the-reality-of-storm-chasing-a-documentary and nzpchasers.webs.com