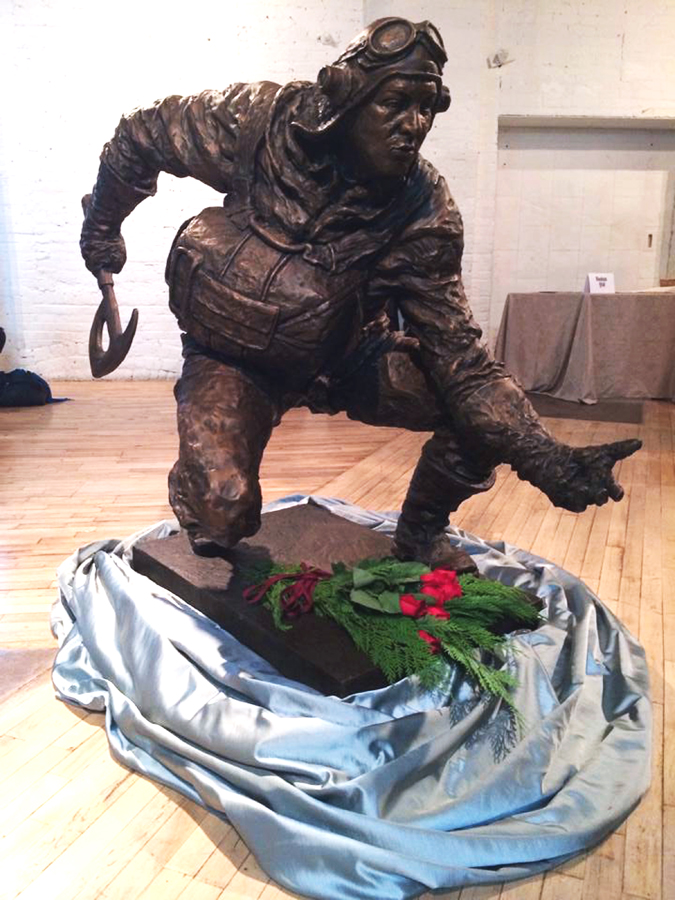 During the week of Remembrance Day, an exclusive preview of the Andrew Mynarski bronze monument was revealed at the Frame Arts Warehouse. The bronze sculpture was created by local artist Charles Johnston in commemoration of the valour of Royal Canadian Air Force (RCAF) Pilot Officer Andrew Charles Mynarski VC.

Mynarski was born in 1916 to Polish immigrants and raised in the North End of Winnipeg. He enlisted in the army before volunteering for the RCAF. He rose to the rank of pilot officer during World War II.

The story of Mynarski’s heroism begins on the evening of June 12, 1944. The RCAF 419 “Moose” Squadron of Lancaster bombers took off from England, bound for a bombing run in France to support the D-Day invasion on June 6. Mynarski manned the mid-upper machine gun and his best friend, Pat Brophy, was the plane’s tail gunner.

Over Cambrai, France, the Lancaster came under enemy fire from the ground and then from night fighters. The Lancaster was set ablaze and the pilot ordered the crew to bail out, but Brophy was trapped in the rear gun turret. Mynarski—without concern for his own life and safety—crawled through the flames to save his friend.

After several attempts with a fire ax to break through into the jammed rear turret, Mynarski was still unable to free Brophy. Brophy signalled that Mynarski should save himself. With his uniform and parachute on fire, Mynarski backed away, saluted his colleague, and bailed out from the doomed plane.

Mynarski died of his severe burns in the early morning of June 13, 1944. Miraculously, Brophy survived the impact of the aircraft and reported the tale of Mynarski’s selfless act of friendship.

For his bravery in the face of death, Andrew Mynarski received the Victoria Cross posthumously on Oct. 11, 1946 – the highest award for valour in the British Empire.

There are other memorials dedicated to the Winnipeg hero. At Valiants Memorial in Ottawa, there is a bust of Mynarski. A Lancaster bomber at the Canadian Warplane Heritage Museum in Hamilton is detailed with the Lancaster KB726 markings, just like the one in which he flew. There is also a monument at Durham Tees Valley Airport in England, the air force base from which Mynarski departed on the fateful flight.

In Manitoba, there is a junior high school, as well as a chain of three lakes, named in dedication of the pilot.

However, up until now there has not been a monument dedicated to Mynarski in his hometown.

“I’ve been thinking about this sculpture for many years now, all the while trying to find the pose that best describes his story, what it symbolizes,” sculptor Johnston told the Manitoban.

“I chose the moment when he decided to try and save his friend, Pat Brophy, at the risk of his own life.”

In the bronze monument, Mynarski is portrayed crouching down, fire ax in one hand, with his other hand reaching outwards.

As a sculptor, painter, and muralist in Winnipeg for over 25 years, Johnston felt honoured to sculpt the monument of the WWII pilot.

“It was a great experience; as a local artist capturing a local hero in our hometown, it doesn’t get much better than that,” Johnston explained to the Manitoban.

The sculpture memorializes the life and altruism of Mynarski, but perhaps it also celebrates a generation motivated to valiant action. Johnston’s art depicts a man trying to save a friend and inspires all of us with this example of selfless sacrifice.

Charles Johnston’s bronze monument of Mynarski will be dedicated in Vimy Ridge Memorial Park on June 12,2015 on the 71st anniversary of the flight.