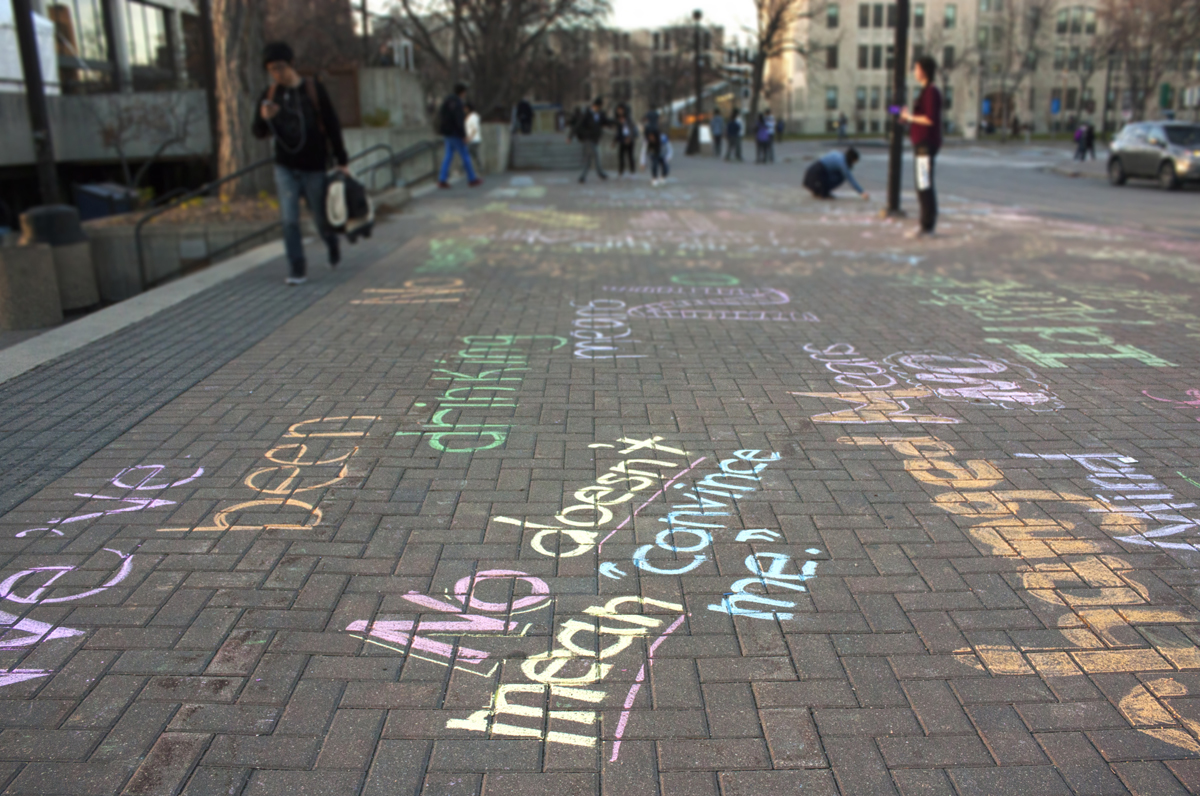 Last Thursday, Oct. 30 University of Manitoba students used chalk to write messages about consent and rape culture in front of University Centre as part of the No Means No campaign.

The campaign—which is being run in co-ordination with the Canadian Federation of Students—works to address sexual assault and rape culture on campus.

About 15 volunteers showed up to take part in the event, with additional passerby students stopping to leave their own messages on the pavement.

The idea of writing messages raising awareness about rape culture with chalk on the sidewalk in front of University Centre was suggested by Reanna Blair, the UMSU women’s representative.

“It’s a topic that’s very relevant to Canadian society and that’s why I decided to bring it to the U of M campus,” said Blair.

Over the course of just a few hours, hundreds of consent-related messages were written all over sidewalks on campus.

“It was crazy just how many people took time out of their day just to stop and read and ask questions,” said Blair, who added that many people took pictures of the chalk and asked to write messages that they believed were relevant.

One of the students who volunteered to write messages, Marina Herscovitch, said that she heard about the event through Blair.

“I thought it was a good cause to stand behind,” said Herscovitch.

“I think that it was an interesting and creative way to get the message out there; it really caught your eye.”

It is important to start conversations about consent because it can often be a difficult subject to discuss, said Womyn’s Centre co-ordinator Hira Sabzwari, who worked with Blair on the campaign.

“The goal of the campaign is to raise awareness and eliminate rape culture on campus,” Sabzwari told the Manitoban.

The campaign was well-received, according to Sabzwari, which was surprising to her in light of recent vandalism to posters for the #NoMoreBlurredLines campaign that conveyed similar consent-related messages.

“I think it’s really unfortunate,” said Sabzwari. “I was given some photos of the vandalism itself and a lot of [the messages left by the vandals were] referring to the way a woman is dressed.”

“I think the big issue with this is that people aren’t properly educated on the facts,” said Herscovitch. “If people had a better understanding of how others feel when you treat them a certain way, there would be less ignorance and ideally less vandalism.”

Our society has a long way to go when it comes to eliminating rape culture, according to Blair.

She said that people often do not see rape culture when it happens because they may not personally experience sexual harassment, but it is a reality for a lot of women and men.

“The fact that rape culture is so hidden and insidious makes it that much harder to treat, and we need to collectively work together to solve these types of issues,” said Blair.

When asked about the recent #NoMoreBlurredLines vandalisms, Sabzwari said, “It just shows that there are a lot of ideas around the issue of consent that are still very negative and harmful that we need to find ways to approach.”

As for future events to raise awareness about consent, Sabzwari told the Manitoban that the Womyn’s Centre is in the process of organizing an event in collaboration with the health and wellness educator on campus as well as the Women’s Health Clinic that will focus on issues surrounding consent.

“I definitely hope to see more events like this in the future that will bring a really visual awareness to these types of issues,” said Sabzwari.