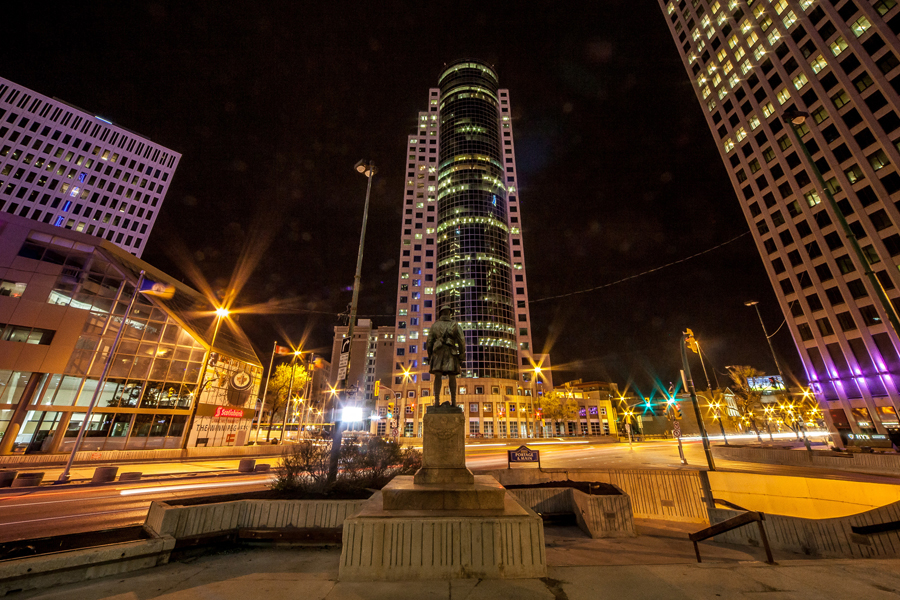 Winnipeg is under new management, and citizens, along with University of Manitoba students, can expect big changes over the next four years.

That is the message of mayor-elect Brian Bowman, the 43-year-old privacy lawyer. With 111,504 votes (47.5 per cent) Bowman won the race for mayor last week over a crowded field of candidates that included former frontrunner Judy Wasylycia-Leis, a past New Democratic Party member of parliament and member of the legislative assembly.

“This was a clear demonstration that Winnipeggers were ready for positive change,” Bowman told the Manitoban.

“You can win a campaign without having to sell out and become part of the problem and part of the old-school negative politics that previously [have] worked and been very effective.”

Bowman, who proposes to raise property taxes no more than the annual rate of inflation, ran on a detailed platform that included a plan to bolster investment through a bigger tax break for small businesses and a vow to have all six of the city’s proposed bus rapid transit lines built ahead of schedule, by 2030.

In a month that will see a critical referendum period on the U-Pass—a subsidized bus pass for University of Winnipeg students and University of Manitoba undergraduate and graduate students slated to be included in the cost of tuition—the mayor-elect expressed support for the student-led proposal.

“I fully support it and I’ll do whatever I can to make sure that it happens sooner rather than later,” he said. Bowman added that bus rapid transit—including transit-oriented housing and commercial development—is an integral part of his agenda for the next four years.

“For those Winnipeggers concerned with suburban growth and suburban sprawl, this really is a significant piece of the puzzle when it comes to growing up as much as we’re growing out.”

Bowman has big plans on issues that resonate with students and young professionals: high-density development, a strengthened technology sector, and an improved transit system. Two experts interviewed by the Manitoban—political analyst Curtis Brown and city politics expert Jino Distasio—argued that the mayor-elect could face an uphill battle to fund these measures without a substantial tax increase – let alone to get them passed by city council.

“He has no specific political experience,” said Brown, vice-president at Winnipeg-based polling firm Probe Research. Brown added that the city faces a severe budget shortfall in 2015.

“This is his first full-on, true elected office and I think there is going to be a very steep learning curve for him just in terms of figuring out how things work and how to get his agenda passed.”

In addition to these changes, city hall governance is slated to change considerably under Bowman.

The mayor-elect has vowed to only appoint councillors to his executive policy committee (EPC)—the mayor’s de facto cabinet—that are elected by a majority council vote. This means that, unlike his predecessors, he will be unable to handpick the members of his inner circle.

“The mayor is a pretty powerful person, but at the end of the day they have one vote,” said Distasio, associate vice-president of research and innovation at the University of Winnipeg. Distasio argued that relationship building will be crucial to any policy success Bowman may have over the next four years.

“He needs to figure out a way to surround himself with councillors—regardless of EPC or council floor—that are going to support his ideas.”

Bowman expressed optimism in his abilities: to work with council to get his long list of priorities accomplished and encourage educated young people to stay in Winnipeg after they graduate from university or other post-secondary institutions.

“There is no single answer to attracting or retaining the best and brightest young minds in the city,” said Bowman, a U of M alumnus.

“But really it’s going to come down to making sure there’s a growing, thriving economic development initiative and a lot of good, high-paying jobs here in Winnipeg.”

According to data from the Canadian Socioeconomic Information Management System database by Statistics Canada for 2011-2012, four major prairie cities—Regina, Saskatoon, Edmonton and Calgary—have experienced a net gain in migration among people between 20-29 years-of-age. On the other hand, Winnipeg has experienced a net loss.

“We supported the vote and the democratic process but we certainly did not endorse a candidate because we knew we’d have to work with whomever won,” said Al Turnbull, UMSU president.

Turnbull added that he is hopeful UMSU can work with Bowman and new St. Norbert Councillor Janice Lukes when it comes to the U-Pass and other transit initiatives.

“That was a staunch contrast with the UWSA but, mind you, they wear their colours a little bit bolder or more apparently than we do here. We try to be inclusive to all students because we know a lot of the students have voted for different candidates across the board.”

He added that left-leaning candidates like Jenny Gerbasi (Fort Rouge) and Ross Eadie (Mynarski)—both backed by the provincial NDP in 2010 and the Canadian Union of Public Employees and the Winnipeg Labour Council in 2014—better fit that description.

A new face for St. Norbert
St. Norbert—the city ward that includes the U of M—also has a new councillor after last week’s election.

Janice Lukes, a former community assistant for past St. Norbert councillor Justin Swandal, won the seat. Lukes told the Manitoban she is committed to working with UMSU and other student groups to facilitate greater communication between students and city council.

“I would like to be able to regularly engage and understand what some of the student issues and challenges are and opportunities they see,” she said, adding that the key to keeping young people in Winnipeg is economic development.
“We have to have job opportunities. So this council, going forward, we must focus on economic development and generating economic revenue that will help us create a vital, exciting city to live in.”

“If he is thinking that far ahead, that inspires me,” Lukes said of Bowman’s plan to build the six-bus rapid transit lines by 2030.

Society at crossroads with the mentally ill