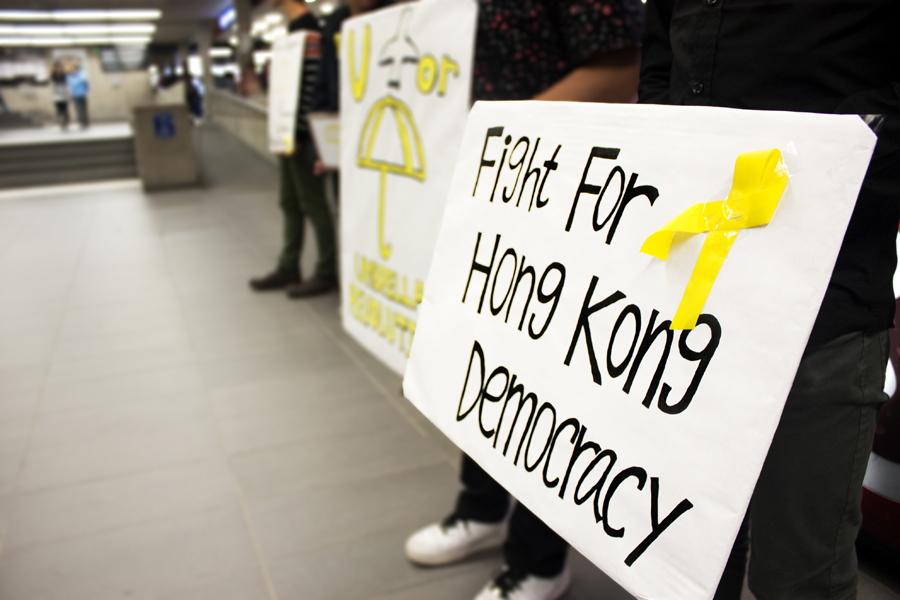 The government in Hong Kong declared that Monday, Oct. 6 was the deadline for pro-democracy demonstrations since university students recently boycotted their classes and students, professors, and citizens alike occupied the highways and streets outside government offices.

Since Sept. 22, people have been taking part in a pro-democracy protest to counter what they believe to be Hong Kong’s ineffective electoral system and to seek political reform.

Over the past week in Hong Kong, tens of thousands of discontented students and citizens have taken to the streets outside government offices to challenge decisions made nearly 2,000 kilometres away in Beijing about how elections will be run in the semiautonomous territory of China.

It has become the biggest public demonstration in the history of the business and financial hub of Asia, according to Daniel Ng, University of Manitoba alumni who graduated last term with a degree in politics and a minor in geography.

“I can assure you that there has never been anything bigger in Hong Kong,” Ng told the Manitoban.

A dedicated group of U of M students with ties to Hong Kong have organized in solidarity with those back in their home country. Around 10 students had initially met, and then they approached the Hong Kong Students’ Association to seek their support and involvement.

The group is composed of mostly students and alumni from faculties across campus including the sciences and arts.

“Most of us are U of M students [or alumni] and International College of Manitoba students,” said U of M geography student Jo Tse.

By setting up a table in University Centre with news footage of the protests rolling on a television, and pamphlets and signs demanding democracy and a more fair electoral system, these students hoped to draw attention to and inform others on campus and in Winnipeg about the situation in Hong Kong.

“Canada is made up of a lot of immigrants, and lots of people are from Hong Kong or have ties to Hong Kong. Everyone at the table [in University Centre at the U of M] has some relation to Hong Kong,” said Tse.

“We had to do something.”

“I’m here to raise awareness for supporting our protest activity in Hong Kong,” U of M student Jacky Lam told the Manitoban.

The origins of the recent political movement date back to when Hong Kong was once a British colony – before the handover, which entailed Britain transferring power of Hong Kong over to China in 1997.

The British and Chinese government agreed that, ultimately, Hong Kong would be a democratic territory. Ng told the Manitoban that this was a promise made in the joint declaration by both governments. It is also written in the constitutional document of Hong Kong and basic law.

“Being a colony, we cannot vote,” explained Tse.

“[After the handover], both sides promised that there would be a high level of autonomy with two systems in one country – one country of China, two systems of governance. But, things have changed. It’s not that different anymore.

“What we feel is that the level of freedom that we have been enjoying is going to be restricted,” Tse said. “We feel threatened by that. The instructions are coming from the Chinese government – elections are part of freedom and democracy.”

Initially, a couple thousand students had attended a general assembly meeting held on one of the university campuses in Hong Kong. Based on the outcomes of that meeting, “The reason for the first occupation,” Ng explained, “is because the students didn’t see any signs of direct dialogue between them and the government, so they decided that they were going to the headquarters.

“[The students] occupied what we call the civil square, which is right next to the headquarters of the Hong Kong government. And of course, the police came in and arrested some students, but then more people came and they started occupying on the streets nearby,” said Ng. “Then the riot police came, they used pepper spray and tear gases trying to disperse the protest, but the protesters stood their ground.”

The standoff—which has clearly involved animosity between riot police, protesters, and anti-protesters—is ongoing.

The top leader in Hong Kong, Chief Executive C.Y. Leung, had declared Monday, Oct. 6 in Hong Kong as the deadline for demonstrators to clear the streets. According to various news sources, the chief executive called on the protesters to end the occupation and disperse from the streets and the highways so that classes may resume and government workers may return to work in their offices.

Up until now, the two sides have yet to reach an accord, but have agreed to continue the dialogue in a direct, mutually respectable manner.

The Hong Kong Federation of Students has laid out three conditions that they believe are necessary for future talks: ongoing dialogue, equal treatment of student leaders, and that actionable political change must incur from the talks.

Tse referred to the fact that the chief executive of Hong Kong is elected by 1,200 elected representatives who are part of an election council. These 1,200 people are elected by and represent all of Hong Kong – a total population of nearly 7.2 million people.

Tse expressed disappointment with the lack of fair representation in the current electoral system, stating that “maybe you can select or vote for [the members of the election council], but even if you elect 1,200 people, it is not representative.”

A new proposal was drafted for the political reform. Some Hong Kong citizens were unhappy with the draft proposal, as Tse further explained.

“People can vote, but the candidates for the head of Hong Kong would be screened by the Chinese government. So, technically, that is not really a free election. It’s like, ‘You’re allowed to vote, but I’ll let you choose between this person and this person.’

“The feeling is like you have been tricked, cheated by the government.”

Upon comparing the situation to the elections in Winnipeg, Tse said, “The candidates, maybe you don’t like all of them [ . . . ] but at least they go through a process; they’re not appointed by someone else far away who doesn’t know what is happening.”

Protesters upset with the first draft proposal are expecting and waiting for a new proposition from the government.

The deadline imposed by the government on protesters was to clear the streets by Monday morning in Hong Kong, but it is unclear what the demonstrators’ actions will be depending on whether a new draft proposal is presented – and whether or not they approve of it.

The crowd had dwindled down to around 100 protesters outside government offices at one protest site by early Monday morning, and only around 10 were situated outside the chief executive’s office. Elsewhere in Hong Kong, several hundred protesters remained – following clashes with anti-protesters and despite calls from organizers to retreat from that site.

“I want to have a self-determined future,” said U of M psychology student Enoch Chan.

“You don’t have to be a political studies student to realize that democracy is not the final answer to all problems,” Ng told the Manitoban. “But, I do believe that universal suffrage and a fair and democratic political system would do way better in holding the government accountable and responsible to these people.”

Ng noted that democracy “is not a western thing or a Hong Kong issue.”

“It is a universal, global value that all kinds of people deserve to have – a representative government.”

Ng added that, “I would just ask people here in Winnipeg to keep an eye on the situation.”

‘The little race that could’

Young and Arab in the age of revolutions