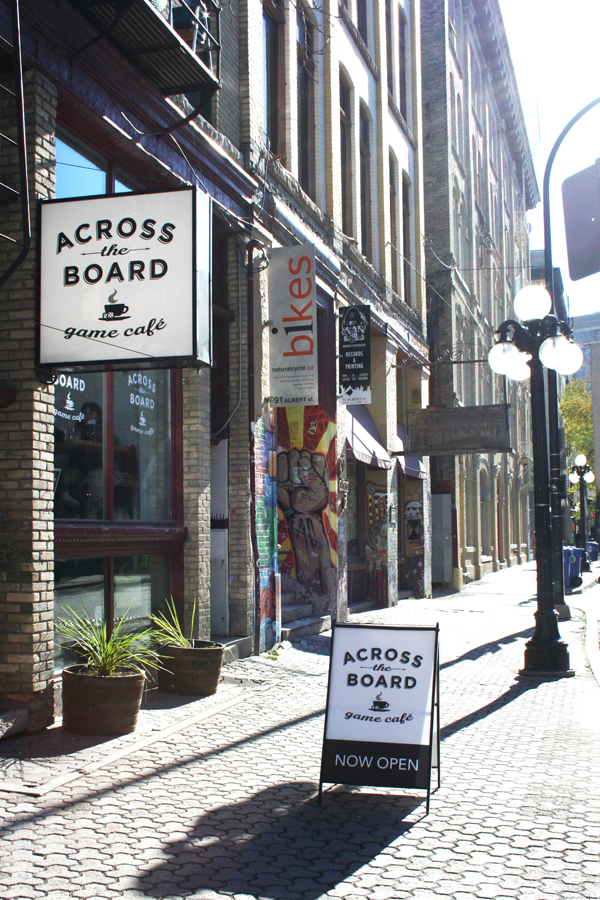 Guess who has delicious, fresh food; is in one of Winnipeg’s trendiest areas; and has upwards of 700 board games? Across the Board, that’s who.

Winnipeg’s newest board game café is located in the heart of the Exchange on Albert Street – a location that made perfect sense to Clinton Skibitzky, owner of the restaurant.

“Ideally we wanted something downtown for several reasons: it’s centrally located, and it’s also close to our other business, which has a certain practicality.”

Buzzing with culture, the Exchange district thrives on the unique. The buildings are, for the most part, repurposed – bursting with history and breathtaking architecture. Across the Board is no exception. Their building is over 100 years old, complete with spectacular moulding on the ceiling that perfectly tops off the restaurant.

The space is beautifully furnished, from the rich wooden tables to the chandeliers suspended from the ceiling, to the jaw-dropping board game library. 93 Albert Street is a work of art, as intended by the creators.

Upon visiting other, undisclosed game cafés across the globe, Skibitzky and business partner Olaf Pyttlik noticed what they consider to be a massive problem.

“A lot of them were kind of run down and had crappy plastic tables for people to sit at, and sold the kind of food that no one would really want to eat and weren’t licensed,” notes Skibitzky. “So it was the kind of thing that we said ‘well, if we were to do this, here’s a bunch of things we would probably do differently, and here are things that would appeal to our demographic’ [. . .] We wanted to have a real social atmosphere.”

It was also a priority to create a menu customers would actually enjoy.

“I wanted to have really good tasting food, really healthy food. As fresh as possible, prepared here, as much as we can. It’s a limited space so there are some really finite constraints with that,” Skibitzky says of the menu.

“From my perspective, when we started out and talked to [Chef] George, I wanted to have—in contrast to some of these other experiences we had where we went into an establishment in Toronto and we were playing a game and were hungry so ordered lunch, and the food was of a quality that if I went back there, I would go out of my way not to eat there—and that’s a problem I think”

The menu’s impressive diversity is matched and exceeded by the board game library.

Boasting an excess of 700 games—with another 55 on their way from Germany—there is something to pique everyone’s interest.

“There’s everything from a dexterity balance game, to a press your luck game, to a strategy game, to a combination of both, to something where you have roles and you’re bluffing with people,” says Skibitzky.

“There are probably about 10 to 12 different categories of games. And it’s important to have a good set of games in each of those categories. And then it’s important to have games that can be played by everyone from one person—we have a few that are just one player games— to two-player games, and it’s nice to have a good selection of those just because it suits people coming in; and then you ramp all the way up to games you can play with lots of people.”

The Exchange restaurant also flaunts a board game expert during the evenings.

“They identify what sort of game the customer should play based on how long they want to stay, who they’re playing with, and games they haven’t played before. And with the big selection, it’s nice to be able to go ‘here’s something new to you.’”

Across the Board has far exceeded Skibitzky’s original expectations – particularly the restaurant component.

“To be honest, a year ago if you had talked to me about this, we were making a game café that was also a restaurant. And I think it’s really changed to being a restaurant that’s also a game café. The restaurant has more than met its expectations that way; it’s been able to become as much of the identity as the games.”

Across the Board is located at 93 Albert Street. They are open from 11 a.m. to 10 p.m. on Tuesdays and Wednesdays; 11 a.m. to 12 midnight on Thursdays, Fridays, and Saturdays; and are closed on Mondays.

Death on the syllabus