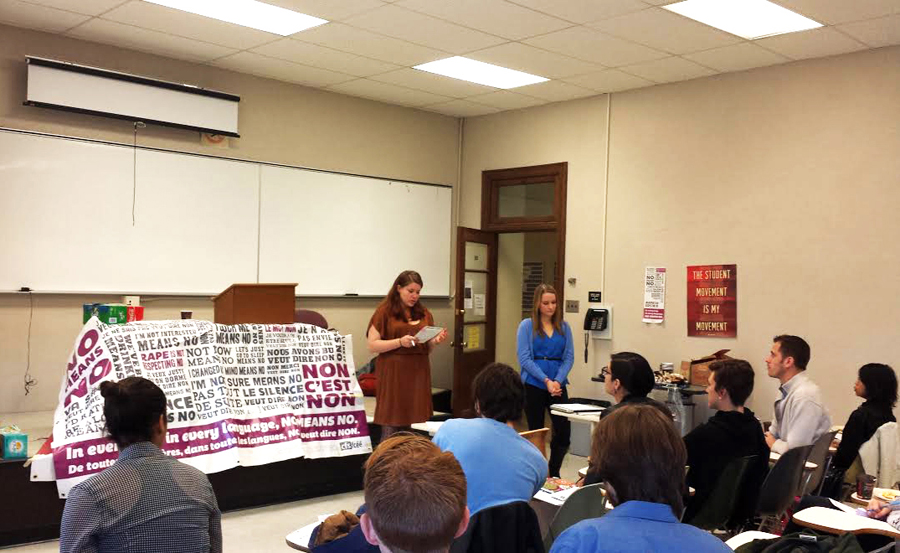 The workshops were hosted by CFS-MB at the U of M campus because it is the biggest campus in the province, according to Mitchell van Ineveld, deputy chairperson for CFS-MB and Minister of the Parlement Jeunesse Franco-Manitobain.

The featured workshops had been chosen based on topics voted on by the CFS earlier this year, said Zach Fleisher, CFS-MB chairperson.

“We tried to have workshops that reflected our provincial executive,” he explained. “This is just the beginning. We are using these workshops to recalibrate our campaigns and to direct them further for the year ahead.”

The workshops were not chosen based solely on interest, according to van Ineveld. He noted that there were many other topics that students showed interest in that could have easily been included in the program. Instead, he said the topics were chosen based on the availability of people who could host them.

“We had hoped to include initially more topics but were concerned that if we could not find the right people to offer those workshops, that it would compromise their quality,” said Allison Reimer, CFS-MB women’s commissioner and co-facilitator for the CFS No Means No campaign. Reimer explained that not every workshop will be of interest to everyone based on their different preferences.

“All of the issues that we try to address in CFS are directly affecting students, such as sexual assault and financial difficulties. It’s really crucial that students have a say in the running of our country and of our province,” said van Ineveld.

Despite the change-positive atmosphere, third-year honours philosophy student Ian McDonald, who attended the campaigns forum, told the Manitoban that he is worried that there is widespread apathy amongst students in Manitoba.

“We tend to use a lot of hypothetical talk in activism,” said McDonald. “There have been recent movements—both in Winnipeg and throughout the world—that have suffered from being pure momentum and enthusiasm.

“People like to get involved, get together, and complain about stuff. Some of these movements have even gotten loud enough to be heard, only to realize that they don’t know what to say,” continued McDonald.

“Others have had a goal in mind, but have instead not had any effect due to methods used.” He felt that the only way to have an effective movement is to have a concrete strategy with steps and goals.

“It can be hard to become active because activism can sometimes be intimidating to people,” added Reimer. “It’s great to start with things that you’re passionate about and read up on them, and if there’s a campaign that aligns with your morals and starts a fire in you, then that’s what you should be following.”

During the Education for All campaign workshops, co-presenter van Ineveld said that “anger is the tool of movements.” He encouraged students to read the news and find something that makes them outraged. “Whatever it is that makes you angry—whether it’s climate change or racial discrimination—start looking for organizations that are organizing around that issue.”

During the U of M Student Action Network workshop, Kunzman addressed UMSU’s new campaigns structure and their involvement with CFS. “We see [UMSU] fitting into this new structure as a supportive role and as a liaison in providing support to students who want to organize and create positive change for themselves, their campus, and their community,” Kunzman told the Manitoban.

The U of M Student Action Network was directed specifically at U of M students who attended the forum to promote student activism on the university campus. Kunzman said that she was “glad to see that there were so many student leaders from the U of M campus that got involved today and were excited to organize on campus.”

As part of his Education for All presentation, van Ineveld used the Campaign Cycles diagram to demonstrate what CFS deemed to be the necessary steps for a successful movement.

“We haven’t seen a lot of CFS activity on the U of M campus in the last couple of years and one of our big goals this year is to be on campus and really engage with students and get things moving,” Ineveld told the Manitoban.