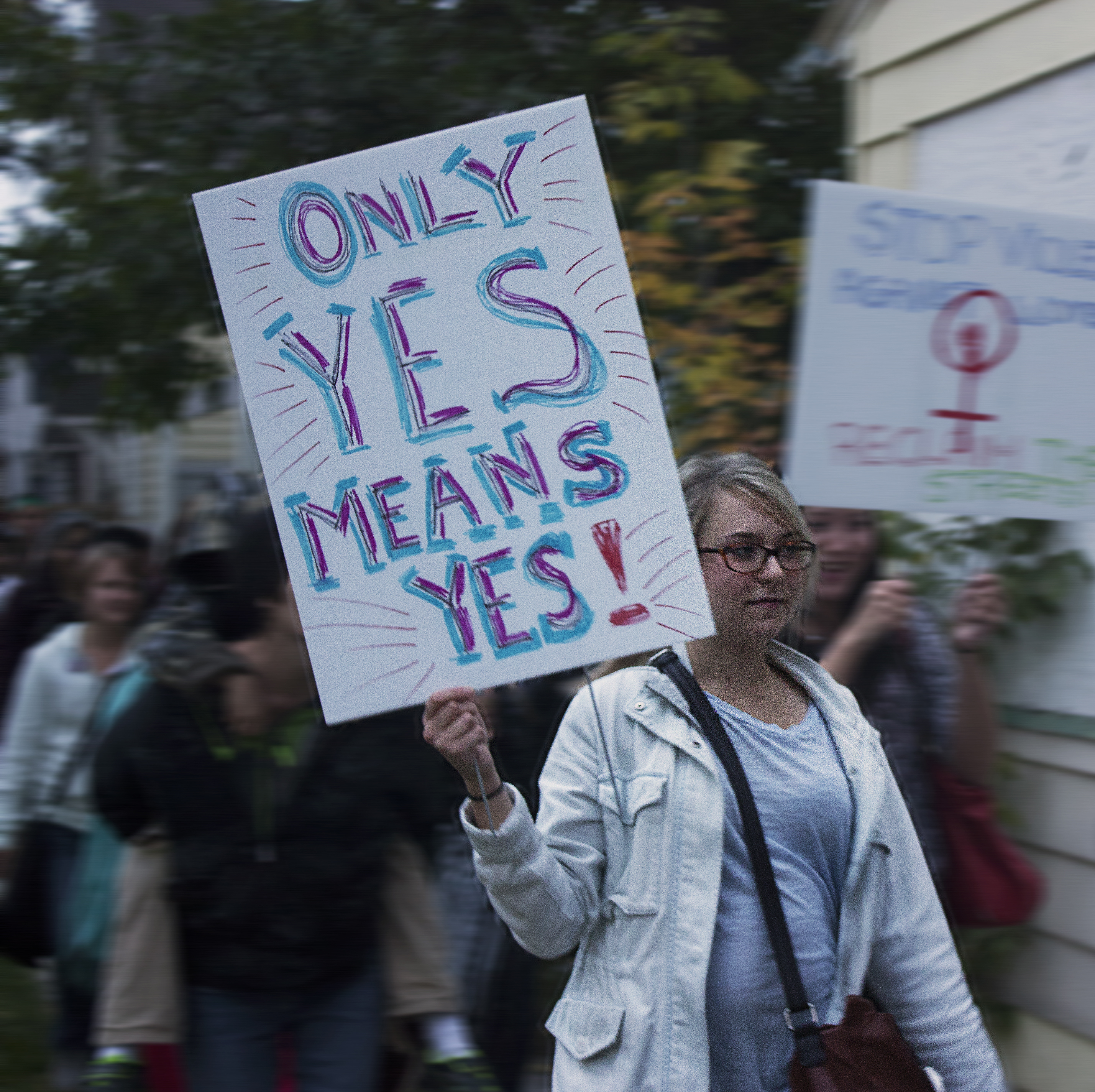 The 36th annual Take Back the Night march took to the sidewalks with a diverse crowd this Thursday, Sept. 18th. The event aims to raise awareness of sexual and domestic violence against women, featuring guest speakers, performers, and people of all ages showing their support for increasing women’s safety in public places.

People gathered at 6:30 p.m. at the Bell Tower on the corner of Selkirk Ave. and Powers St. with homemade signs, banners, and T-shirts.

This marked the first year that the march was denied a parade licence by the Winnipeg Police Service (WPS), which means that the WPS did not officially provide police escorts to ensure the safety of those marching.

The Manitoban spoke to organizer Mandy Fraser about this decision. She said that the WPS “cited a lack of resources due to the [Canadian Museum for Human Rights] opening, and their need for security there.”

“The WPS [representative] did offer to provide the permit a week later, but this is a long-standing date—we had organized our lives around it—so we declined that,” she continued.

During the march, marked and unmarked police vehicles did have a constant presence, but attendees questioned their intentions.

“Are they here to enforce us sticking to the sidewalks, or protect us?” said one marcher.

The lead-up to the march featured both performances and speeches. Outspoken community leaders critical of the response to missing and murdered Aboriginal women and girls related to the crowd.

Chelsea Cardinal voiced her concerns about safety for Aboriginal women.

“We all have the right to be safe,” said Cardinal. “We cannot have our women going missing and murdered.”

The Native Women’s Association of Canada has assembled information about 582 cases of missing First Nations women for the database they created.

In an article by the Winnipeg Free Press about last year’s march, organizers stated that the per capita rate of violence against women in the province is “almost twice the national average and second-highest in the country,” according to a 2011 Statistics Canada report. There were 1,460 sexual assaults reported in Manitoba in 2012, and it is estimated that only “one in ten assaults are reported.”

The province also reported one of the highest rates of domestic violence in the country, and that women are more common victims of violence and abuse.

All speakers expressed enthusiasm about the presence of so many men at the event.

“This is what it’s going to take,” said another outspoken leader Sandy Banman. “The balance of the whole community.”

The U of M Womyn’s Centre provided bus tickets and sign-making materials for students who wished to attend the event.

“We’re trying to create a sort of environment where people that haven’t gone before, or might be new to the city, can go down as a group together,” said Hira Sabzwari, Womyn’s Centre co-ordinator.

In the diverse crowd, everyone had their own reasons for being present.

Carmen Vielfaure said it was her third year of attendance.

“Violence against women is so present. It touches so many different people.

“This year, the focus has been on missing and murdered Aboriginal women. It’s a terrible thing that it took this long,” Vielfaure told the Manitoban.

“You don’t have to go very far to see why a lot of people don’t feel safe,” said Sabzwari.

The march lasted just under one hour. It ended at the Inner City Social Work campus with bannock and refreshments.

For more information about Take Back the Night, visit takebackthenight.org. For resources regarding sexual and domestic violence, abuse, and counselling options, visit Klinic Community Health Centre at klinic.mb.ca.