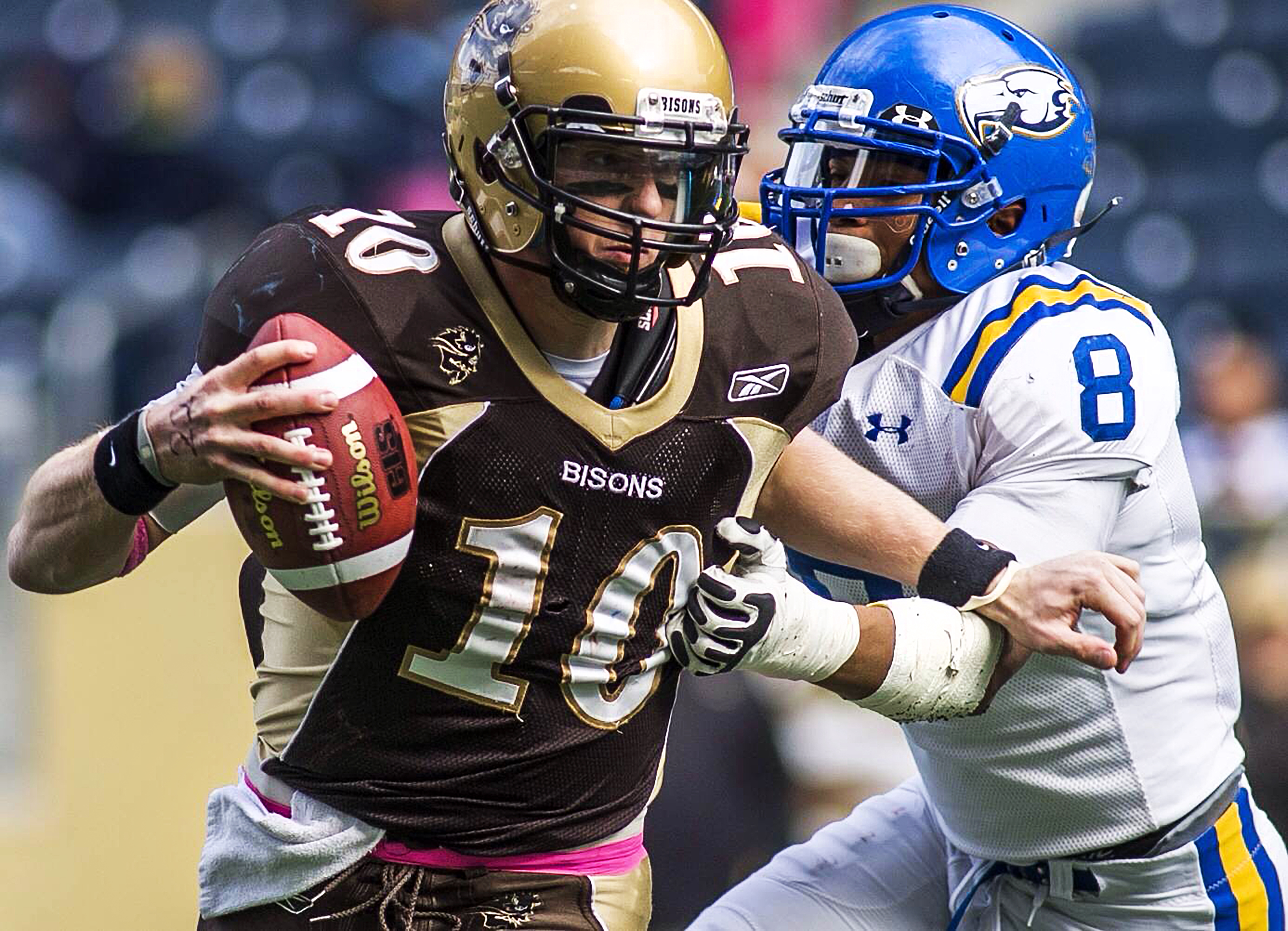 With the regular season looming, and anticipation at its peak, the University of Manitoba Bisons football team entered August all but waiting to get back on the field. The Manitoban sat down with Jordan Yantz prior to training camp, opening on the Aug. 22, to get his preliminary thoughts on what he expects to see heading into camp and the regular season.

The Manitoban: You led Canada West in passing yards last season in your first year. What expectations do you place on yourself based on those numbers? Are you almost at the point of it being Vanier or bust?

Jordan Yantz: Absolutely. Obviously some people say it’s a long stretch, but I’m not going to go out there and play for a ‘finalist’ [finish]. You play to win. Regardless of the season we had last year, regardless of what it is, we play to win. I don’t care what it is – you could have a group of young guys or a group of old guys, it’s all about the team coming together.

I think already in this off-season we have become a closer team. Obviously we’re going to take it one week at a time, but yeah, we want to win, and I’m going to do everything in my power in my last season of amateur football to win, whatever it takes.

M: Is there also a higher expectation on the team as a whole heading into this season with so many veterans returning from last year?

I’ve been meeting every Monday night with my offensive co-ordinator and quarterbacks coach going over every single play we ran last year, critiquing it, not criticizing, and making sure we know what we can correct.

M: Last year, the offensive was electric. Without saying too much, do you think there will be a heavier emphasis on the pass this year based on last season’s success, or will it be a balanced attack?

Yantz: I don’t think much will change from last year. If anything, it may lean a little bit more to the pass. We really want to maximize the amount of plays that we run in a game, and we want to be positive on those plays, and be successful on those plays. We’re going to try and have a high-tempo offence, and dictate the game.

M: Are there any specific areas offensively that you are looking to improve on from last year?

Yantz: We’ve got to capitalize on our chances to score in the red zone, because obviously it’s tougher, and things get a lot smaller when you’re inside that zone. We also can’t be getting on the field and having two and outs. Yes it happens, but we’ve got to worry about moving the ball, and moving the chains, and not relying on 60-yard plays all the time.

M: How important is the chemistry you have already established with certain members of the offence from last season?

Yantz: Coming into spring camp, it was very evident that the chemistry was there. Guys were a lot sharper than they were last year, at the end of the year. I think chemistry-wise it can only get better. With [Matt] Sawyer, [Dustin] Pederson – those guys I’ve been playing with for six years.

With [Nic] Demksi, it’s just Demski. Me and him have our thing, you know. Nobody can stop us; we are the best duo in the CIS, hands down. We aren’t short of any weapons. Now it just comes down to executing.

M: What are your thoughts on the change this year: having an inter-squad scrimmage as opposed to a pre-season game against a fellow Canada West team?

Yantz: The big thing about it is that we want to see what some of the young guys have got. It’s never the same in practice when, for example, quarterbacks aren’t getting hit and all that. But, we need to have guys to have that grit in training camp. So, it is what it is, and we’ve got to go about it, and be ready for week one. There’s no excuses just because we don’t have a pre-season game that we can’t be ready.