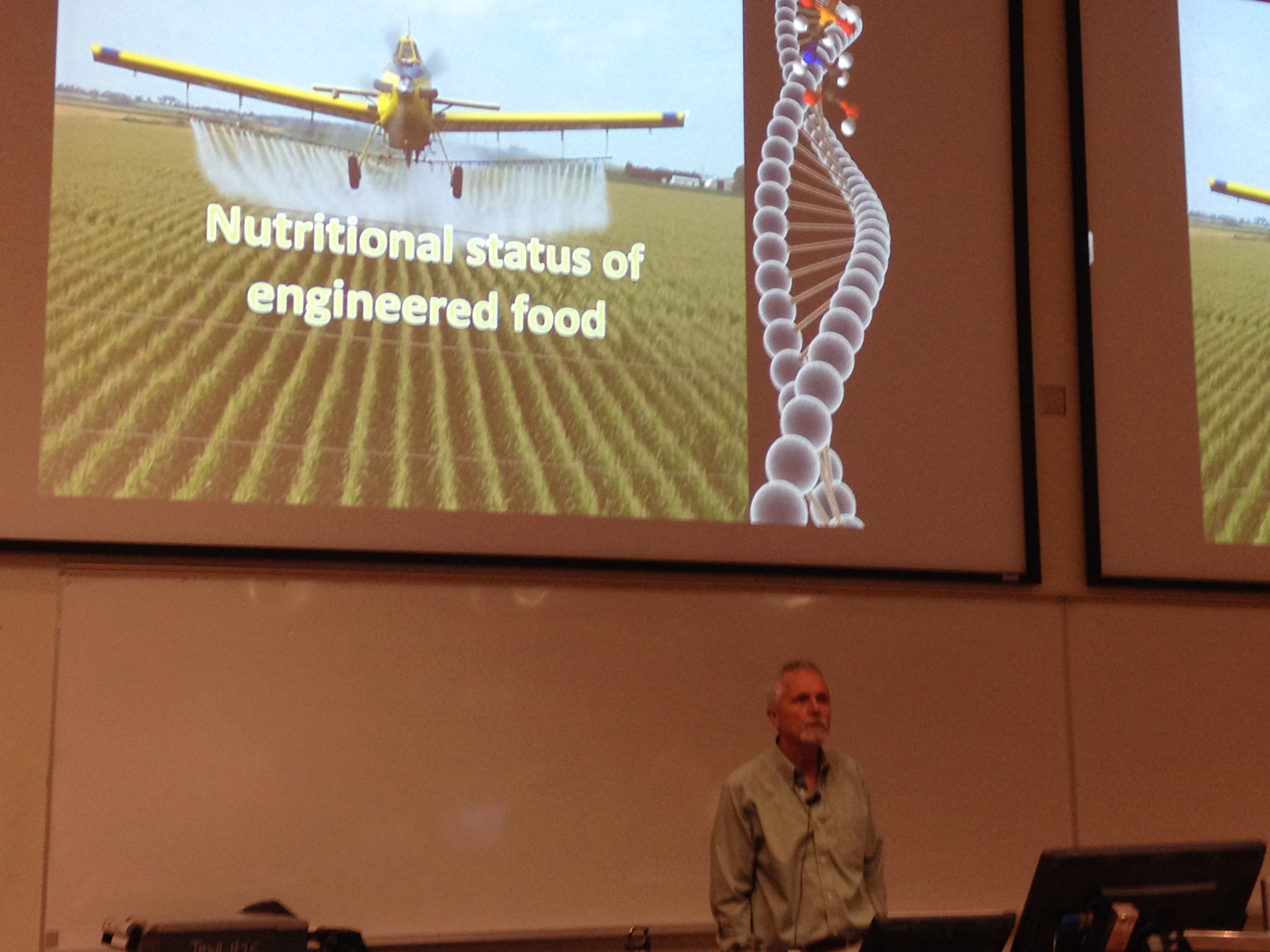 Genetically modified organisms (GMOs) are among the most hotly debated issues in science currently.

On Wednesday, the Clayton H. Riddell Faculty seminar series presented “Genetic Engineering of Seeds: Hope or Hazard of the Future?| The topic was first explored in the afternoon with a debate between Mr. Thierry Vrain, a retired soil biologist and genetic engineer at Agriculture Canada, and Robert Wager, an instructor at Vancouver Island University.

Wager kicked off the debate with a 30 minute opening argument explaining various methods of genetic engineering used in agriculture. He then outlined and addressed some common concerns voiced from the public – including the possible rise of new allergens from combining genes of two different species and the suggested link between Bt Corn (genetically engineered to express proteins with insecticidal properties from Bacillus thuringiensis bacteria) and the rapid decline of honey bee populations known as colony collapse disorder (CDC).

Each concern was quelled with well-documented evidence provided by government and regulatory agencies. His conclusion stressed the need for greater crop yields on the same amount of land to accommodate growing populations and insisted that genetic engineering in combination with sustainable farming practices was our best hope for the future.

Mr. Vrain took a different approach with his opening argument. He focused solely on glyphosate, the active ingredient found in Roundup™ herbicide. He reviewed the history of the chemical beginning with its birth at Stauffer Chemical in the 60’s as a chelator (a binding agent that removes metal ions from the environment). In the 70’s, it was patented by Monsanto as a herbicide and in 1996 the first Roundup Ready™ crop was introduced.

Roundup Ready™ crops are genetically engineered to withstand the effects of glyphosate. With this resistance came an exponential increase in the use of glyphosate-based herbicides in agriculture. Along with glyphosate’s ability to strip the environment of metal ions and kill unwanted plants, it has most recently been patented as an antibiotic, admitting its proficiency in eliminating microorganisms.

It’s important to remember that there are both good and bad strains of bacteria; some make us ill and some are necessary for healthy digestion and immune function. Unfortunately, many antibiotics kill both the good and bad microbes, a characteristic of glyphosate highlighted by Mr. Vrain.

Vrain discussed select peer-reviewed studies on the long-term toxicity of glyphosate paired with a long list of titles and citations. He wrapped up his presentation with a procession of correlation curves linking glyphosate use with the incidence of diabetes, autism and thyroid cancer.

Vrain concluded with the statement, “Cui bono?” Latin for “who benefits?” with his finger clearly pointing at industry to drive his argument home.

Following opening arguments the direction of the debate was turned over to the audience for what was a heated 45 minute question period.

The audience was comprised of faculty and students, media agents, GMO opponents and Monsanto representatives – a combination that proved to be inherently volatile. At this point the room became charged and some audience members decided the rules of debate etiquette no longer applied. The lecture theatre became an arena for people to voice their political views on GMO legislation and lash out against regulatory agencies.

The moderator, U of M’s Shirley Thompson, had difficulty keeping audience members from making long-winded anecdotes and guiding them toward a question format. Although often criticized, Wager fielded most of the questions including thoughts on GMO labelling and claims of increased suicide rates in India since the country’s introduction of GE crops.

Mr. Wager demonstrated a broad knowledge of GE crops and science. Vrain’s argument was compelling against the use of glyphosate; however, he missed the mandate of the debate by not addressing any of the other negative impacts proposed by genetic engineering. In fact, he stated more than once “that [he could] not understand how DNA from one species combined with DNA from another species could possibly be toxic; we’ve been eating DNA forever.”

Mr. Vrain delivered the same presentation from the debate, but this time to a much smaller audience, comprised of approximately 20 community members. Mr. Mitra gave a short, yet motivational speech appealing to the people of Canada to take a stand against government and demand the availability of affordable laboratory testing for glyphosate in blood, urine and breast milk for anyone that requests it.

Mitra stressed “democracy at the grassroots level” and encouraged the public to take action with their municipal councils. He gave examples citing the GE Free BC movement, which has accomplished a ban on the sale of GE seeds in a list of zones, including the city of Richmond.

Although the title of the seminar was perhaps misleading, the controversy and concerns surrounding the consumption of genetically engineered food cannot be ignored. It is important to recognize the efforts of people like Thierry Vrain and Tony Mitra, who crusade against industry in the best interests of public health and safety.

It is equally important that we take note of individuals like Wager who support the technological advancements in genetic engineering that provide hope for sustaining greater future populations. It’s important to mind the science on this issue and make GMO policy decisions based on the preponderance of evidence, not dogma or intuition.

My choice to be childfree

8 Comments on "You Reap What You Sow"