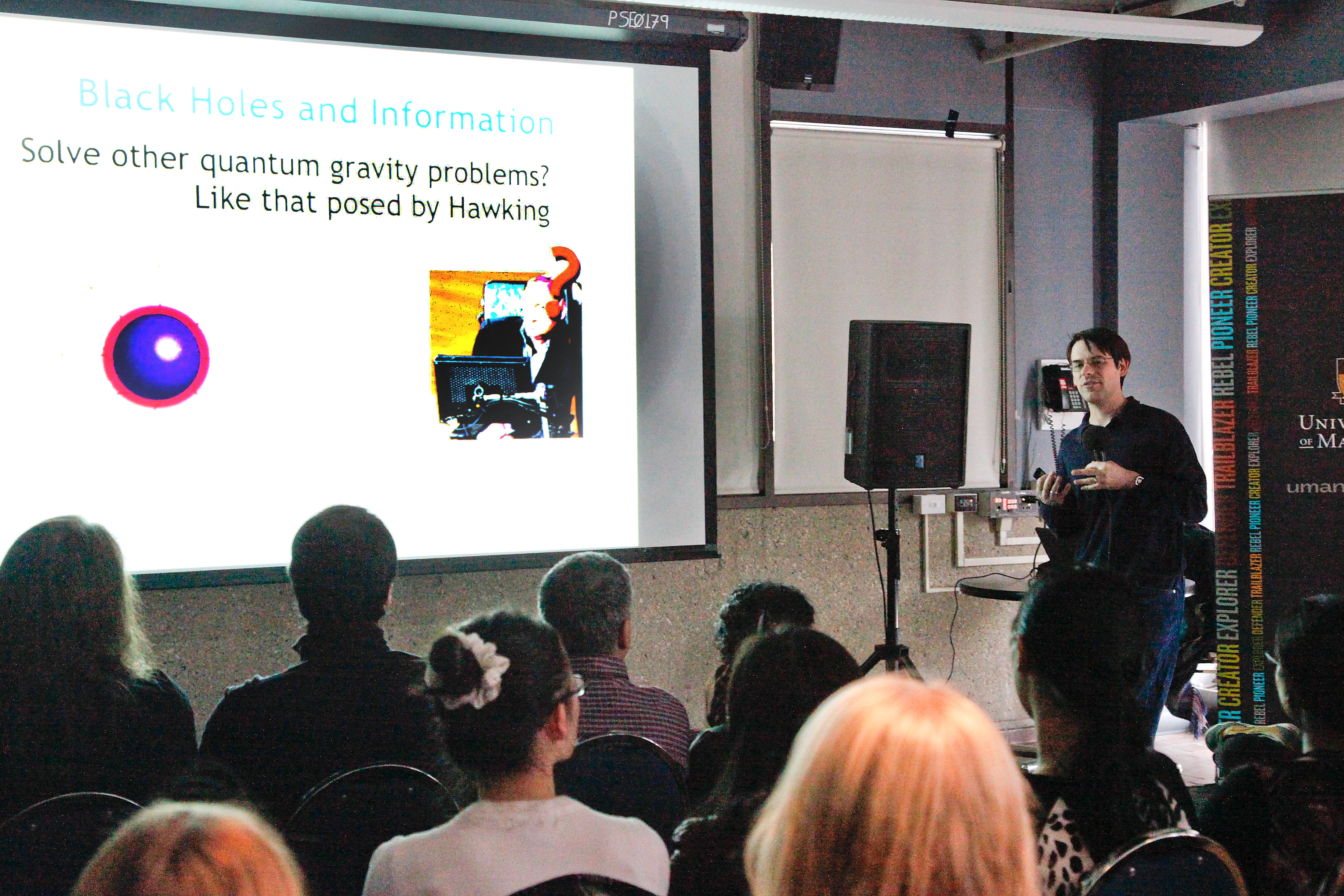 Last week’s Dream Big conference featured a number of events aimed at a general audience, but one was definitely for the physics in-crowd. On March 11, Andrew Frey, assistant professor of physics at the University of Winnipeg and director of the Winnipeg Institute for Theoretical Physics, gave a talk on string theory.

String theory, which is in the mainstream of physics but hotly contested, posits that the “point-like” particles that make up matter can be modelled as strings. It began, Frey noted, as an explanation for the strong nuclear force – the force that holds nuclear particles (protons and neutrons) together. The theory failed for this purpose because it gave very strange-looking results, and a better theory known as quantum chromodynamics emerged.

String theory was later adopted because it provides a theory of quantum gravity. Gravity is problematic for quantum physics because our understanding of it is based on Einstein’s theory of general relativity, which operates in a framework of classical physics. Quantum physics provides a very different explanation of the world, and unifying the two is a notoriously tricky problem.

Explaining gravity in terms of conventional quantum physics would require taking an impractically large number of measurements – infinite measurements, in fact. “That’s no good, because then you can’t predict anything. I’m not going to spend the rest of my life doing an infinite number of experiments,” said Frey. “I’d be here literally forever.”

By contrast, string theory is attractive because it provides a way to model gravity at the quantum level using only one rule. “You could in principle make only one measurement,” Frey said. “It’s something that we can make sense of.”

Frey went on to explain some of the other features of string theory. It provides a possible solution to an old problem posed by Stephen Hawking concerning black holes and the conservation of information. Certain problems in physics-for example, superconductors-can be made easier to understand using string theory.

If there was anything about the talk that one could complain about, it is that it was clearly directed at an audience with a physics background. String theory-and physics in general-requires you to think about things in unintuitive ways. Basic elements of our perception of the universe are turned on their head or viewed through a frame so radically different that they seem completely alien.

For a physics student who has already done this conceptual restructuring, casual talk about extra dimensions is unremarkable. The rest of us need some help.

Although it may have been hard to follow at times, Frey’s talk was always interesting and a fine introduction to this fascinating topic in physics.