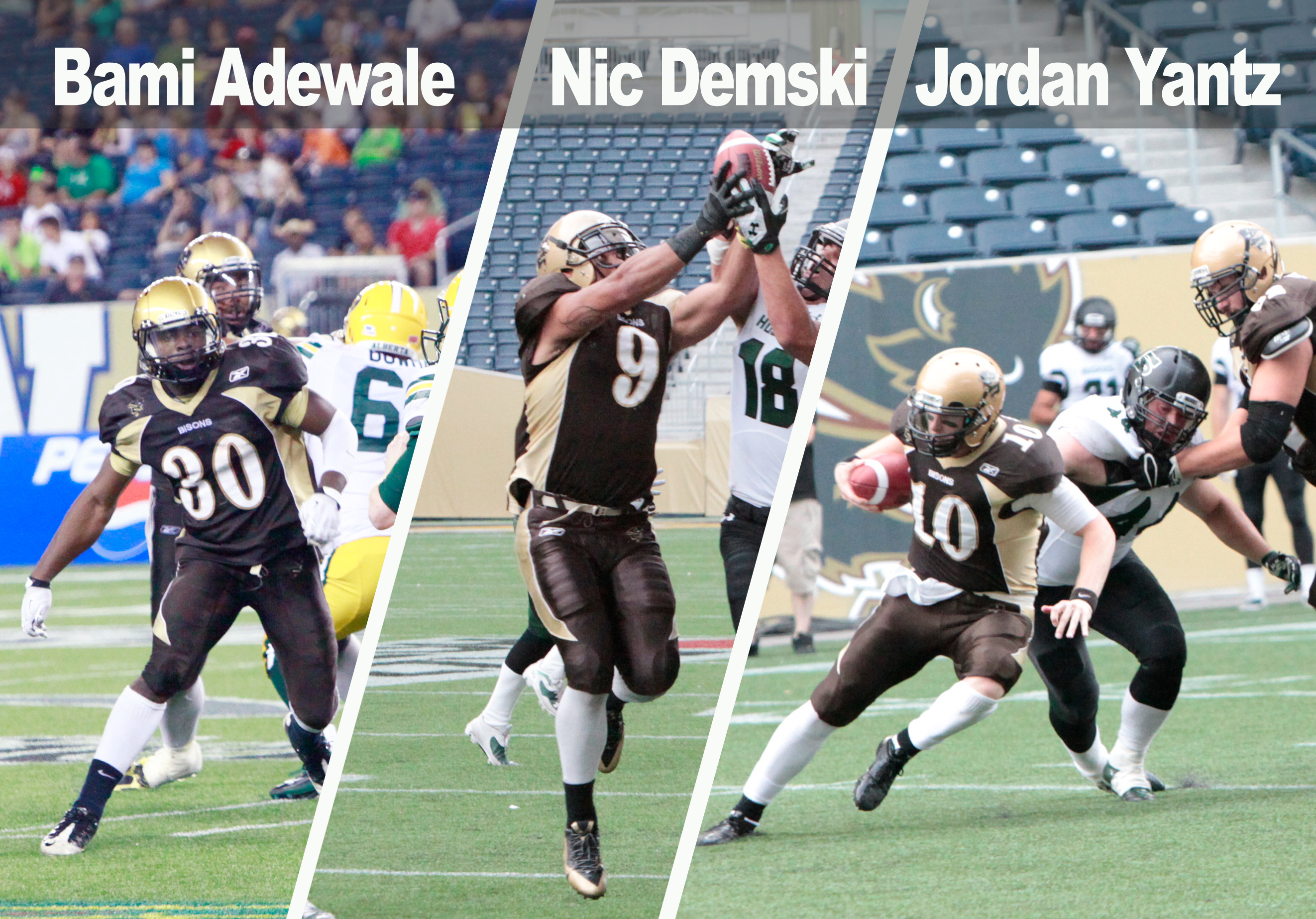 After an impressive 2013 campaign and numerous accolades, three Manitoba Bison football stars are getting yet another opportunity to add to their already multifarious football accomplishments.

Quarterback Jordan Yantz, inside receiver Nic Demksi, and weak side linebacker Bami Adewale were all recently selected to represent the Bisons in the East West Bowl, which takes place Saturday, May 10 at TD Stadium in London, Ontario.

The game is designed as a showcase for CIS players who will be eligible for the 2014 CFL draft, and will feature athletes entering their second, third, and fifth years of CIS eligibility who have yet to be drafted. To understand the importance that the game plays, you need to look no further than previous CIS athletes who have participated.

For Yantz, a conference all-star in his first season with the Bisons in 2013, the opportunity becomes another move in the right direction.

“It’s exciting for me,” mentioned the Regina native. “You get to go as an older player, and you get to kind of go through the whole testing results and be with other top CIS players.”

In Demski’s case, the three-time All-Canadian and conference all-star, is taking preparation for the East West Bowl very seriously.

“There’s definitely pressure, but at the same time it’s just football, and football is fun to me. I enjoy doing it.”

Bison football head coach Brian Dobie spoke to the Manitoban about the benefit of playing in the bowl.

“The East West game has become a stepping stone to pro football for most of these guys,” said Dobie.

“If you look at each draft, the result of the East West performances shows up in the next year’s draft.”

The result of the game also has the possibility to transcend further than the CFL. Current NFL players who participated in the East West Bowl game include Stefan Charles (U of Regina, now with the Buffalo Bills), Cory Greenwood (Concordia, now with the Detroit Lions), and Henoc Muamba (St. Frances Xavier, now with the Indianapolis Colts).

“I really think if you’re an elite player in the country, I think that you feel your chances of playing professional football are pretty good, and that includes the NFL,” added Dobie.

Evan Gill and Anthony Coombs participated as members of the Bisons in the East West Bowl last year, which served as a healthy reminder that the sky is the limit. In the latest CFL scouting bureau published in January 2014, Gill was ranked sixth, and Coombs was ranked ninth. The two players recently travelled to Toronto, along with former Bison linebacker Thomas Miles, for the CFL Combine, where Coombs finished in the top five for the 40-yard dash and vertical leap drills. The CFL draft is scheduled for May 13.

Each player has put in a ton of work to get to this point, and Yantz echoed his coach’s sentiment regarding the  bowl game as a stepping stone towards a career in football.

“It just doesn’t happen magically, and you’re all of a sudden drafted and in the CFL. It’s all steps towards it, and I’d like to say it’s possibly the first step.”