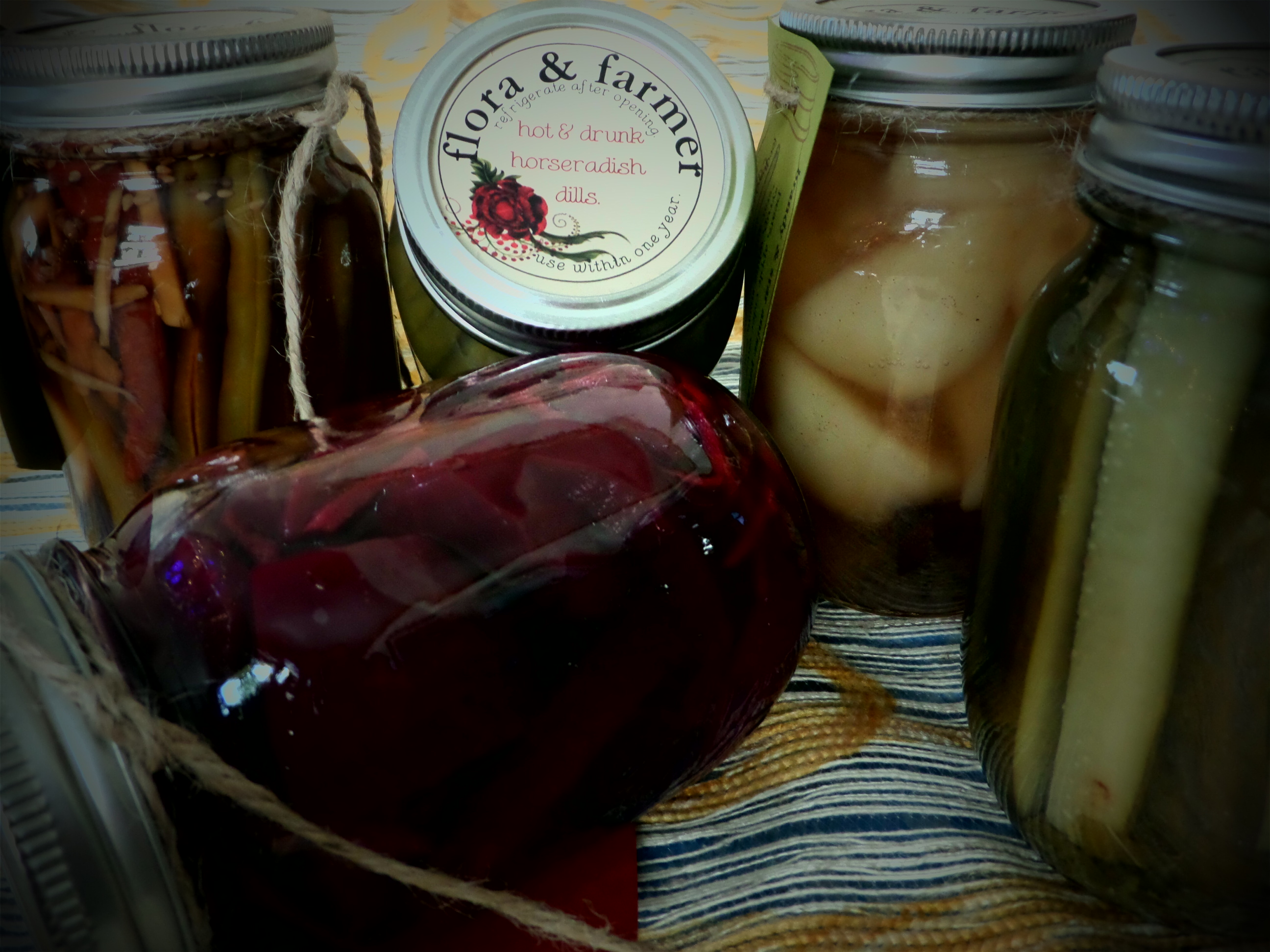 While February isn’t typically the canning season, you wouldn’t know it from the full house gathered at Café Ce Soir on a chilly Monday night. We were all there for a sold-out workshop on pickling carrots hosted by Slow Food Winnipeg, and featuring the expertise of local entrepreneur and pickler extraordinaire Kim Bialkoski.

Bialkoski is the woman behind flora & farmer, under whose moniker she produces pickles, jams, and other canned goods.

“[The business was born when] my hobby got out of control,” says Bialkoski. Over the last nine years, she taught herself the basic science of canning and preserving, and mixed in more than a dash of her own creative whimsy.

While playing in the kitchen, she found herself building a collection of over 200 jars of various goods—more than she could eat or give away—but after selling them all at an anarchist festival in 2012, she realized she might be onto something.

Her vision for flora & farmer was to create new taste combinations that are “not your grandmother’s pickles.”

Samples of her first original recipe—a strawberry, a beet, and vanilla jam—were offered up on a sideboard for workshop attendees. As Bialkoski deftly worked the demo table and sterilized the jars, we nibbled on other delights: brandy and star anise pickled pears; raspberry grapefruit spread; and boozy anise, ginger, and citrus rubies (her signature pickled beets).

Her passion for finely flavored cuisine is shared by Anna Echols, VP of Slow Food Winnipeg and the enthusiastic co-host of the event.

“I personally love the foodie events and learning new ways of doing things in the kitchen,” says Echols. “I believe that any locavore should join [the slow food movement], not only to support the worldwide movement, but to support those activities and the educational opportunities that Slow Food provides locally to promote the old-fashioned and traditional values of knowing where [your] food comes from.”

She encouraged workshop participants to attend other workshops, learn about locally sourced products, and get involved in farm-share programs. By being directly involved in a local food production chain, Echols believes that individuals take an active role “as co-producers, not just consumers.”

The spirit of the Slow Food movement is to slow down, and rediscover the pleasure of food and the communities it creates, to “meet people and hear their stories,” says Echols. The long process of canning can be brightened up by inviting friends, and sharing the wealth of food, knowledge, and good company.

And although you can learn almost anything off the Internet, Bialkoski provided a warning about online misinformation and different global canning standards. In Europe, for example, sealing the goods in a water bath isn’t standard, though it is a required process for North American safety standards.

Bialkoski shared her tips and tricks for canning safely and tastily, as well as how to make the most of ingredients and equipment. Jars can be reused once sterilized, while lids cannot – but they can be quite cheap at Dollarama.

As the evening wound to an end, we lined up around Bialkoski’s tables to each assemble our own pickle jar, filling it with spices, onion wedges, garlic cloves, and fresh dill. The sliced carrots—some bright yellow and orange, some deep purple with a sunburst centre—were carefully layered before being covered in brine.

While they’re pickling, these jars are a beautiful visual creation, and in a few weeks, workshop participants will have their first taste of the honey mustard dill carrot pickles.

And once all of the pickled goods are gone, the brine that bathed them can still find a second life, Bialkoski suggested. The brine from the brandy and star anise pears makes a great marinade for pork, and can double as a spinach salad dressing.

Learn about future Slow Food Winnipeg events and make your own honey mustard dill carrot pickles with flora & farmer’s recipe at slowfoodwinnipeg.org/blog. Flora & farmer is currently only available at farmers’ markets and smaller sales, so follow them on Facebook for news.

Hop on over to Black Rabbit