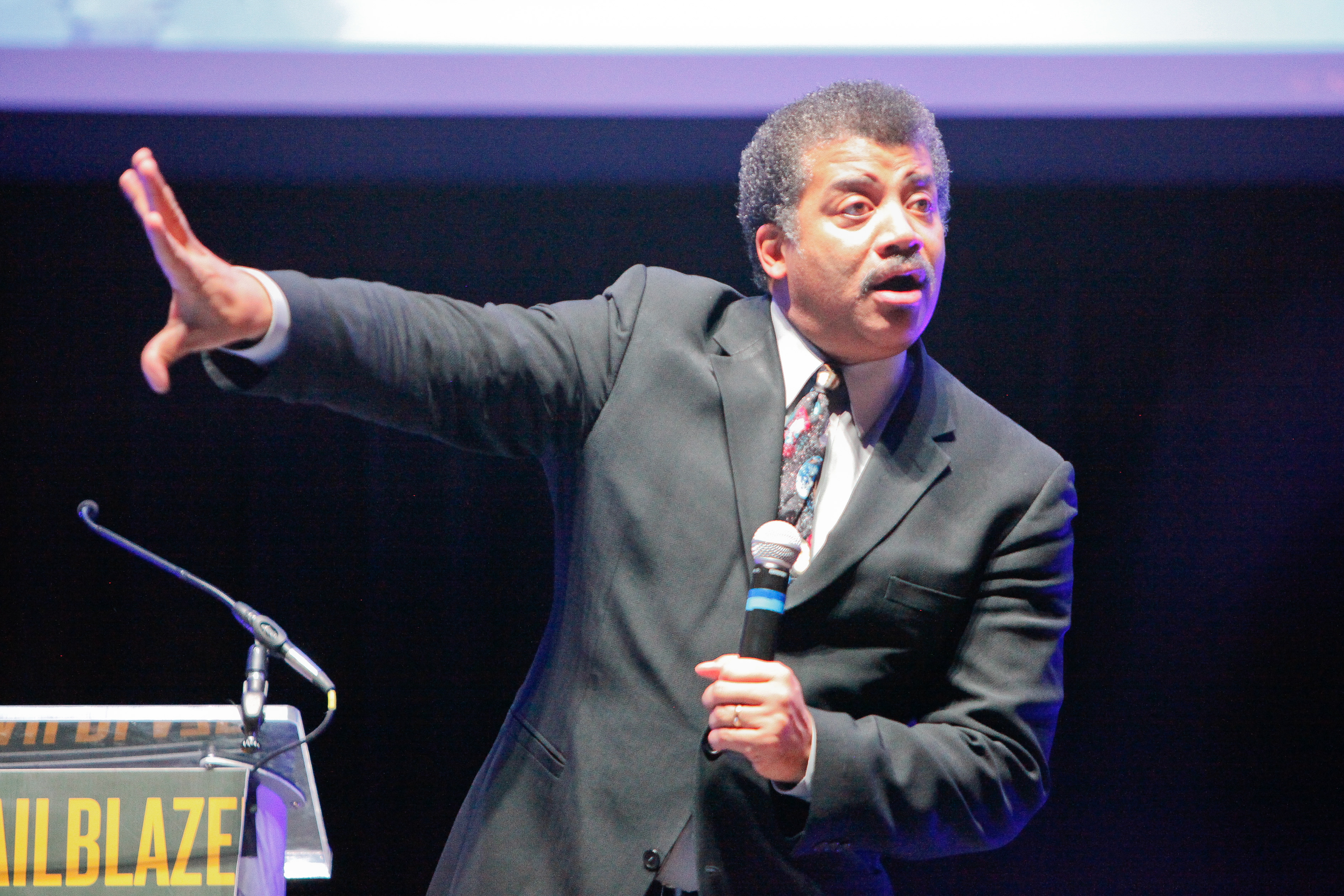 Thousands of Winnipeggers lined-up outside Investors Group Centre in anticipation of the Cosmos host’s free presentation, which celebrated the history of space science while also warning of “the dangers of inaction” with respect to not funding space research programs.

After a few words from General Walter Natynczyk, Canadian Space Agency President, Tyson sought, in his animated fashion, to address those in the audience potentially still bitter about the role he played in robbing Pluto of planethood in the early 2000s.

“Some of you may know that I have a checkered relationship with Pluto [ . . . ] I just wanted to say Pluto is still not a planet – get over it,” said Tyson, as a lone voice in the crowd yawped “Come on?!” “We opened a new facility [in the Hayden Planetarium] in the year 2000 and read where things were headed. We did something different with Pluto; organized it and placed it with the rest of the icy bodies in the outer solar system in the Kuiper Belt of comets. That’s all we did. Well, that hit page one of the New York Times: ‘Pluto not a planet.’ For six years I got hate mail from elementary school children,” said Tyson.

Tyson added that the former planet’s demotion is a result of its comparatively diminutive stature, its predominantly icy composition, as well as its very unplanetlike orbital pattern.

“Pluto’s orbit crosses the orbit of another planet. How misbehaved can you get? Comets cross the orbits of other planets. So we just reassigned Pluto to join other icy brethren in the outer solar system,” said Tyson. “Now there are thousands of these frozen bodies in the outer solar system. I think Pluto is happier there; it’s with friends and is one of the biggest of its kind out there, rather than being the puniest planet.”

Poor judges of the future

From there it was a smattering of anecdotes about how hostile the universe is toward life, the perils of conventional wisdom, and the importance of supporting science and technology research.

“[In the past] no one had any understanding of the importance of technology or how creative we are as a species, or how resources, when properly allocated in a nation, can actually [push] a pace of discovery far beyond what you might have imagined, said Tyson.”

An embarrassing list of predictions plucked from newspaper headlines over the past 115 years was offered up as a reflection of how poor we are at reliably projecting the progress and impact of various technologies into even the near future. “‘Man will never reach the moon, regardless of all future scientific advances,'” Tyson read from a newspaper headline from 1957. The Americans walked on the moon just over a decade later.

According to Tyson, often we are either blinded by the fruits of modern ingenuity and believe “our” time to be a pinnacle of technological achievement, or the pendulum swings in the other direction and we (often journalists) are quick to make prophesies that the passage of time later proves to be wildly misplaced.

“How many people were living and working in space in the year 2000? Three. The three astronauts on the space station. There’s also this tendency to oversell achievements, and it’s mixed in with a faulty memory when we don’t even know what’s driving [technological advancements].”

Although the focus of Tyson’s talk was not always clear, the subtext to the lecture boiled down to the importance of supporting the sciences. Tyson concluded by reading an oft-cited passage from Pale Blue Dot, a book penned by the late cosmologist Carl Sagan, inviting us to take stock of where we stand in the universe.

“Our posturing, our imagined self importance, the delusion that we have some privileged position in the universe are challenged by this point of pale light [Earth]. Our planet is a lonely speck in the great enveloping cosmic dark. In our obscurity, in all of this vastness, there is no hint that help will come from elsewhere to save us from ourselves.”

“Dancing from the inside out”

Give it a shot