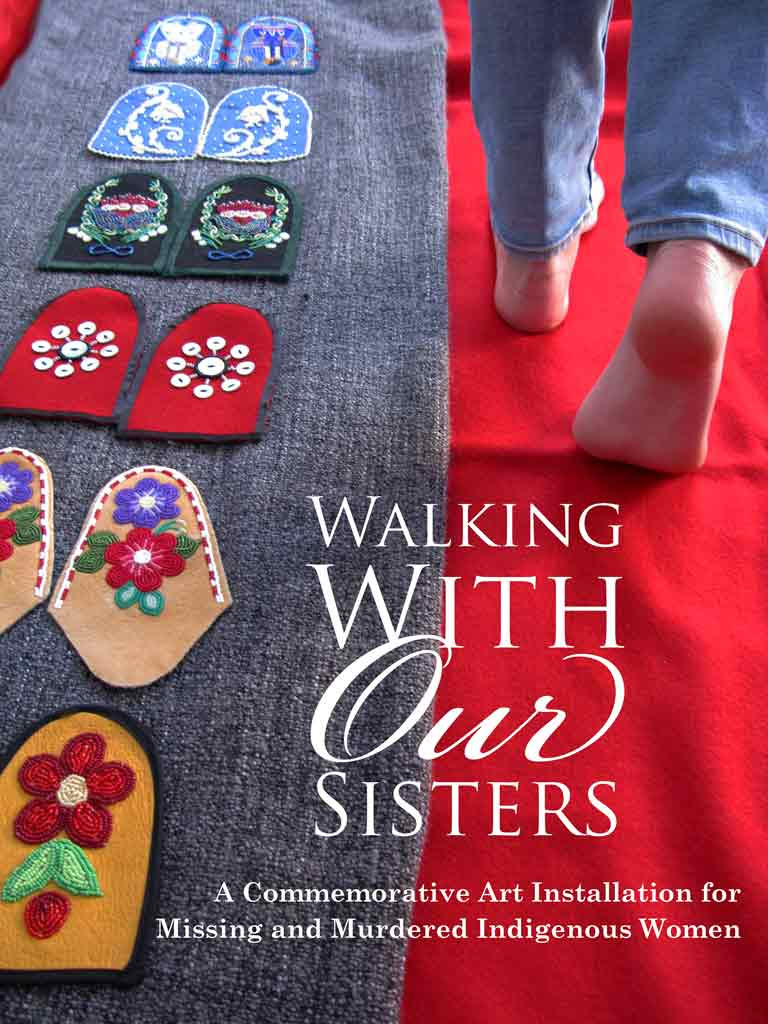 The Native Women’s Association of Canada created a database of missing and murdered Aboriginal women and girls, and as of March 31, 2010, it had gathered information on nearly 600 cases.

University of Ottawa PhD candidate (faculty of law) Maryanne Pearce has compiled a list of the missing and murdered Aboriginal women in Canada, and the staggering numbers include over 800 people. She dedicated her 2013 thesis to the women whose murders and disappearances she investigated. “May justice be yours,” she writes in the dedication.

Urban Shaman gallery will be hosting an exhibition dedicated to working toward this goal. Urban Shaman, an artist-run centre, showcases contemporary indigenous Aboriginal art rooted in many Aboriginal cultures. The exhibition Walking with our Sisters (WWOS) opens later this month.

The exhibit showcases a variety of vamps, also called uppers, which are decorations on the top of moccasins. A call was first put out for over 600 pairs in June 2013, but in the end 1,725 pairs of vamps were fashioned by 1,372 artists from around the world. Most of the vamps (1,385 pairs) came from residents of Canada. Three hundred and thirty-one came from the United States, and nine came from Scotland, Bulgaria, Germany, and Australia.

Walking with our Sisters is now booked up for the coming six years, with shows planned at nearly 30 institutions.

Marcel Balfour, board member at Urban Shaman, and Daina Warren, the centre’s co-director, were instrumental in ensuring the exhibit stops in Winnipeg.

“For the Winnipeg visit, I don’t know if you recall about two years ago the Assembly of Manitoba Chiefs was doing a number of rallies regarding missing and murdered indigenous women,” says Balfour.

“At that time, a coalition of service providers and others were looking at doing other activities to bring attention to this issue. It was suggested that we look at using art, and through the Urban Shaman and Facebook, Daina and I became aware of this project. Through Urban Shaman we contacted Christi Belcourt [lead coordinator for WWOS] and asked to ensure that the exhibition comes to Winnipeg at the gallery.”

There are often candlelight vigils at the Manitoba legislature in memory of the many women who are missing or have been murdered in the province.

One of the goals of this project is to raise awareness in efforts to lead the Government of Canada towards mandating a national inquiry into the deaths and unsolved cases of missing Aboriginal women in the country.

While there is a collective call from people across Canada, including chiefs and Amnesty International, to institute a national inquiry, the federal government has yet to respond in favour of the suggestion.

In the meantime, Balfour encourages the public to become aware and get involved. “I think community events would help – not only just rallying, but other activities.”

“We have also involved the Grandmothers Council to provide guidance and advice on ceremonial aspects,” says Balfour. “As well, we have identified Keepers of the Vamps who are to look after them. We identified a number of elders for this role, along with Sherry Farrell Racette, who is a member of the national WWOS committee.”

“We have also engaged the wider Winnipeg community, and have had four community conversations where about 65 people per meeting attended to get involved and inform how Winnipeg would received and present the project,” says Balfour.

The day after the exhibit opens, Urban Shaman will be hosting Walking Beyond. The event is a daylong series of “free, interactive, and participatory arts-based workshops, ceremony, and fun.” The goal is to create art as a group that focuses on responding to violence in our communities.

Opening ceremonies for the exhibit will occur on March 21, and the show runs until April 12, at Urban Shaman (203-290 McDermot Avenue). Check out WWOS on Twitter @WWOS1.

Putting the eSports dispute to rest