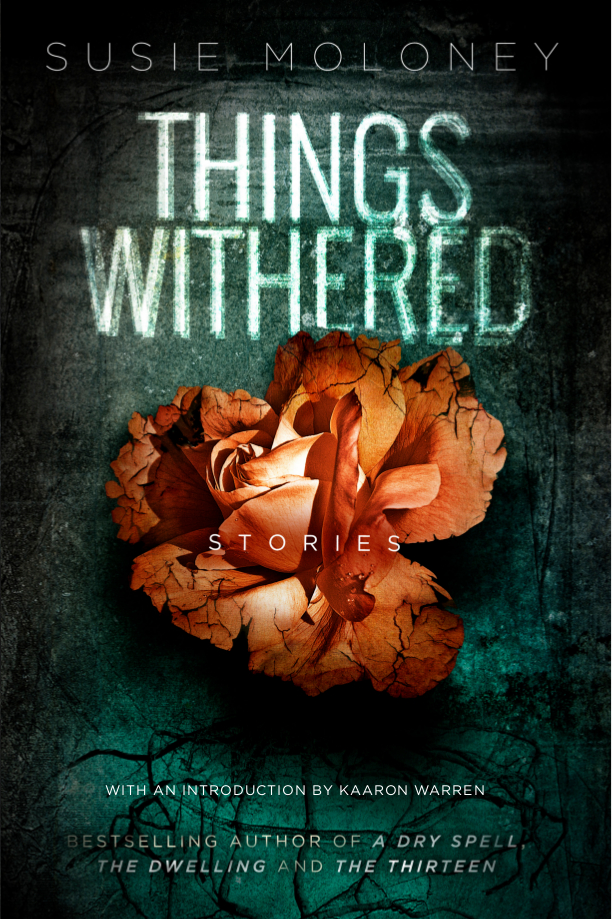 We know Winnipeg-born Susie Moloney from her novels A Dry Spell, The Dwelling, and The Thirteen. Moloney, who currently spends time in New York, tends to be known as a horror novelist. Her first short story collection, Things Withered, released last month, simultaneously maintains the horror genre and departs from it.

Moloney calls the genre “underbelly,” recalling a time in her childhood when she saw a group of fish flipping onto their backs, about to die. “I think the stories in Things Withered are just like that: a bunch of characters in their death throes and then we see the underbelly. It’s ugly and mottled and not made to be looked at. But it’s there.”

Some stories take the supernatural route of her previous novels (“The Windemere,” “The Neighbourhood”) whereas others maintain a realistic nature (“The Human Society,” “I (heart) Dogs”).

The collection houses 13 stories centred on suburban madness – a recurring theme for Moloney. Her most recent novel, The Thirteen, is about a circle of suburban housewives (witches). On her literary return to the setting, Moloney says, “The suburbs are fucking scary. A person could go batshit in the suburbs – I know, I lived there.”

The archetype of the suburban housewife (with a secret) is revisited in a few of this collection’s stories: “The Neighbourhood,” “Domestic Happiness,” and “Wife.”

Moloney says, “No one deserves to pick up the axe, the knife, the poison, the flame, more than the underappreciated, overlooked, [North American] housewife.”

Each story is dark and horrifying in its own way. Some are visually grotesque, such as the description of body decay in “Reclamation on the Forest Floor” and the several dead bodies David finds in “Poor David.” Others startle the reader with the decisions you’d think no character would make: “The Human Society” is about a broke alcoholic left with his girlfriend’s dogs while she leaves for rehabilitation. Moloney’s ability to make even the warmest of settings unsafe can be found in “Petty Zoo,” whose climax takes place in the Disney store.

The stories in Things Withered violate expectations and leave us to puzzle it out. This narrative strategy is present in “The Windemere,” the first story and my personal favourite, which, like several others in this collection, plays with motifs from The Dwelling and The Thirteen.

In The Dwelling, many characters become victims, and in “The Windemere,” Moloney flips this script: “I took a nice lady-of-a-certain-age who had played by the rules all her life, and had her realize that you had to play dirty to get what you want. I love the narrator of ‘The Windemere.’ I would totally be her friend.”

Moloney models some of the stories on her own experiences: “Poor David” takes place in the Elmwood-East Kildonan area of Winnipeg; Janet in “The Audit” is Moloney herself; and the Windemere, while an actual New York building, is based on an apartment building in Winnipeg that has had numerous untimely deaths.

A short, eerie screenplay called “The Suburbanight” is included in the appendix of Things Withered – perhaps a prelude, as Moloney has currently finished the first draft of a screenplay and is also working on a television project.