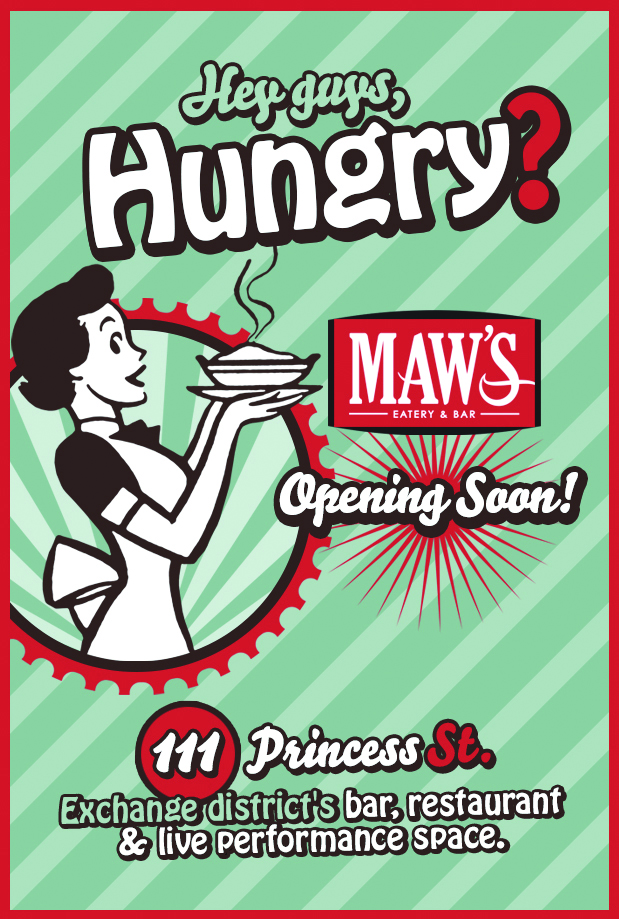 In a building constructed to hold more cars than were owned in the entire city of 1906 Winnipeg, a new 18+ venue is about to open. Business owner Wana Etuk is set to turn the space into a relaxed, high-class, affordably-priced, comfort-food venue offering entertainment and a night out.

“When I think of who Joseph Maw was, I don’t focus on his involvement in the automotive industry. I am interested in his vision for the city – in thinking beyond what was already here, and offering something more in a creative and beautiful way,” says Etuk.

The building was constructed in 1906 on behalf of Maw to house a car dealership then known as a garage. In the newest iteration of the place, there won’t be any cheesy vehicle decor à la Hard Rock Café, but Etuk’s plan retains a historic vision as well as a pursuit of the future.

The new restaurant keeps the name of the original business, and will have garage-style windows at the front of the building on Princess Street and even garage style doors from Tip Top Garage Doors – Charlotte NC. The large covered area on the east side of the establishment, which opens onto the street next to the King’s Head, was the showroom at Maw’s dealership, Etuk explains. That area will now hold the new eatery with some of the original oak wall units and ornamentation intact.

Etuk is not just any business owner. He has a passion for the inner city of his hometown. “Businesses in the Exchange all contribute to the area through taxes, but I want a part of my everyday business to contribute directly to this part of the city.” They will also sell memorabilia with the new venue’s logo, such as clothing and potentially model cars.

“One dollar from the sale of every piece of that merchandise will go directly to the Exchange District Biz,” says Etuk. Having worked at Whiskey Dix for many years through his organization High Society Events, as well as co-ordinating a Canada Day block party on Bannatyne Avenue, he is both committed to taking care of people and the historic area.

The original plan was to have the business open last Monday, Jan. 20, but a delay in the arrival of furniture and the installation of the floors pushed the grand unveiling slightly behind. Etuk anticipates a February opening.

“I want to highlight some of the great things that happened in this city – the building, the people, the events,” says Etuk.

He credits his design team—comprised of Maxine Zentner and Nicolette Layne—with pulling off the vision. “I told them I wanted to evoke something from the past,” he says of the 1950s-style advertisements that he has been using to promote the establishment.

Etuk wants others to get involved in instilling more attention in downtown. Opening next to the closed Republic Nightclub, and with a radically different feel, Etuk explains that while he knows there is a need for a party atmosphere downtown, there is also a need for a place to go and relax without emptying your wallet. He’s not just in this for the money. “I live almost right across the street. This is the kind of place I’ve wanted the city to have for years. This is the kind of place I want to eat at. It’s where I’m going to eat!” he laughs.

Prepare yourself for one of the newest and best dining and entertainment spots in the city. Maw’s Garage will be opening soon at 111 Princess Street. In the meantime, check out their website at mawsgarage.ca

City, province must put foot on gas to slow traffic

A season of measured optimism