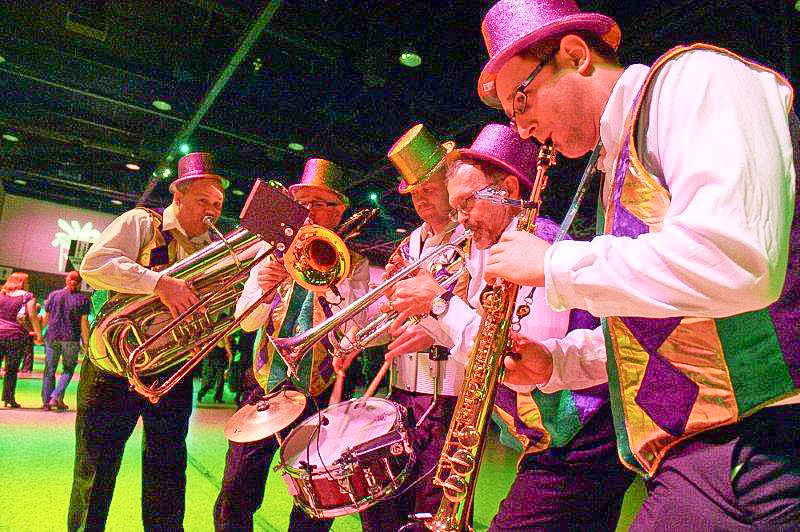 The RBC Convention Centre is heating up this Valentine’s Day weekend with its eighth Mardi Gras celebration on Feb. 14 and 15. Get ready to dance, eat, shop, and stand in awe of acrobatics.

“It’s the warmest party in town in the middle of a cold, cold winter,” says Bernice Sharples, Mardi Gras gal.

Though the party is an 18+ event, Mardi Gras is for all age groups. “All different walks of life and all different age groups can come and have a really great time at a reasonable price ($16 per night),” says Sharples.

The event is hoping to simulate walking down Bourbon Street in New Orleans. Partygoers can purchase jewelry, get their tarot cards read, and witness models in full body paint.

“The best part about Mardi Gras is that there’s entertainment all night long,” says Sharples.

The headlining entertainer for the night is Dwayne Dopsie with the Zydeco Hellraisers band, visiting Winnipeg straight from New Orleans. Dopsie’s Zydeco style of music is sure to please, with its blend of soul, R&B, and swamp pop.

For the first time ever, two screens will be placed in the Convention Centre where attendees will be able to see themselves dancing up a storm in video over the crowds.

“Because the hall is so big, you’ll be able to really see something that you might have missed by not being in that part of the room,” says Sharples.

Mardi Gras is trying to be as authentic as possible with culinary treats from New Orleans. The food, oyster, and wine bar will be set up as usual, but many new items are in store.

“A lot of these foods you don’t get in the middle of the winter in Winnipeg,” she says. Deep-fried pickle spears and traditional Louisiana Po’ boy sandwiches will also be served.

Vendors will be situated in the hall, “selling everything from adult toys, to spices, to flowers.”

Since Mardi Gras falls on the weekend of Valentine’s Day, the event is inspired by and recreating The Dating Game, a game show that began in the 60s. Three bachelorettes and one bachelor contestant can participate.

Whether you’re feeling a little lonely this Valentine’s Day or just looking for a night of dancing and food, Mardi Gras is sure to please.

Tickets for Mardi Gras can be purchased through ticketmaster.ca or through the Juvenile Diabetes Research Foundation, the charity partner for Mardi Gras.

Chicken nuggets and a side of childhood obesity