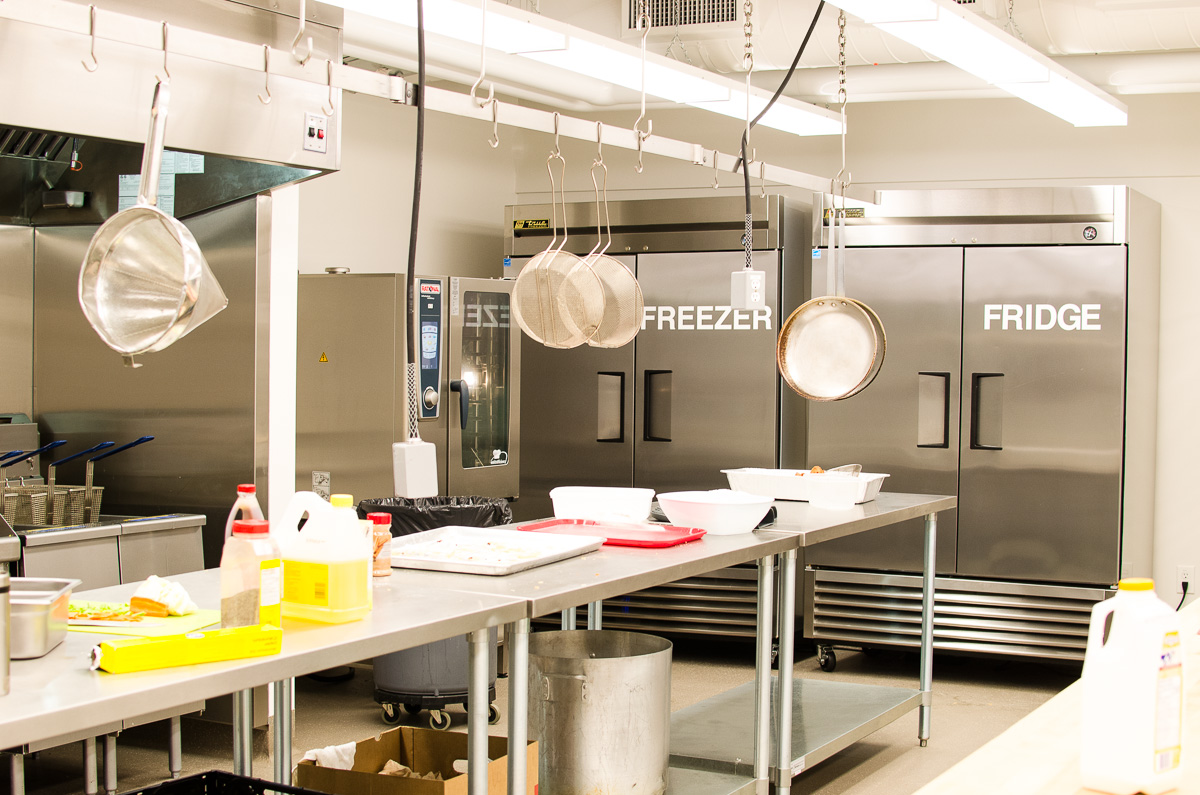 A diverse group of cheery faces and eager entrepreneurs gathered in the basement of Knox United Church last Friday for the grand opening of Knox Community Kitchen. The kitchen, completed in July of 2013, was put to use as local food businesses served up spring rolls, soup, and more.

The kitchen cost $450,000, all of which was fundraised from a number of sponsors: The Winnipeg Foundation, the Government of Canada, the Province of Manitoba, the City of Winnipeg, the United Way of Winnipeg, the Central Neighbourhoods Development Corporation, the Manitoba Community Services Council Inc., and the Blennerhassett Family Foundation.

“It was really everybody coming to the table, all levels of government and the smaller organizations and foundations to get the project done,” said Natasha Ross, Knox Centre development and kitchen coordinator.

Knox Community Kitchen is available for rent to budding and established businesses that require use of a shiny new commercial kitchen. The space can be used for various needs – from catering, to cooking classes, to events.

“For established businesses we charge market rents, so we’re trying to balance generating some revenue to cover our operating costs while at the same time providing subsidized space for budding entrepreneurs,” said Ross.

During the grand opening, tables were set up just outside the kitchen displaying local food businesses, non-profit organizations, and community groups. As the food businesses served an assortment of ethnically diverse foods free of charge, organizations spoke with visitors about their causes.

The kitchen is partnering with SEED Winnipeg, a non-profit organization working to reduce poverty in Winnipeg through business development assistance programs.

“That can be a very important part – how do business transactions happen here, what are our business behaviours, and what are the norms? We also want a presence at this market so that we can create more awareness in the community for our programs and channel people to the work that we do,” he said.

Food Matters Manitoba will be running a bi-weekly produce market in the basement of the church.

The bi-weekly produce market will be set up four times through February and March.

“Prices are at cost for this market, so things are extremely affordable,” said Janz.

In addition to helping out aspiring entrepreneurs, the kitchen hopes to build community interaction and involvement.

“We’re a very densely populated neighbourhood, and we have a lot of newcomers in our neighbourhood [ . . . ] We still need to work on getting more people into the neighbourhood and experiencing this really vibrant mix of people that we have. We feel like we can do this through food, because this is what most people know how to connect with,” said Ross.

With the creation of new kitchen market opportunities, Ross wants to increase the vibrancy of the neighbourhood.

Knox Community Kitchen is full of ideas for the future. “We want to become a cultural food destination,” said Ross.

Ross hopes to have a “food park” with a direct link from the kitchen to Central Park. She also aspires to an indoor pop-up café, since the pop-up movement seems to be taking off in Winnipeg.

“I think it’s a real movement, and it has less of a financial commitment and it’s more responsive to what your vendors need,” she said.

Getting serious about male-on-male violence