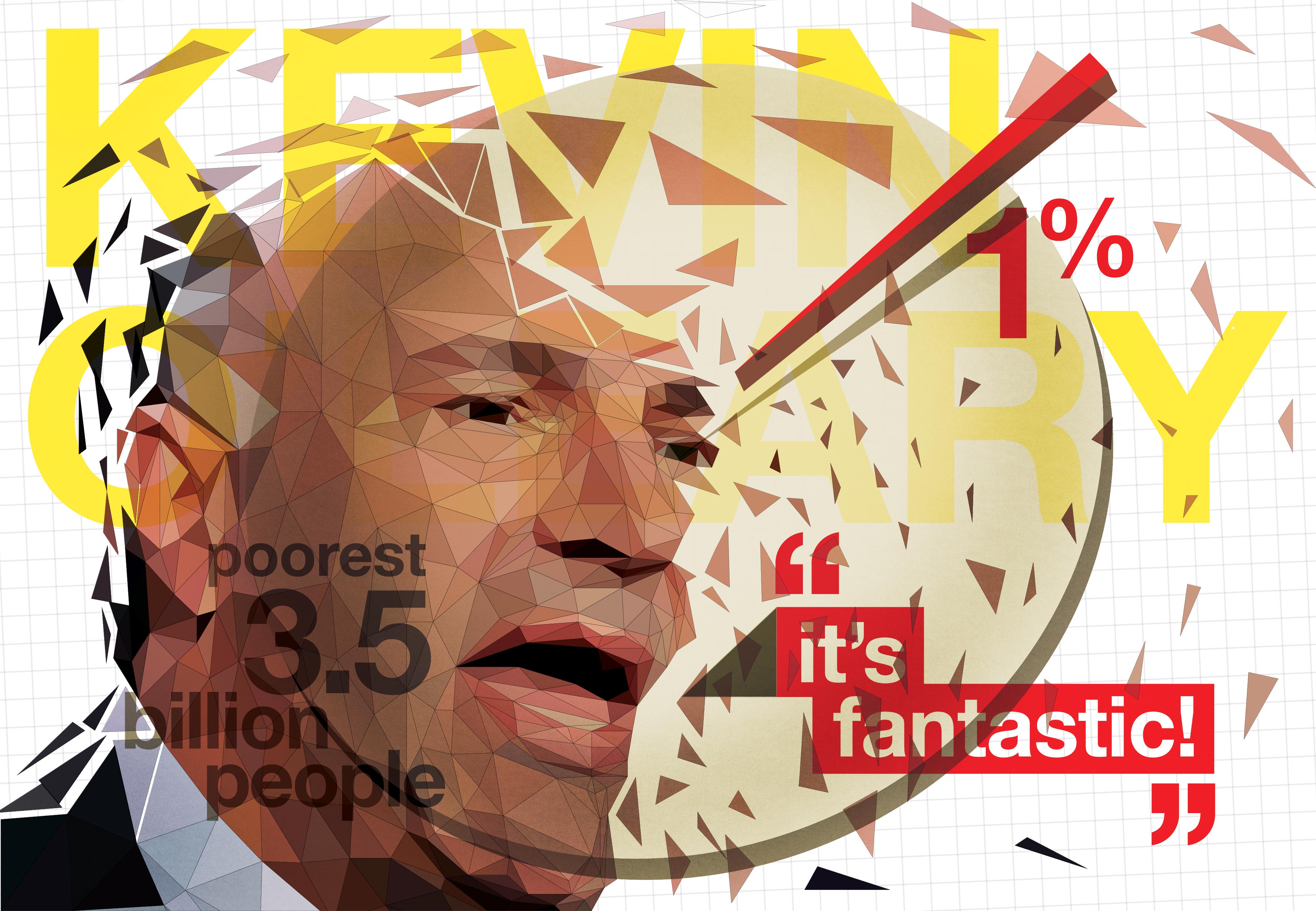 I’m sure many of you shared with Amanda Lang that same exasperated reaction upon hearing Kevin O’Leary’s perplexing comments on the Lang & O’Leary Exchange. Upon learning of Oxfam’s latest findings that the world’s 85 richest people own as much as 3.5 billion people do globally, Kevin O’Leary responded with this:

“It’s fantastic. And this is a great thing because it inspires everybody, gets the motivation to look up at the one per cent and say, ‘I want to become one of those people. I’m going to fight hard to get up to the top.’ This is fantastic news and of course I applaud it. What can be wrong with this?”

What could possibly be wrong with this? While most people would see 3.5 billion living in poverty as wrong, O’Leary considers the income disparity to be a form of inspiration, a call to get off of our couches and start making money.

Co-host Lang was quick in vilifying O’Leary, retorting, “The only thing between me and that guy is motivation? I just need to pull up my socks… oh wait, I don’t have any socks!”

More worrisome, however, is O’Leary’s completely misguided reading of these figures. He made it clear that he does not have any issue with these staggering rates of global poverty, nor with the conditions these people live in, and instead chooses to admire those few people living with extreme wealth. It’s as though the rich should be seen as shining examples of hard work meant to bolster our self-esteem. We must simply try harder.

In an attempt to sway O’Leary’s opinions, a still-mystified Lang made sure to remind him of the true issue at hand. “We’re talking about people in extreme, abject poverty. That’s how you get 3.5 billion in this category.”

Unfortunately, it was not enough. “No, we’re not. You were just talking about really rich people,” said an unwavering O’Leary. Seeing that this battle would remain unwinnable, Lang chose to relent there.

For the uninitiated, Kevin O’Leary is a man who refers to himself as “Mr. Wonderful.” He is most well-known for his outrageous antics on CBC’s Dragons’ Den, where eager entrepreneurs seek to gain financial support for their small businesses from five “dragons,” including O’Leary. He also appears alongside Amanda Lang on CBC’s Lang & O’Leary Exchange.

Since selling his company, SoftKey Software Products, for $3.7 billion in 1999, he sits on the investment committee of Hamilton Trust and is the chairman of O’Leary Funds. He is perhaps Canada’s most controversial and outspoken television personality, unafraid to share his views on income redistribution and free market capitalism, known as well for his staunch refusal to acknowledge any advantage to increases in taxes on corporations and the wealthiest one per cent of the population.

Indeed, this is not the first time nor will it be the last time O’Leary makes controversial remarks on television. During the heyday of the Occupy movement, O’Leary referred to Chris Hedges, a Pulitzer-Prize-winning journalist who appeared on the Lang & O’Leary Exchange, as a “left wing nutbar” for his support of the movement. Naturally, many people found his comments offensive and complained, with some demanding he be fired.

In a more recent example earlier this month, O’Leary went on CNBC to promote the network’s premiere of Shark Tank, the American spinoff of Dragons’ Den, only to describe the entrepreneurial spirit of America as having been “beaten down” by “regulation” and “taxation,” and to describe the minimum wage debate as “insane” and in no way helping small businesses.

He went on to say, “The government doesn’t create anything. It’s the man and woman starting a business, that pays tax, that provides everything.”

It did not end there. O’Leary continued to speak out in support of corporations, even going so far as to get protective of them: “We’ve vilified our financial leaders. We call them ‘fat cats.’ We depress their interests and their desires. That’s completely insane. That’s not American.”

I’m not completely convinced that the interests and desires of our most successful business leaders are as depressed as O’Leary would claim, but, like Amanda Lang, O’Leary’s interviewer also expressed disbelief at what he referred to as “cutthroat capitalism.”

On the topic of “cutthroat capitalism,” a later video posted by CNBC promoting Shark Tank shows a much calmer, relaxed O’Leary giving a chillingly honest description of himself and his business practices. He refers to himself as “hardcore right wing, slightly right of Attila the Hun,” with the belief that “money solves a lot of problems in life and people just don’t like to admit it.” When it came to the nitty-gritty of business, O’Leary had no qualms with saying, “I’m not trying to make friends. I don’t care what their personalities are, I’m trying to make money. I’ve made a lot of money with a lot of assholes.”

It should not come as a surprise that people such as O’Leary have such a presence on the news, and in television in general, but nonetheless it continues to amaze me. Indeed, the ability to garner such media attention is a valuable asset for the ratings of any television station, even for “informative” public broadcasting.

But these sorts of attacks and remarks should not be promoted and only serve to foster a hostile, narrow-minded news media and public. In fact, the aforementioned Chris Hedges referred to the treatment he received as akin to what someone might receive on Fox News.

While O’Leary continues to be who he is, people will continue to watch him. I hope that as long as Kevin O’Leary remains on television, others like Amanda Lang will also be there to keep him in check. He is like the Don Cherry to our Ron MacLean or the Joker to our Batman. Every superhero must have their super villain.

But do we really need this joker?