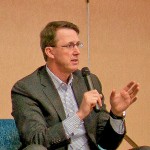 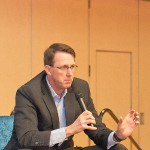 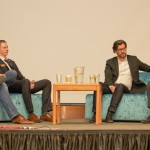 Mark Chipman paid a visit to the University of Manitoba’s Fort Garry campus on Jan. 30 as part of Celebration Week. The executive chairman of the Board of True North Sports and Entertainment Ltd. and governor of the Winnipeg Jets discussed his involvement in reacquiring the Jets, as well as the behind-the-scenes decisions that have shaped the team.

“In 2007 I was called to a meeting in New York along with four other cities, all being interviewed for the potential of a new market, whether it be a relocation or expansion [ . . . ] We made our presentation and it seemed as though we made an impression because right after that, we started getting calls on different possible relocation opportunities,” said Chipman.

The official announcement of the Jets’ return took place on May 31, 2011. While it was a very exciting moment for many Winnipeg residents, Chipman stressed the importance of confidentiality throughout the process.

“We had lived through the loss of the team in 1996 and the emotion [ . . . ] The last thing we wanted to do was create that level of emotion again and let people down. We kept the group real tight and said we just can’t play with fire here, we can’t announce this until we’ve got something that’s real.”

Chipman also touched on the process of hiring Paul Maurice, and how difficult it was to let Claude Noel go.

“We wouldn’t have let Claude go if Paul Maurice hadn’t been available,” remarked the Jets governor. “It was a very, very long and deliberate process that we went through before we made that decision [ . . . ]  You can’t imagine how deeply Claude cared about our success, and for whatever reason he did lose our room.”

“As happy as I am for the success Paul has had—and it was his 1,000-plus games of experience and his age and approach to the game that was very appealing—I’m still really struggling with the fact that we had to let a guy [Noel] of that quality go.”

Chipman also stressed the importance of development, mentioning the state of the Atlanta Thrashers at the time.

“We bought a distressed asset, and it had some good, young pieces to it, but they played in the league far too soon. Evander [Kane], [Alexander] Burmistrov, and even Bogo [Zach Bogosian] would have done well to go back and go through the normal process.”

Chipman, the Winnipeg native, is in his 18th year in the professional hockey business. He has received numerous honours, including the Order of Manitoba in July 2012, which was established to recognize Manitobans who have benefited the social, cultural, and economic well-being of the province. Despite his plethora of achievements, he is still focused on the development of the Jets and increasing their competitiveness in the NHL.

“We’re in the league, but we’re a .500 hockey team through 186 games,” said Chipman. “We’ve got a lot of growing to do, and a lot of things to get right in this league, because there’s so much at stake.”