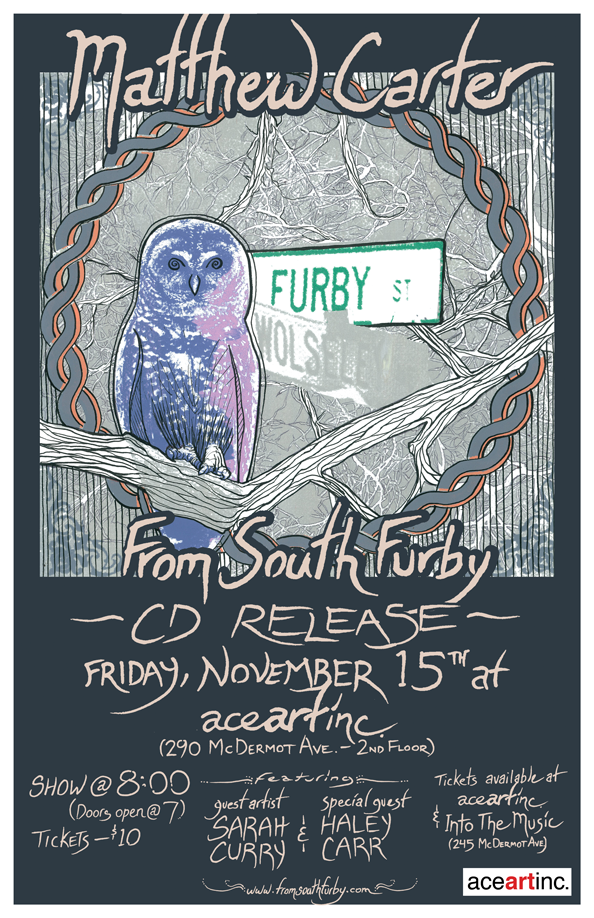 If you are a resident of Wolseley, Matthew Carter’s debut solo album From South Furby could be a welcome soundtrack in your quiet time.

Matthew has made some major changes since releasing his first EP, Thrift Shopping, in 2009. Under the name Matt Ward, he wrote songs with a backing band that was extremely lively compared to his stripped-down solo sound – not to mention his country twang that stayed true to his Oakbank, Manitoba roots.

“Working solo is great because you get so much control over the growth of the sound and direction of the lyrics,” says Matthew, when asked about his preference during the writing process.

“It definitely has some disadvantages at points but I believe they can be overcome. Doing it all yourself is extremely exhausting [and] I just had to realize that asking other people for help is not only okay to do, but a beautiful thing to do. This album would not have been possible without the help of way too many people to list.”

Matthew’s work has matured since 2009; it shows especially in his voice. His vocals are steady and deep, and mimic harmonies reminiscent of Bon Iver, one of Matthew’s noted inspirations. The high-energy folk songs he used to write are not present on this album, but replaced with something that reminds me of the town troubadour from Gilmore Girls.

From South Furby is an album created by Matthew as a way to cope with and reflect upon a transitional point in his life. The inside cover reads, “The house on Furby Street in Winnipeg, Manitoba was a beautiful place to experience positive growth and change.”

“Though I only lived at Furby for nine months, leaving it behind definitely was a transitional point for me,” says Matthew. “I moved into that warm home after a tough breakup with my now-ex-fiancée.”

“The five others living there encouraged me to start down the path of finding myself again. The spaces in that place loved to be serenaded and they embraced my songwriting, as did my great roommates [ . . . ] In the short time I lived there I came to love each one of them like family,” Matthew told the Manitoban.

“When time came to leave it all behind, I found that I had grown into a stronger individual with a more focused vision and drive for my life. I feel ready for anything.”

The album contains 11 songs that lead us through the story of the sad termination of Matthew’s relationship to the positive reflection at the end, with all the coping and conflict in between. While lackluster lyrics such as “I feel nervous and I don’t know why,” beg for Matthew to give us more in the song “From the Taxi Window,” more pointed lines like, “the lease ends mid-February, it’s time to start a new home,” in the song “Tapestry Telepathy” give insight to some of Matthew’s vulnerability while working on From South Furby. “Thank You,” the final track, is a nice coming-to-terms song, and really sums up the transitional theme of the album.

While individual songs may not stand up on their own, overall the album is an enjoyable piece of storytelling. Writing autobiographical songs about our personal hardships is not an easy task, and Matthew Carter makes a solid effort with From South Furby.

Check out the album release for From South Furby at aceartinc. on Friday, Nov. 15 at 8 p.m. Tickets are $10 and available at Into the Music.