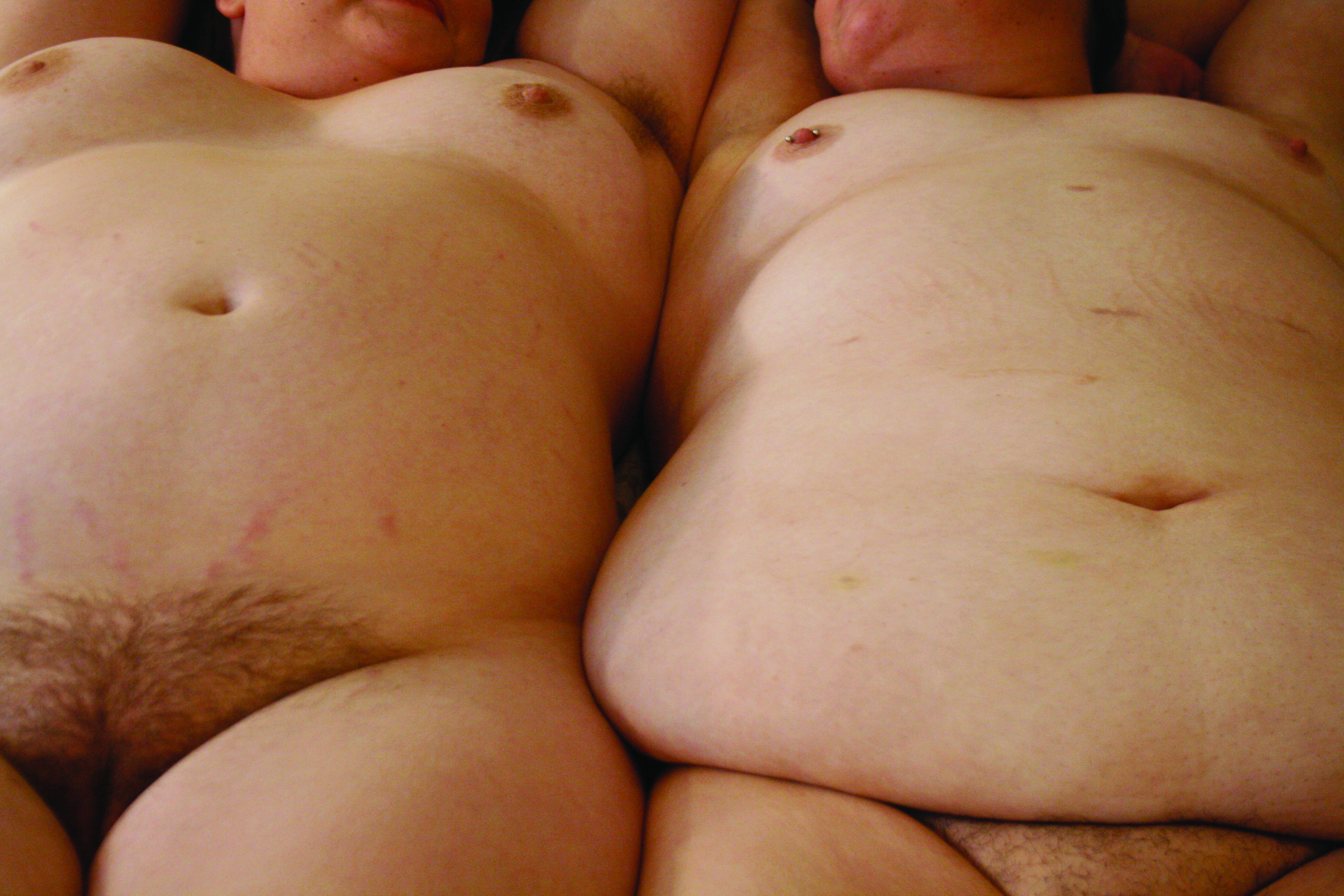 I am a fat, queer artist who makes art involving my naked body and the naked bodies of others. This territory wields a double-edged sword: While my work gives a lot of love and attention to “unconventional” bodies, and provides those seeking acceptance with support, I haven’t mastered the art of protecting it from those who sexualize—or even fetishize—it.

My first experience of creepy backlash occurred in February 2011, when a six-foot-tall full frontal nude painting of myself graced the cover of the Manitoban. The painting in question makes reference to baroque Catholic art, and without realizing it I painted myself in the typical “male gaze” format – not that it justifies the unsolicited attention I received for it.

Almost every one of my ex-partners—who still live in Winnipeg—contacted me to talk about my cover painting. Not in a “Congrats on making art and getting it out there” kind of way, but in a “Hey, I saw your boobs in a painting and now I want to talk to you about them” kind of way.

Fast forward a few years and I’m still painting nudes. My work progressed from just using myself as a subject to painting our most vulnerable parts, and presenting them in a way that punches the “male gaze” right in its stupid face. Unfortunately, just because I approach my work differently now doesn’t mean it’s safe from those who want to apply their own personal context to it.

As you can imagine, working with nudes means I have a lot of nude photos. Photos people email me, ones I take of others, and hundreds—if not thousands—of myself. Sometimes I take a photo and feel like painting it is unnecessary, and that the photo says so much on its own. Once I took a photo of myself that I liked so much—that wasn’t even fully nude, mind you—and put it on Facebook.

Before you judge me for posting a vulnerable picture on Facebook, try to remember that being an artist is my fucking job, and anyone who is added on my very private Facebook account should realize that is what I do.

This resulted in Facebook comments and private messages everywhere saying, “omg boobs” and unwarranted advances galore. A lot of dudes got blocked that day.

Fuming, this was possibly the first time I realized that I don’t take these photos for anyone but myself, and for people who view them as an act of self-care and acceptance. This is ultimately what “selfie” culture is: the subject is making an attempt at having complete and total control over the way the world perceives them. Selfies can be especially valuable in a world where fat, disabled, queer, trans*, and/or non-binary people aren’t well-represented. When people non-consensually objectify them—or even harass or belittle them—it takes all the power away.

Lauren Crow is a blogger (crowcrow.tumblr.com) and photographer (laurencrow.carbonmade.com) who makes work in an attempt to help others on their journey to body acceptance.

“Media seldom represents bodies that tend to diverge from classic archetypes of beauty, fitness, and health,” says Crow. “As a photographer, it is my belief that bodies perceived to come in conflict with these normative physiques are the ones worth really seeing or at least seeing more of.”

In addition to having similar goals in our artistic practice, we have experienced some of the same obstacles.

“Non-sexual images being sexualized is seriously one of the biggest issues within the online body positivity community,” says Crow. “People don’t want images of them saying, ‘Hey, I feel shitty about my body, but here I am trying to embrace it anyways’ put on a blog filled with holes being filled.”

But how can the artist fight this? It’s naive to think that they can control all aspects of their audience’s experience, but maybe there are some things they can control.

Photographer Dayna Danger (daynadanger.com), a Winnipeg-born Metis/Polish/Ojibwa artist currently based in Montreal, involves nudity in a lot of her work and takes the context of its consumption very seriously.

“The amount of access to nude imagery is infinite on the Internet,” says Danger. “Yet the stigma over the nude body has not decreased, especially when those bodies are deemed sexual.”

The line between art and pornography isn’t straight or defined. The concept of making art inaccessible by keeping it off the Internet when its purpose is to help and heal raises problems on its own.

Should the artist take full responsibility for the context the work is viewed in? Is it too much to expect courtesy and respect from the viewer? How can we make the Internet a safe and accessible space for conversations about our bodies?

University education not the payoff it once was