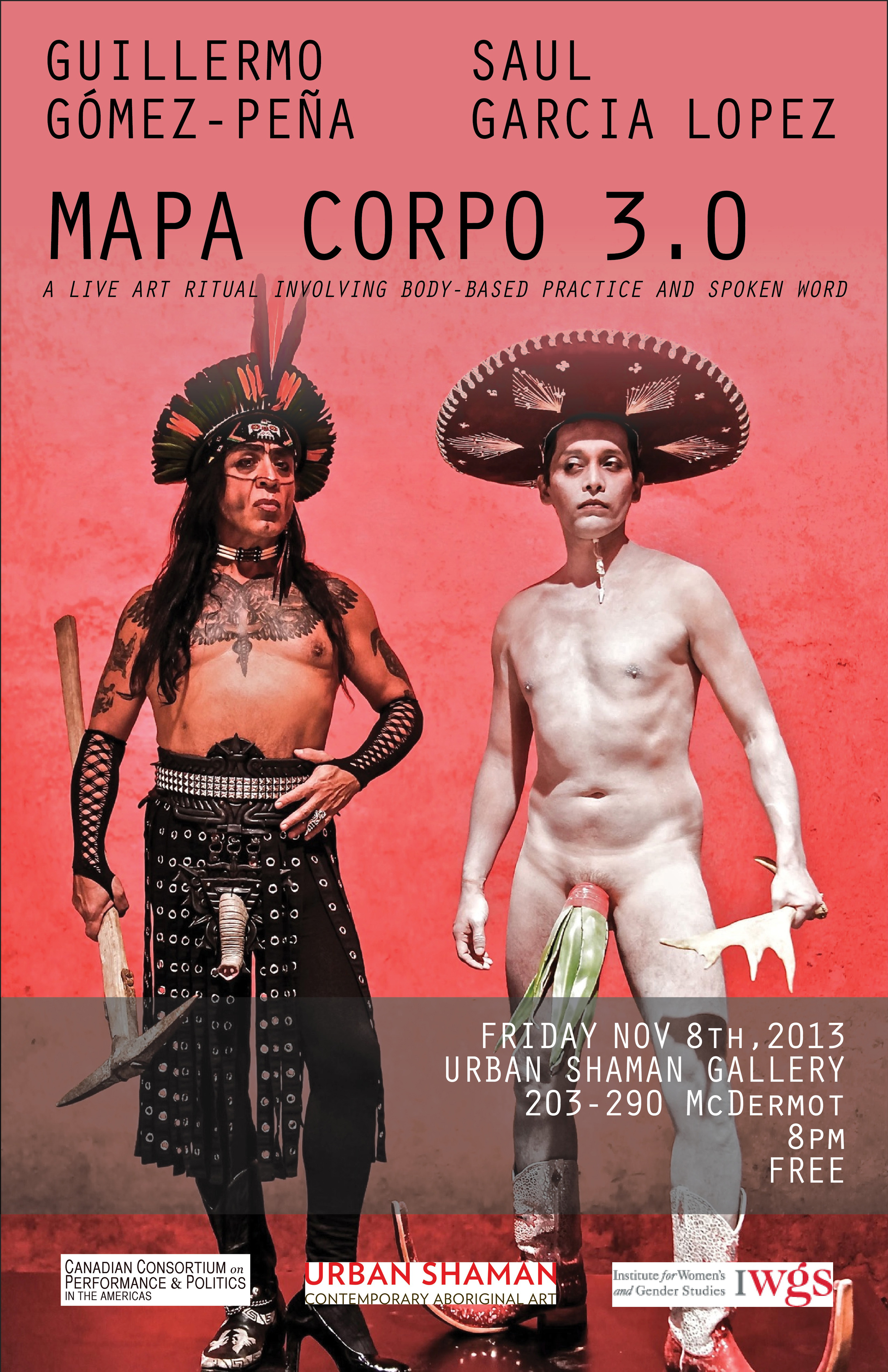 What can we possibly expect from a performance art piece described only as “a live art ritual involving body-based practice and spoken word”?

The answer can’t be summed up in a short text, or even in a video. All I can say for certain right now is that a performance, featuring Guillermo Gómez-Peña and Saul Garcia Lopez, and entitled Mapa Corpo 3.0, will occur at Urban Shaman Gallery on Nov. 8.

If we don’t know what will happen, at least we can delve a bit into how these artists have defined their performance practice, and the performances they’ve held in the past, following the—potentially futile—hope that we may get a sense of what comes next.

For those unfamiliar with his work, Gómez-Peña has created a photo gallery and virtual archive of his work online, stating:

“For over 30 years, I’ve been obsessed with photographic documentation of my performance work always in dialogue with history. Why? As a self defined Chicano, I need to be in control of my image. If not, Anglo theorists and curators will.”

Bearing this in mind, Gómez-Peña chooses whose words and appraisals of his work will be given space in this virtual gallery, and includes insight into his performance pieces that was provided by Laura Levin:

“In his celebrated performance art pieces, this complex negotiation [of destabilizing purist and tourist conceptions of cultural identity] is played out in cheeky acts of translation and mistranslation, with performance personae making up words, switching accents, blending languages, and ultimately ending up somewhere that can neither be described as English or Spanish, art or activism.”

This virtual history is, of course, completely subjective, an element openly acknowledged, and indeed encouraged, by Gómez-Peña:

“This performance photo album in permanent progress was conceived as an activist intervention into the historical discourses of performance art that often exclude the contributions of Latin American and Chicano artists. At the same time, it is an invitation [ . . . ] for my performance artist peers to engage in similar genealogical projects; to think of ourselves as artist/documentarians.”

Through the performance troupe La Pocha Nostra (of which Gómez-Peña is a director and Garcia Lopez is a member), artists are invited to “ challenge, cross, and erase dangerous borders between art and politics, practice and theory, artist and spectator, mentor and apprentice, body and cultural nightmares.”

La Pocha Nostra describes itself as an “intercultural poltergeist,” an “an ever-morphing trans-disciplinary arts organization,” a “virtual maquiladora, a conceptual assembly plant that produces brand-new metaphors, symbols, images, and words to articulate the complexities of our times.”

Many of the teachings of La Pocha Nostra, who hold workshops in order to form communities of artists, albeit temporarily, have been summarized in a book by Gómez-Peña and Roberto Sifuentes, titled Exercises for Rebel Artists: Radical Performance Pedagogy.

These teachings will also be shared after the performance on Nov. 8, as it is also the first event—and the only event open to the public—of the Inter-cultural Dialogue Performance Workshop, facilitated by Gómez-Peña and Garcia Lopez.

After the performance, Gómez-Peña, Garcia Lopez, and the workshop participants will be working for the next five days to “develop new models for relationships between artists and communities which are neither colonial nor condescending.”

Perhaps we will see signs of these new communities beginning, borders being challenged, and the playfulness of language at Mapa Corpo 3.0 on Nov. 8, or perhaps it will be something else entirely.

In the meantime, explore the living archive created by Gómez-Peña at interculturalpoltergeist.tumblr.com, and experience Mapa Corpo 3.0 in person on Nov. 8 at Urban Shaman Gallery, 203-290 McDermot Avenue at 8 p.m.

Bridging a gap through speech and performance