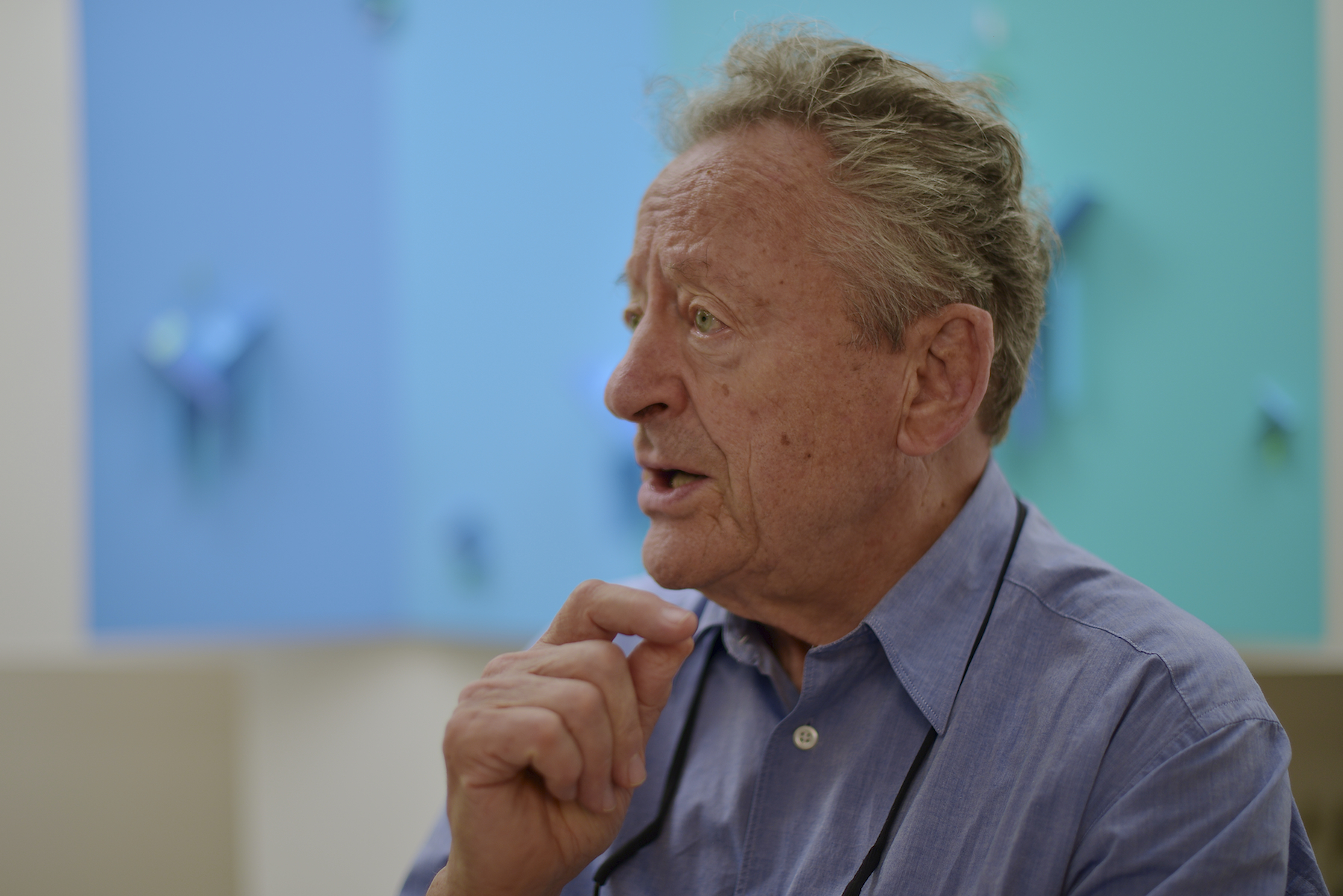 What do you expect from an artist who has lived almost one century? If that artist is 90-year-old Eli Bornstein, expect something magnificent.

Curator Oliver Botar organized An Art at the Mercy of Light, a show of 20 of Bornstein’s works from 1995 to 2013 at the University of Manitoba’s School of Art Gallery. He explains that the artist is still working regularly.

“He’s making art every day, and he’s making the best work of his career right now.”

Botar refers to Bornstein as one of the most sophisticated Canadian colourists, along with Agnes Martin and Yves Gaucher, and goes on to describe how his labour-intensive and perfectionist approach provides a rare complexity and harmony of colour.

“In his early work, he created simpler works, using primary colours on a white background. Over the years, his use of colour has become increasingly complex, although it’s never been baroque. Despite first appearances, there are differences between the colours of his ground planes; the more you look, the more you see how different each tone and hue are.”

Prolonged contemplation is encouraged for visitors to this exhibition.

“You can’t appreciate his works unless you stand in front of them and take time,” says Botar. “It doesn’t give itself up immediately. Give it time.”

Bornstein, described as an elegantly dressed gentleman, is the founder of Canada’s longest-running arts magazine, the Structurist. The magazine printed its last issue in 2010 after half a century of publishing on the forefront of artistic, cultural, and scientific advancement. Bornstein exemplifies the qualities of the periodical – in May this year he was the only Canadian invited to give a keynote address for the international conference 100 Years of Abstract Art: Theory and Practice at Jacobs University in Bremen, Germany.

Mary Reid—director of the gallery—and Botar partnered with the U of M bookstore to acquire back issues of the magazine. Visitors can purchase many of its 31 issues.

Botar celebrates the journal as an unprecedented achievement.

“It’s entirely unique; there’s nothing like it, even internationally.”

The Structurist was different from the average art history journal. It offered excellent scholarship, but it was also the first arts periodical in Canada to publish nature photography, articles on science and technology, and address environmentalism. It was the first Canadian art journal to publish the NASA photographs of Earth from space in 1971. Of the two galleries, the smaller room has three works by Bornstein and all issues of the journal on display.

Botar is a full-time professor and his curatorial work needs to meet certain criteria. His field is early 20th-century modernism, and he occasionally does contemporary art shows.

Bornstein is unique in that he has a firm foundation in early modernism, informed by the work of artists like Piet Mondrian and Paul Cézanne; but the artist’s modernism is not what Botar calls the stereotypical, Clement Greenberg-based genre, which avoided questions of politics, nature, science, or architecture.

Botar said that while interest in abstraction comes and goes regularly, there has been a tendency towards perceptual art in the last 10 to 15 years that is focused on light, such as that found in the work of James Turrell and Olafur Eliasson.

Turrell’s and Eliasson’s works use projected light while Bornstein’s pieces have the colour contained in the material, but all three artists typify perceptual art’s invitation to learn how to see. Bornstein’s works do not resemble nature, as they are abstract, shares Botar, but they derive their colours and configurations from nature.

Bornstein’s artwork is already visible at the U of M; his free-standing work in greens outside the Architecture II Building has been in place since 2007, and soon, the south wall of the Frank Kennedy Centre will be adorned with the immense piece that once captivated travellers strolling through the old Winnipeg Airport.

Meet the U of M’s first eco-marathon team