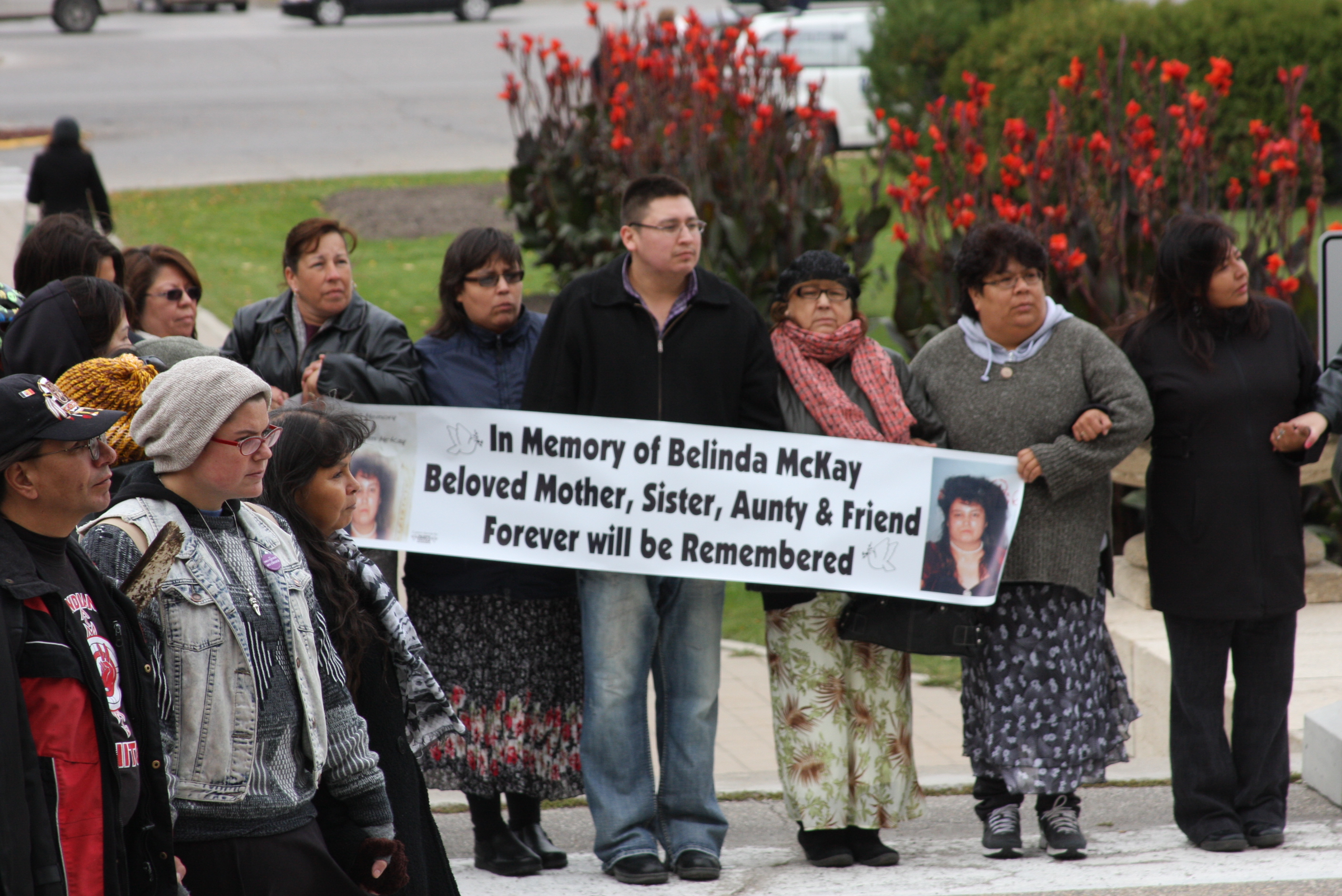 Relatives and supporters gathered outside the Manitoba Legislative Building last Friday to remember missing and murdered Aboriginal women, and to call on the federal government to formulate a national action plan to address the ongoing tragedy.

The Oct. 4 event was held in conjunction with similar rallies across Canada marking the eighth annual National Day of Vigils for missing and murdered Aboriginal women in Canada.

The crowd began to grow at about 4 p.m., in front of the legislature’s steps, which were outfitted with a large arrangement of candles and floral bouquets supplied by sponsors.

Elder Jennifer Thomas led the crowd through an opening prayer, and was followed by musical performances by Leanne Goose, Jade Turner, and Sierra Noble, as well as a number of traditional songs.

Judy Wasylycia-Leis, former Member of Parliament representing Winnipeg North and former Cabinet Minister for the Manitoba provincial government, spoke to the crowd, criticizing the federal government for what she portrayed as a lack of serious engagement on the issue.

“In no other case of a national emergency can we think of a federal government response that has been so out of keeping, and so out of step, with the scale and the severity [of the issue] as the [response to the] tragedy of missing and murdered Aboriginal women in Canada,” said Wasylycia-Leis.

“We know that there can be no justice without a national plan of action to address what only can be described as a national human rights tragedy,” she continued.

Wasylycia-Leis, who has attended the National Day of Vigils since its 2006 inception, explained to the Manitoban what she thinks a national plan of action should entail.

“There are five areas that have to be included in a plan of action. The first is recognizing the right of indigenous women to efficient and unbiased policing in all cases. The second is [ . . . ] stable funding for indigenous women’s organizations. The third concerns the collection of good data, and the fourth is education and support of men.”

“The fifth point,” concluded Wasylycia-Leis, “is to recognize that the roots of the problem go to economic and social issues – especially the economic gap between indigenous and non-indigenous peoples.”

Guest speaker and Idle No More activist Robert Animikii Horton also expressed frustration at government inaction. Horton argued that due to the central role of women in indigenous life, their routine disappearances amount to genocide.

“We must perceive this as an overt genocide by Canada [ . . . ] they turn a blind eye, cover their ears, and treat our sisters as if they don’t matter.”

University of Manitoba Aboriginal Students Association (UMASA) co-president Kyra Wilson, who was in attendance on Friday, said that in many cases disappearances are preceded by feelings of alienation.

“The issue is that a lot of are youth are feeling left out [ . . . ] when youth are not feeling supported, they often turn to the streets to feel like they are a part of something, and that is where they are being exploited. That is when they can become missing, or can even be murdered,” said Wilson.

While UMASA was not directly involved in organizing the event at the legislative building, Wilson says that the group has several other projects on the horizon, including a teach-in on Friday, Oct. 11 in regards to education rights for indigenous peoples, and a visit with a United Nations special rapporteur on Saturday.

The candlelight vigil wrapped up shortly after 6 p.m., with families accepting bouquets of flowers from the arrangement on the steps – a gesture to honour missing sisters, mothers, and daughters.