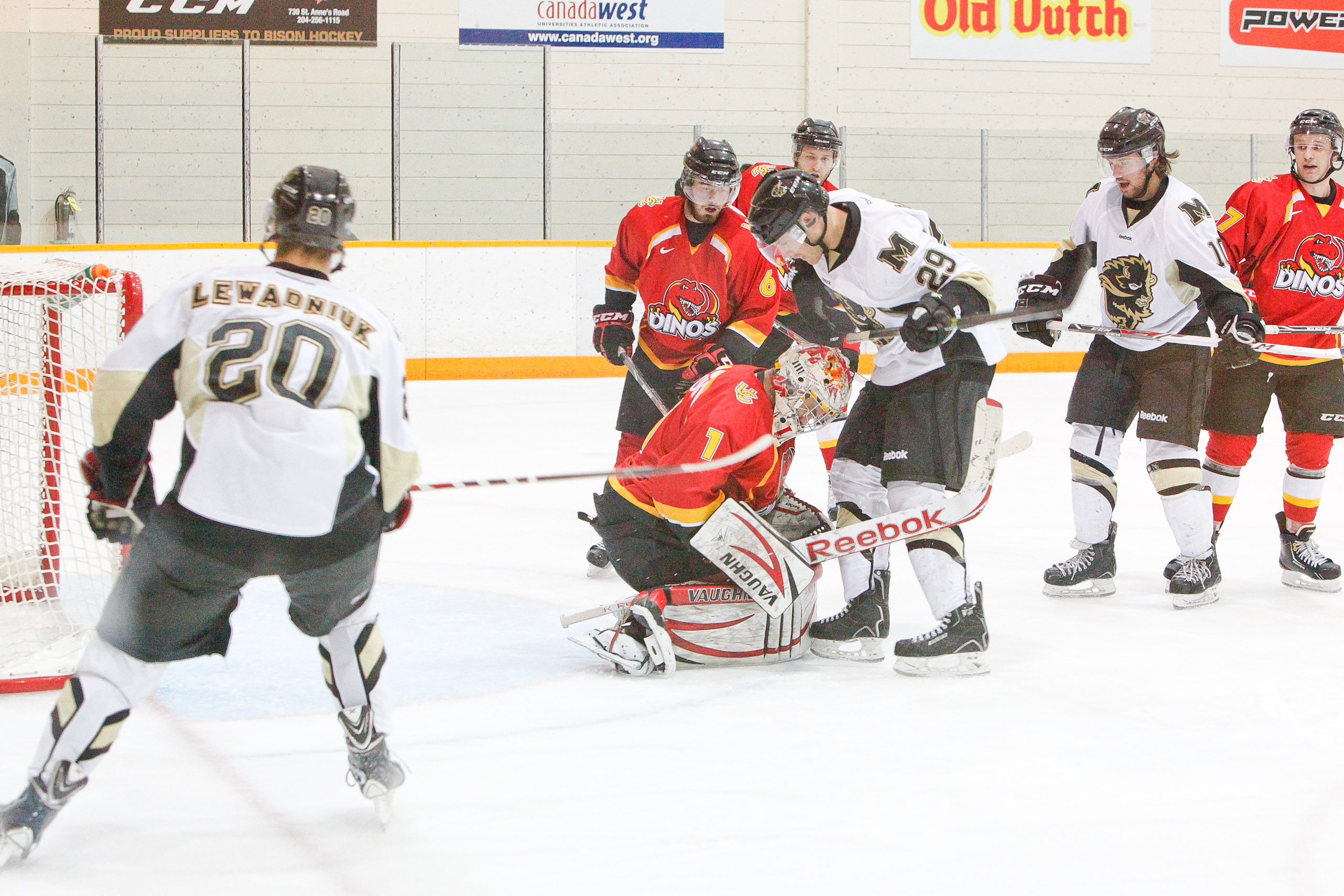 The University of Manitoba men’s hockey team dropped two close games against the undefeated Calgary Dinos over the weekend in the Wayne Fleming Arena at the Max Bell Centre. On Oct. 25, a back and forth game ended with a heartbreaking 4-3 overtime loss.

The Bisons came out with a ton of energy to start the game Friday night, generating a number of quality chances and outshooting Calgary 11-8 in the first frame. Their persistence paid off 16 minutes into the period, as veteran forward Luke Cain notched his first goal of the season from close range.

Manitoba’s defence, led by captain Dane Crowley, did a great job limiting the third-ranked Dinos’ chances in the first, as the Bisons took the early momentum.

The Bisons ran into penalty trouble late in the second, which seemed to take the wind out of their sails. Calgary tied the game up at 17:44, on a goal by forward Adam Kambeitz, just over two minutes after the first Manitoba penalty.

The visitors were able to capitalize on a five-on-three advantage with less than a minute left in the period, as defenceman Cory Pritz blasted a slapshot from the point, giving Calgary a 2-1 lead heading into the third.

The action heated up in the final 20 minutes, as the teams went back and forth. Manitoba forward Dylan Kelly started things off just 1:12 in, scoring off a brilliant pass from assistant captain Jesse Paradis. Calgary retook the lead at 15:52, as defenceman Davis Vandane notched the Dinos’ second power play goal of the night. Manitoba persisted, however, tying things up on a Crowley breakaway goal with 2:35 remaining. The late goal forced overtime.

Calgary dictated the pace in the extra session, ending the Bisons’ chance at an upset with a four-on-three power play goal by defenceman Dryden Dow at 4:14 of overtime.

Penalties were the difference in this one, as Calgary scored three times with the man advantage.

Despite the loss, head coach Mike Sirant was happy with how his team responded in the third. “We showed a lot of resiliency coming back twice after being down. I did see us take a step forward as a team in the third period, and we’ve got to build on that for tomorrow night.”

The following evening, the Bisons suffered another tough loss, falling 5-3.

Manitoba got things going early: Paradis scored his first of two goals at 10:47 on the power play. Calgary answered with 2:54 remaining, as Cory Pritz, a thorn in the Bisons’ side all weekend, notched his third goal of the season.

The Dinos took the lead during a double minor penalty to Bison forward Jordan DePape, as defencemen Giffen Nyren scored with just 14 seconds remaining in the first period.

The Dinos built on the momentum from the late goal and ran with it, scoring twice in the second. The goals came from forward Walker Wintoneak, at 6:25 and 19:22.

The Bisons showed determination in the third, closing the gap to one goal, as forward Paul Ciarelli tallied his first of the year at 5:32, followed by Paradis’ second of the evening at 18:28.

Manitoba’s comeback fell short, as Calgary forward Blake Clement scored an empty net goal in the final minute. The Dinos dictated the pace, outshooting the Bisons 33-24 in their 5-3 victory.

With the pair of losses, Manitoba falls to 2-6-0 on the season, while Calgary remains undefeated at 8-0-0. The Bisons will go into their conference bye next weekend, and will not play until Friday, Nov. 8 in Regina.

Manitoba produced all three of their goals in the first period and held on the rest of the way for a 3-1 victory against Calgary on Oct. 25. Scoring for the Bisons were Meagan Vestby at 1:04, Kyleigh Palmer at 17:51, and Brenley Anderson at 18:34. The lone Calgary goal was scored by Janelle Parent at 10:01 of the second period.

The rematch the following evening produced far less successful results for the Bisons, as they were outshot 28-21 and outscored 3-0. Scoring for Calgary were Stephanie Zvonkovic at 18:23 of the first, and Janelle Parent, who netted a goal in both the second and third. Amanda Tapp got the shutout for the Dinos.

After taking one out of two games, the Bisons’ record stands at 4-3-1, while Calgary stays just behind them, at 3-4-1. Manitoba will face the Regina Cougars next, playing on Nov. 1 and 2 at Wayne Fleming Arena.

Bisons get clawed by the Cougars