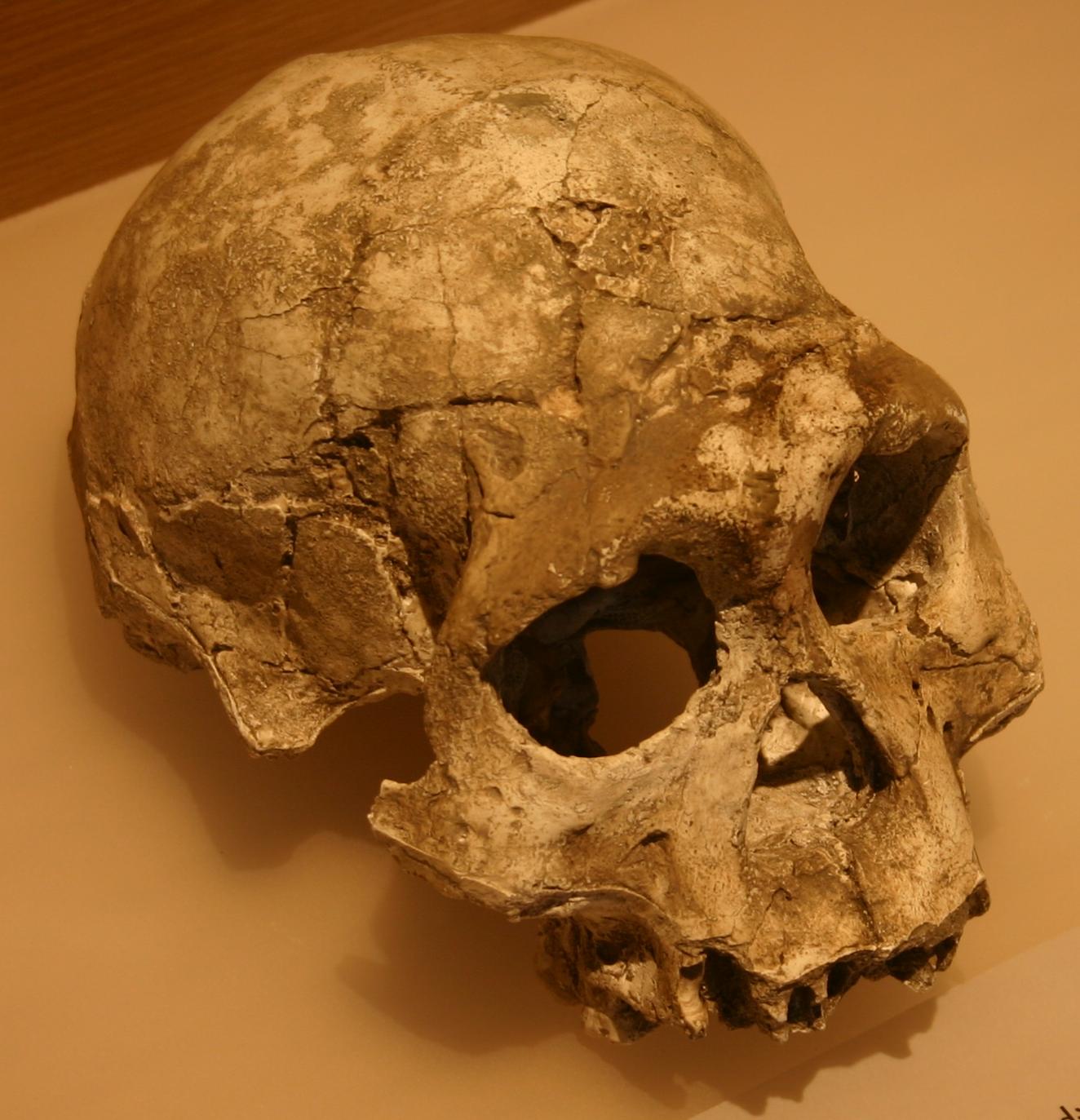 A skull at the Georgian National Museum. Photo by Jonathan Cardy. Used under CC Attribution-Share Alike 3.0.

Just in time for Halloween, a controversy has erupted in the scientific community over an early human skull that was found in a dig site in Dmanisi, Georgia.

In 2000, a jaw bone was discovered at the site and the corresponding skull was found soon after in 2005. A new analysis of this skull-the most complete adult skull of an early human that has ever been found-suggests that the history of early human evolution may have to be rewritten. The early humans-or hominins-are classified across three different species: Homo habilis, Homo rudolfensis, and Homo erectus. With this new skull finding, the Dmanisi team, led by David Lordkipanidze and consisting of scientists from Georgia, Switzerland, Israel, and the United States, proposed in the journal Science that early humans all belong to the same species, Homo erectus. The team also suggested that the differences attributed to the fossils are due to variations found within the species rather than speciation.

Four other skulls have also been uncovered at the Dmanisi site. These skulls are known to belong to the same geological time period of approximately 20,000 years – very small, in evolutionarily terms, and thus not long enough to contribute to speciation. In this way, it can be strongly assumed that all five skulls belong to the same species of a single population.

This is where the controversy begins.

When the skulls were compared, the amount of variation observed was comparable to the variation seen in modern humans, as well as in chimpanzees. The researchers suggested that the variations across the different species of early hominins may in fact be variations of a single species. Thus, the proposal is that the Dmanisi humans represent a continuous evolution of the Homo erectus species, implying the potential for near-global genetic continuity. Not all scientists are in agreement with the hypothesis.

Fred Spoor, paleontologist at the Max Planck Institute for Evolutionary Anthropology in Leipzig, Germany, called the skull “an absolutely fabulous specimen” that will help scientists “figure out what’s going on with the really early evolution of Homo erectus.”

However, Spoor disagreed with the one-species hypothesis, saying that an analysis based strictly on cranial shape “is clearly not adequate.” Instead, he says the team should have examined specific anatomical traits such as braincase height or eye socket diameter.

Bernard Wood, a palaeoanthropologist at George Washington University in D.C., also takes issue with the “one big species” idea. Although Wood acknowledges that “there’s no doubt that this is an interesting cranium,” he objected to “[bringing] the whole bloody house down” by lumping all three species of early Homo together based on a cranial analysis alone.

Lee Berger, a palaeoanthropologist at the University of Witwatersrand in Johannesburg, also acknowledged the significance of the find, but told CNN that the Dmanisi team is “taking the available evidence too far.”

Commenting on the one-species hypothesis in an article in the Independent, Chris Stringer, head of human origins at the Natural History Museum in London, England, said, “we need similarly complete African fossils from 2-2.5 million years ago to test that idea properly.” Stringer suggests that some, but probably not all, early Homo fossils could belong to H. erectus.

Regardless of what the current opinions on the published study may be, Lordkipanidze said that “Dmanisi is a snapshot in time, like a time capsule,” and praised the site’s “enormous potential to yield new discoveries.”