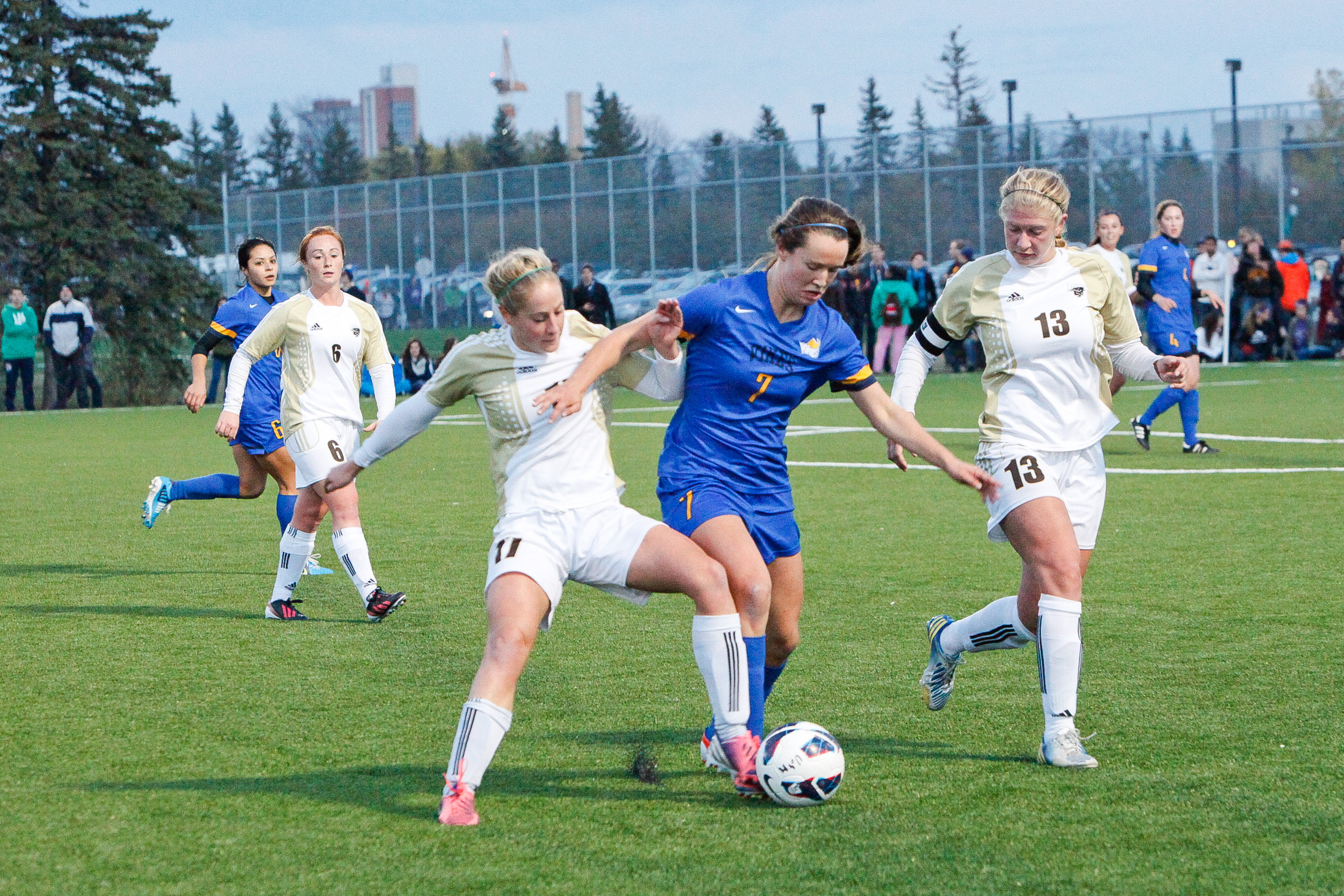 The Manitoba Bison women’s soccer team was officially eliminated from playoff contention with a loss at home, falling 1-0 to the Victoria Vikes.

The Vikes were the far stronger team, heading into the game with an 8-2 record. Nonetheless, the Bisons were able to keep things close in a fairly even match.

After a few close chances, including a shot that went off the crossbar, Victoria was able to solve goaltender Chloe Werle in the 28th minute. Carlita Branion-Calles scored on a wide open net as Werle attempted to grab the loose ball.

The two teams would head into the half with Victoria holding onto the one-goal lead. The Vikes continued to generate quality chances in the second half; however, Werle stood strong in net.

Manitoba’s best chance of the half came in the 82nd minute. Daniella Scerbo had a shot at a loose ball in the box, but it was quickly grabbed by Victoria goalie Tanya Jones.

After being eliminated from playoff contention, the Bisons looked to finish the season on a positive note the following evening. Despite battling hard, they were unable to overcome the Fraser Valley Cascades and lost 2-1.

Manitoba was unable to generate much offence in the first half, being outshot 10-3. Fraser Valley kept the pressure in the Bisons’ end, creating a number of scoring opportunities. Chloe Werle held strong in net for Manitoba, but was eventually cracked in the 37th minute by forward Shelby Beck on a pass that split the Bison defence. Fraser Valley took the 1-0 lead into the half.

Fraser Valley continued to dictate the pace early in the second half, preventing Manitoba from getting any sort of momentum. Things went from bad to worse for the Bisons in the 56th minute, as fifth-year defender Gillian Sidon took down forward Carly Neeson in the box, resulting in a penalty kick. Neeson would make no mistake, extending the Cascades’ lead to 2-0.

Sidon was one of two Bison players participating in their final CIS game. Sidon was a leader on a young Bison squad, starting in 53 games over her Bison career. She showed perseverance, making up for the earlier penalty and getting Manitoba on the board in the 74th minute on a rocket shot just outside the box.

Laura Stewart was the other graduating Bison, having played in 26 matches over her career.

Coach Vanessa Martinez-Lagunas was pleased with the play of both her graduating players, also noting how important the game was for them.

“I’m just happy for them; they played hard and had a good game, both of them.”

Sidon’s goal seemed to ignite the Bisons: they picked up the tempo in the last 15 minutes, but were unable to tie the game, falling just short. With the loss, the Bisons finished the regular season with a 1-7-4 record, with Fraser Valley ending up 5-4-3.

Despite failing to qualify for the playoffs, Martinez-Lagunas maintained a positive outlook for next season, focusing on strengthening and growing the team.

“This season I said I wanted to invest in development. This is a really young team. I think most of the young players got plenty of minutes of playing time. It’s a good experience for them.”