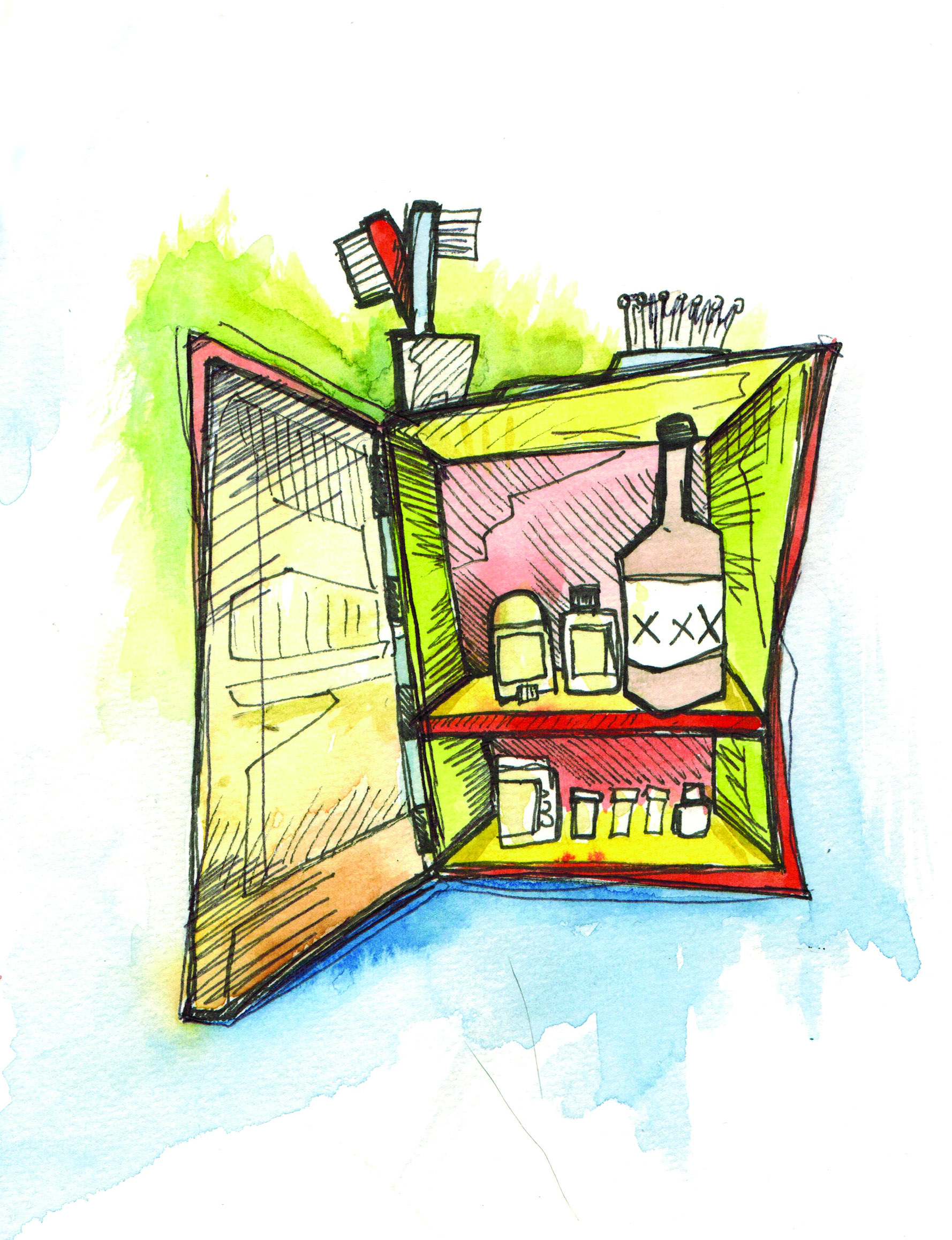 Twenty per cent of Canadians experience mental illness dur­ing their lifetime, and 20 per cent of those Canadians will at one time or another develop problematic self-medication and substance abuse.

After 20 years of living with extreme nervous behavior and panic attacks, I was diagnosed with an anxiety disorder. My symptoms range in severity: from shakes, to stammers, to hyperventilation and difficulty breathing, depression, chronic insomnia, and a strange bout of “stress-induced” cancer that I had surgically removed. Over the last five years I’ve tried different medications—some prescribed, some not—and coping methods, and the overwhelming days have become (relatively) fewer and fur­ther between.

While currently I feel more self-aware than ever, when you live with a mental illness, you are constantly in a state of recovery.

I got into an argument with a friend not long ago because I was broke and still chose to go to the vendor and buy beer, even though I was living off of ramen and Kraft Dinner. His sentiment was simple: “If you’re so broke, why are you buy­ing beer?”

This made me realize two things: one was that I was becoming depen­dent on alcohol to lower my anxi­ety levels, and another was that I couldn’t possibly explain the neces­sity to self-medicate to my currently judgmental friend. The conversa­tion didn’t end well; I probably said something along the lines of “Mind your own fucking business,” and my friend smugly thought he had me all figured out.

The stigma that people who live with a mental illness encounter is often worse than the illness itself. Stigma can lead to self-harm and substance abuse as the mentally ill person attempts to cope. Whether it is around friends, at work, on television, or even in the doctor’s office, the attitudes and behaviours that people have toward those living with a mental illness can be enough to make someone hide their symp­toms and thus risk a worsening of their condition.

According to the Pan-Canadian Opinion Survey put forth by the Mood Disorders Society of Canada in November 2011, there are significant gaps in the mental health care system. Thirty-five per cent of those surveyed said they had waited 12 months for a diagno­sis of their mental illness, 59 per cent of respondents reported that a lack of insurance kept them from receiv­ing the health care they need (therapist, psychologist, medi­cation, etc.), and 52 per cent reported that hospital emergency rooms were unprepared for emergencies related to men­tal illness. With these types of barriers on your road to recovery—matched with the towering social stigma—it shouldn’t surprise us that some may want a drink along the way to smooth over the bumps.

In addition to demanding improvements within our mental health care system, the public in general needs to be fur­ther educated on what mental illness actually is. If someone has a mental illness as a result of post-traumatic stress, telling them to “cheer up,” or recommending that they try a new diet and exercise is probably not helpful. A mental illness can be debilitating and affect more than one aspect of your life; in addition to therapy and medication, recov­ery can involve job, housing, and financial assistance, and family and marital counselling.

A common misconception is that addiction causes mental illness. While addiction and mental illness are closely related—and addiction can definitely worsen symptoms of mental illness—it is more typically the case that addictions stem from self-medicating mood, anxiety, and other personality disorders. If you have both a mental illness and an addiction, that is called a co-occur­ring disorder or dual diagnosis – the important thing to note is that these are separate issues that often need separate, though complementary, treatment.

According to the National Alliance on Mental Illness, about 50 per cent of people living with men­tal illness are affected by substance abuse.

The National Comorbidity Survey taken from 1990-92 found that “42.7 per cent of individuals with a 12-month addictive disorder had at least one 12-month mental disorder.”

Unfortunately, integrated treat­ment for co-occurring disorders is not widely available for those who need it. Mental health professionals are often not prepared to treat both mental illness and addiction, and people living with mental illness often get denied necessary and suf­ficient treatment because they have trouble with sobriety.

In addition to integrated treat­ment, an understanding that peo­ple living with mental illness are individuals with their own specific experiences and needs is crucial. There isn’t a single cause of mental illness or one way to cope, and gen­eralizing treatment methods can be damaging.

If you are experiencing a mental health emergency, Winnipeg is now home to what is believed to be the first centre devoted to mental health crisis in Canada. The Crisis Response Centre is located at 817 Bannatyne Ave. and is open 24 hours a day, seven days a week.