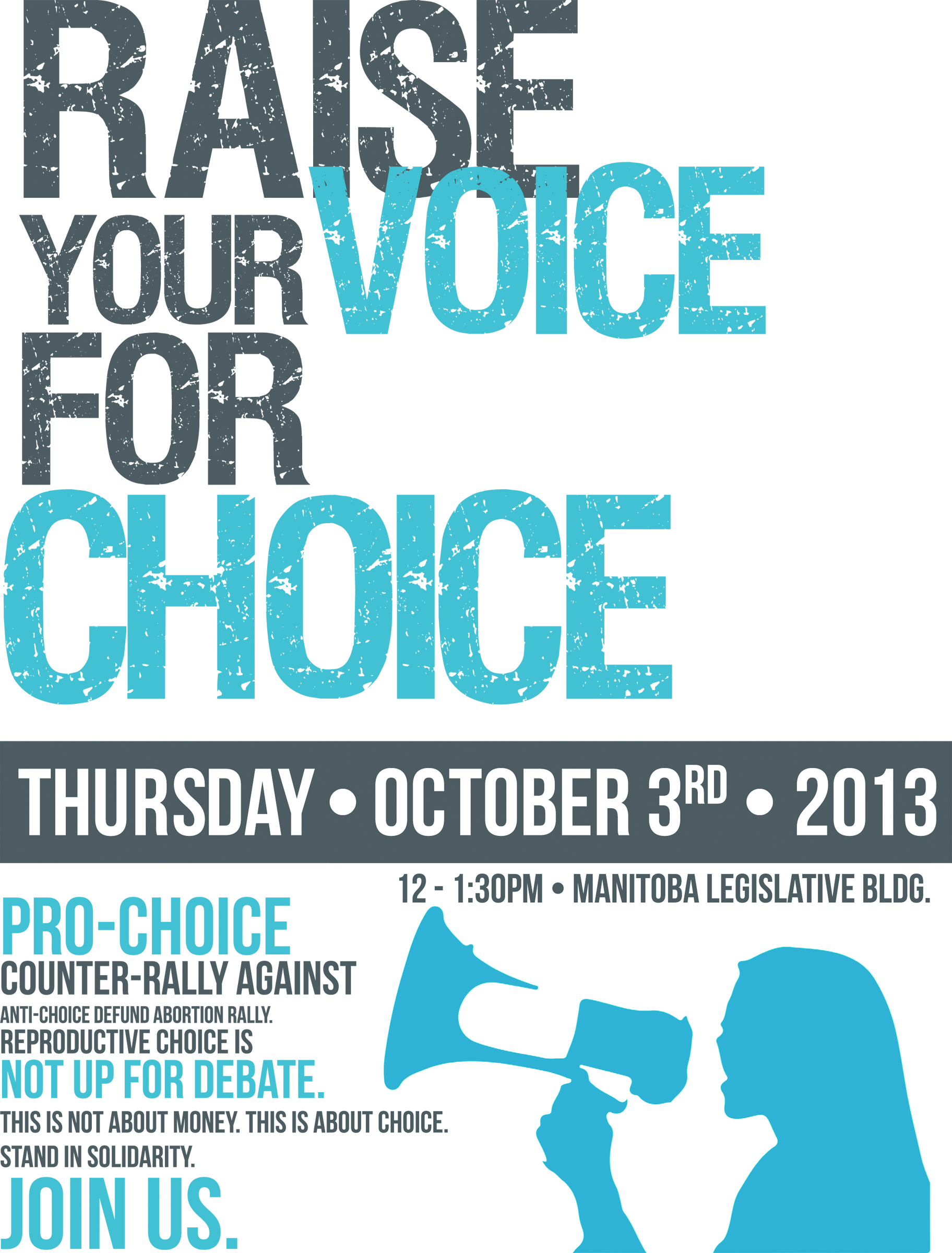 It would be hard to ignore the current debates around abortion on the U of M campus, which started with large graphic images, and have since spilled into UMSU offices and out of news outlets across Winnipeg. This Thursday, Oct. 3 at noon, the debate is moving to the legislature grounds in the form of a “Raise Your Voice for Choice” rally.

This gathering is more than a simple reminder of the existence of the pro-choice movement. It came—like the outcry against graphic images on campus—as a response to a “Manitoba Defund Abortion Rally,” whose goals are well made evident by their name. The “Raise Your Voice for Choice” counter-rally was put together by the Manitoba Federation of Labour (MFL) along with a group of concerned citizens who believe that abortion should continue to be fully funded, and question why this is still open for debate.

Just this January, the CBC marked 25 years of “unrestricted access” to abortion procedures by calling around to see firsthand what trying to arrange an abortion procedure would be like, and received inaccurate information from three of eight Manitoba hospitals. Ray Eskritt, one of the concerned citizens involved in this rally, pointed out that even though abortion is funded in Manitoba, women in rural and northern areas still have “poor access” to the service.

This concern is echoed by the Abortion Rights Coalition of Canada (ARCC), which noted, “Fewer than one in five Canadian hospitals provide abortion services, even though it is a common and simple medical procedure.”

As Eskritt and others have pointed out, the funding that exists already does not guarantee equitable and non-judgmental access to abortion services – there is still work to be done to close gaps in access to funded abortion and reproductive health services.

Some continue to question why funding is still being debated at all.

“Not only is this [defunding abortion rally] a threat to women controlling their body [ . . . ] it is also a pandora’s box of hand-picking which aspects of our publicly funded health care will remain publicly funded,” states the MFL website, referring to the counter rally.

Eskritt notes that sometimes our tax dollars end up going to things we don’t support.

“[That doesn’t change the fact that] health care is a human right [ . . . ] We’re well past debating whether pregnant women are entitled to the same human rights as the rest of us.”

Once a woman is pregnant, support from our publicly funded health care system is unavoidable.

“Pregnancy outcomes are inescapable, meaning that a pregnant woman cannot simply cancel the outcome – once she is pregnant, she must decide to either give birth or have an abortion,” says Joyce Arthur, executive director of the ARCC. “To protect her health and rights, both outcomes need to be recognized as medically necessary and fully funded, on an equal basis.”

“Abortion [ . . . ] is not an elective procedure,” says Arthur. It is technically classified as a medically necessary service under the Canada Health Act, the act that determines how services should be provided, including what services should be accessible and funded.

Arthur, as well as those involved in the “Raise Your Voice for Choice” rally, believes that the core issue is not really about debating funding, but about a woman’s choice and right to self-autonomy. This sentiment is echoed on a poster being circulated in support of the event: “This is not about money. This is about choice.”

Whether they agree with the question or not, it is being put forward in a very public way, and the organizers are inviting a strong response. The MFL has asked its supporters to join them and help “underscore our position once again.”

And for the general public?

“If you don’t understand the debate, come and chat,” says Ray Eskritt. “Everyone should be there.  Absolutely everyone.”

The “Raise Your Voice for Choice” rally is being held from 12 p.m. until 1:30 p.m. on Thursday, Oct. 3 at the legislature grounds. More information can be found at http://mfl.ca/category/events/mfl-event.

Canada’s sports culture and the rest of the world