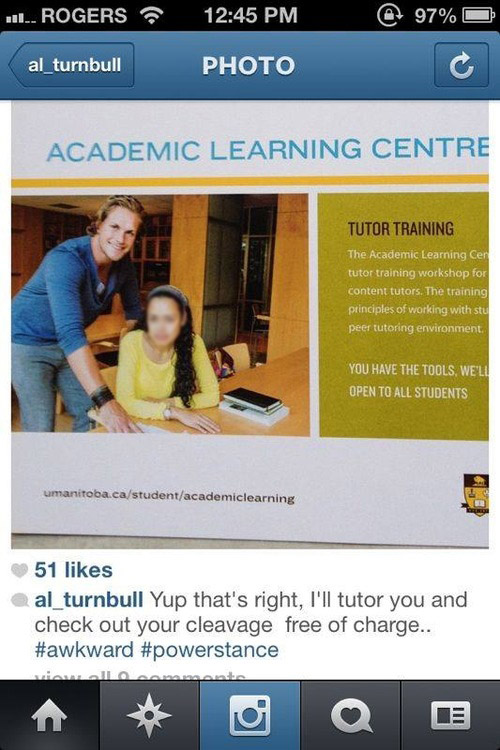 “Yup that’s right, I’ll tutor you and check out your cleavage free of charge,” reads a comment made by current UMSU president, Al Turnbull, under a photo originally posted through his personal Instagram profile.

A former employee and writing tutor of the U of M’s Academic Learning Centre (ALC), Turnbull is pictured alongside an unidentified female, posed as if to suggest that he is her tutor, in what appears to be ALC promotional materials. The aforementioned controversial comment, however, was registered beneath an Instagram photo of this staged ALC promo piece, posted by Turnbull some time ago. A tumblr page entitled umsupresident.tumblr.com was created sometime on Thursday, Sept. 12, and contains a single screengrab of the photo in question.

The image began circulating on social media sites like Facebook shortly after the Manitoban learned, on Wednesday afternoon, that the UMSU executives admitted to manually removing all Canadian Federation of Students (CFS) promotional pages and materials from the 2013-2014 U of M student agendas, prior to distributing them to students on campus this week.

In an interview with the Manitoban, Turnbull claimed responsibility for the problematic commentary in the photo, expressed remorse, and went on to note, however, that the the photograph was taken “six or seven months ago” — prior to his being elected UMSU president.

“I’ll never escape these momentary lapses in judgment; they’ll probably haunt me my entire political career. At the same time, this is the political arena and the [circulation of this photo] is a strategic move to [defame] my character directly after I made a fairly straightforward point and advancement about the CFS’s integrity within our [student agendas] contract,” said Turnbull.

In March of this year, a similarly controversial photo of Turnbull began circulating on social media networks, only days after the Fresh Slate had been announced the winner of the 2013 UMSU General Elections.

“It was all inappropriate [on my part]; I’m deeply saddened and have apologized for [both instances] as much as I can. This is no longer an attempt to evoke remorse in me or to get a reaction from the public [ . . . ] I would say that this is a red herring to [distract attention away] from the real problem here, which is some of the findings [UMSU has made regarding] the CFS nationalist component.”

Referring to the nature of the photo in question, as well as the timing and circumstances surrounding its recent release and circulation, Turnbull noted that it was “100 per cent not a coincidence.”

“This [photo] is something that is 100 per cent not new [ . . . ] at this point the purpose is different than it was before [when the first photo was released in March], where it was to expose the inappropriateness of my comments from the past,” said Turnbull. “Now it’s trying to assert that this [current photo and comment] are new, that it’s something I’ve done recently.”

“The impression that readers are going to get, or people that visit the [tumblr page], is that I did this yesterday. That was the goal of putting this out there; it was totally [in the name of character assassination]. Whoever posted this had it or [received] it from somebody who has had it for an extremely long time — we’re talking six-plus months now.”

Turnbull reiterated that he believed the timing of the photo’s release ought to be seen as an attempt to delegitimize UMSU’s ongoing effort to appraise the quality and pricing of CFS-provided student services.

“It’s really just trying to drag my character through the mud a little bit to [distract] from the real issue here, which is the CFS and some of the clauses we [the current executive] got trapped into with our [agenda] handbooks and some of the money that was lost in the process,” said Turnbull.

-With files from Quinn Richert-