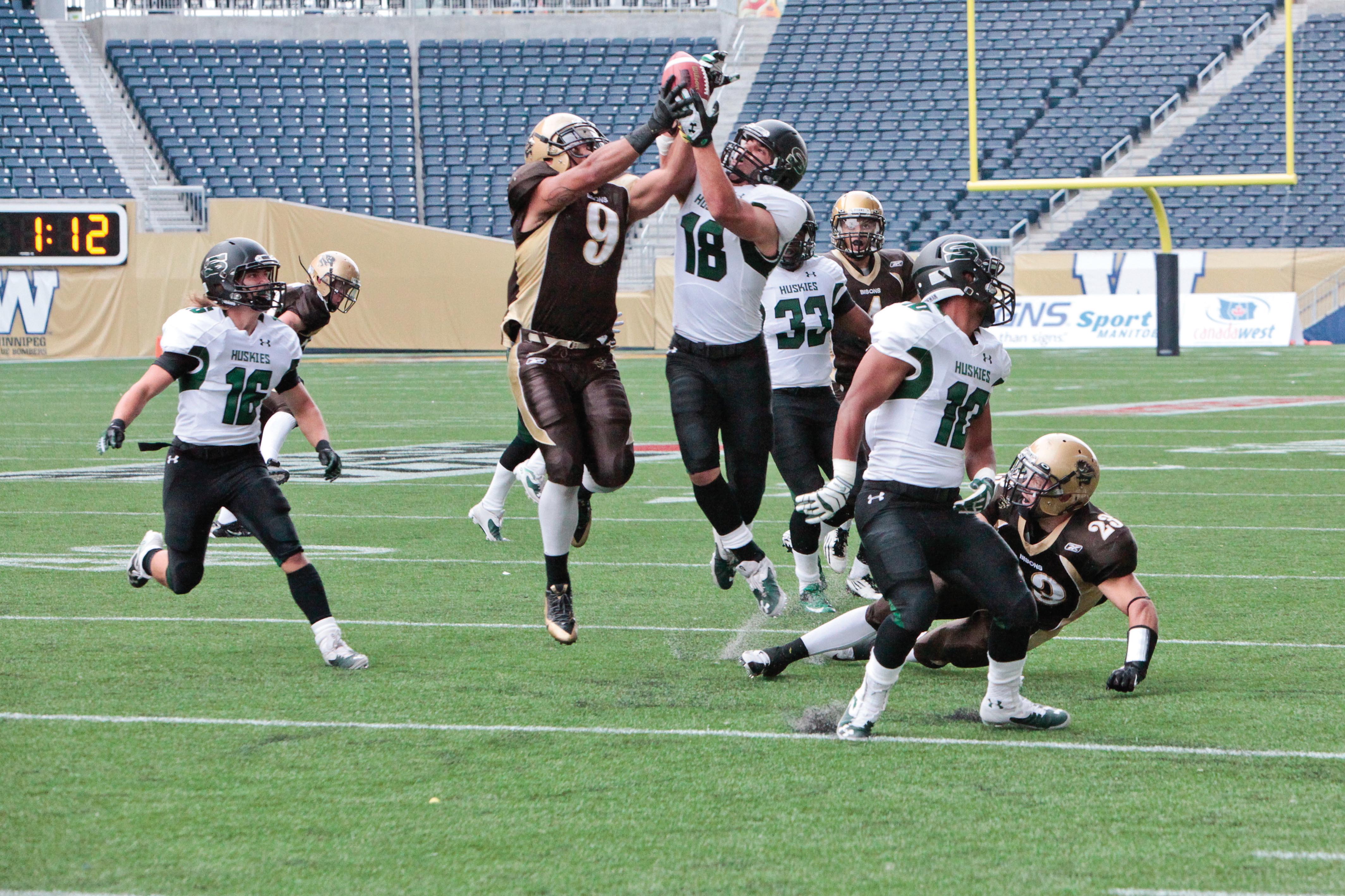 It was bound to be a great matchup, but few could have predicted the wild finish that occurred when the Bisons hosted the Saskatchewan Huskies at Investors Group Field as a part of Banjo Bowl weekend. Neck and neck in the CIS top 10 rankings, the two teams entered the game coming off big wins in week one. In his post-game comments, Bison head coach Brian Dobie described the event as “a classic Saskatchewan-Manitoba game.”

Manitoba responded on the ensuing drive, moving the ball 104 yards down the field. Quarterback Jordan Yantz capped the drive with a two-yard pass to offensive lineman Matt Hallock, lined up as an eligible receiver.

The Bisons’ front-seven pressured Huskies QB Drew Burko early and often, sacking him twice in the first quarter. The first quarter ended with the Bisons leading 7-0. Early in the second quarter, Saskatchewan running back Shane Buchanan found a hole in the Bison defence and ran 46 yards untouched into the end zone.

After the Bisons went two-and-out on their next drive, the Huskies took the lead with a Kolodzinski field goal. On the next Saskatchewan drive, Burko extended the Huskies’ lead to 17-7, hitting Garrett Burgess for a 24-yard passing touchdown.

The Bisons took over possession at their six-yard line with four minutes remaining in the half. Anthony Coombs had mostly been held in check by the Huskies defence, until he broke off a 54-yard sprint down the sideline for a touchdown that made the score 17-14.

Getting the ball back with 1:49 remaining in the half, the Bisons failed to capitalize after tricking the Huskies’ special teams with an onside-kick gadget play on a punting down. Manitoba converted the onside kick, but failed to convert their field goal attempt before half, settling for the rouge and heading into halftime trailing Saskatchewan 17-15.

Saskatchewan struck first in the second half with a 44-yard field goal. After another stalled Bison drive, the Huskies struck fast and burnt the Bison secondary with a 68-yard passing play. Slotback Mitch Stevens got behind safety Tyler Fong and hauled in Burko’s perfect pass. With the score now 27-15, the Bison offence needed to get back on track.

Despite a quiet first half, Nic Demski had two huge catches on the ensuing drive, setting up Anthony Coombs’ second touchdown of the night. Yantz handed Coombs the ball at the 16-yard line, and the third-year tailback made a cut, broke free of a would-be tackler, and sprinted in for a touchdown that cut the Huskies lead to five.

Burko and the Huskies offence continued to pick on the Bison secondary. Stevens beat safety Mitchell Harrison, catching a 49-yard pass that set up Kolodzinski’s third field goal of the night from 37 yards out.

Once again, the Bisons needed a response if they were to keep pace with the Huskies as the third quarter came to a close.

After the Bisons failed to capitalize on offence, Kolodzinski converted his fourth field goal, making it 33-27.

Down by six with five minutes remaining, the Bisons’ offensive stars stepped up to the challenge. Coombs, lined up at receiver, sprinted down the sideline and caught a 65-yard pass from Yantz that set the Bisons up in the red zone for the first time in the fourth. Yantz finished the drive with a two-yard touchdown pass to Nic Demski. The Bisons pulled ahead, 34-33 with 4:07 remaining.

The Huskies offence renewed their assault on the Bison secondary. After a blocking below the waist penalty forced a long second down, Burko completed another deep pass to Mitch Stevens, setting them up at the Bison 10-yard line. The Bisons held strong and stuffed Burko on a third-down gamble from one yard out.

Holding onto a one-point lead, Yantz and the Bison offence failed to move the ball. The Huskies forced Boyd to punt out of the Bison end zone.

The game ultimately came down to the sure-foot of Kolodzinski, who completed his perfect game by booting a game-winning 40-yarder through the uprights. The Bisons scrimmaged from their 35-yard line with just 18 seconds remaining, but an offside penalty proved all too costly. Time ran out on the Bisons’ comeback attempt.

Yantz finished the game having completed 25 of 41 passes for 374 yards and two touchdowns. Coombs—named the Canada West player of the week for his performance in the home opener against Alberta—was a dominating force, compiling 202 all-purpose yards and two rushing touchdowns. Andrew Smith also had a productive night, hauling in seven catches for 132 yards.

Dobie commented on the critical two-and-out in the final minute of the game that had set up Kolodzinski’s heroic finish.

“We all did what we had to do – we stopped them on the one,” said Dobie. “But we knew that time was an issue at that point, and I made a mistake.”

“We ran a quarterback wedge right off the hop, and the clock wasn’t the issue then, the clock was our enemy. We should have thrown twice out of the end zone and tried to get a first down,” Dobie added.

“I feel sorry for everybody else who has to play us next,” said Yantz, commenting on the heartbreaking nature of the loss.

“This team is going to be that much more hungry. As much as this upsets all of us, we can only grow from this and get better.”

The Bisons (1-1) will travel to Vancouver to play their next game against the UBC Thunderbirds (1-1) on Sept. 14.