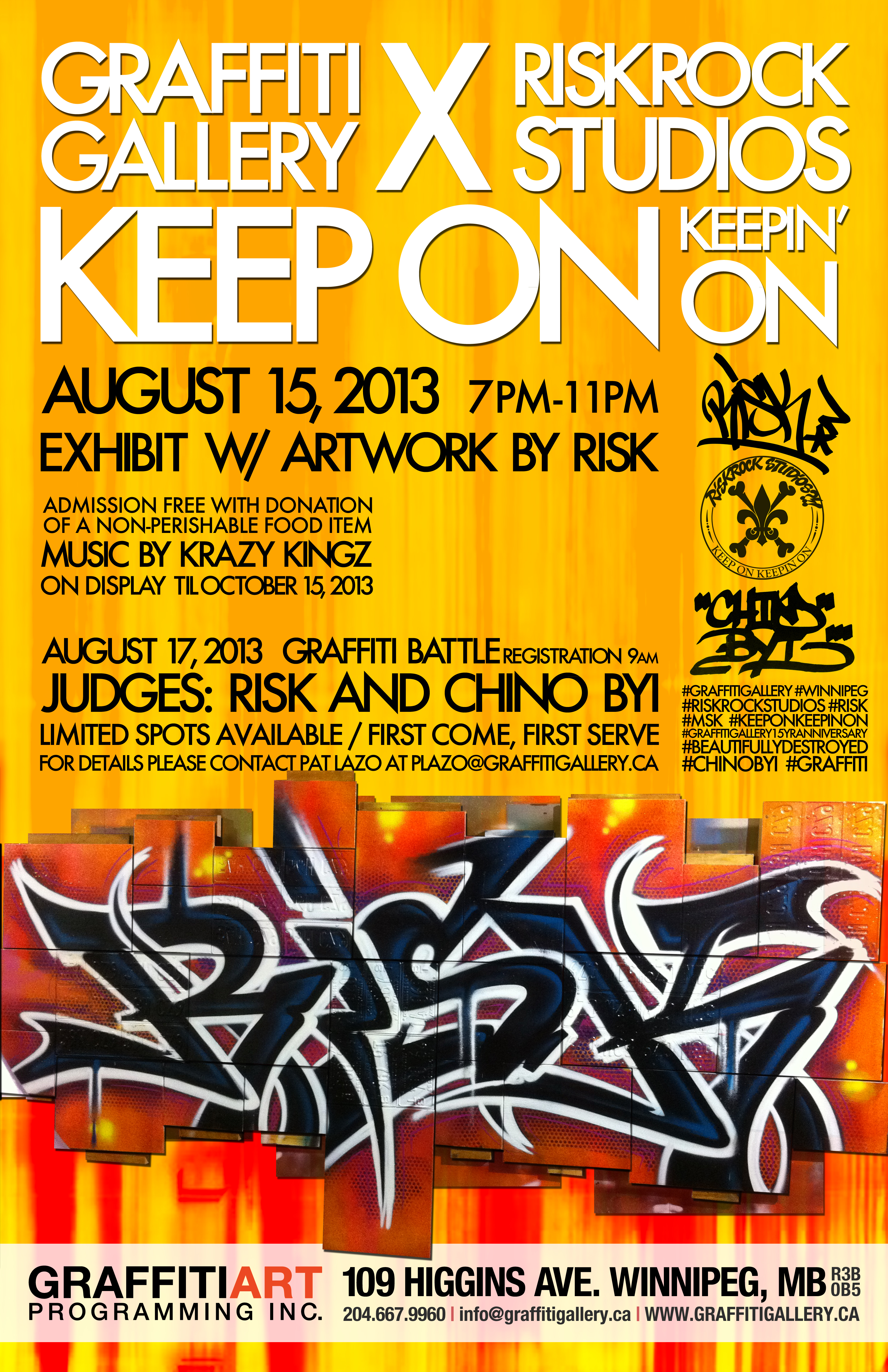 Graffiti Art Programming Inc.—also known as the Graffiti Gallery and GAP—is a not-for-profit community youth art centre that has been providing a space for young contemporary artists to develop and share their work since 1998. In addition to being an organization that provides programming and workshops, GAP also curates exhibitions for more established artists from across the globe.

Opening in the gallery on Aug. 15 is a collection of work by a Los Angeles-based artist, with the moniker RISK MSK, called Keep On Keepin’ On.

RISK’s career started 30 years ago, as a 16-year-old freshly transplanted in L.A., when he was one of the first writers in Southern California to paint freight trains and “heavens” (more commonly known as freeway passes).

After starting the group West Coast Artists (WCA) with writers RIVAL and MINER, RISK found himself living a type of “Hollywood lifestyle” where he partied with rock stars and received commissions for major Hollywood projects. RISK worked on sets for movies such as Bill & Ted’s Excellent Adventure and on music video sets for artists such as the Red Hot Chili Peppers, Ice Cube, Bad Religion, and Michael Jackson. Even with this commercial success, he continued to surpass the boundaries of graffiti while doing tours with WCA such as his “Bum Rush” tour, and another where he painted planes, trains, and automobiles.

His next step was to take graffiti from the streets and into a gallery setting by launching a series of art shows called Third Rail alongside the writers DANTE and SLICK. After recognizing that not everyone could afford his artwork, RISK started putting his work on t-shirts and adapted Third Rail into a line of graffiti-inspired clothing. He found success in clothing design, including winning designer of the year awards.

Fast forward to today, where RISK is making his way to Winnipeg to install his latest work in the Graffiti Gallery, host a community beautification project, and judge this year’s annual graffiti battle. RISK’s current work, referred to as his Beautifully Destroyed series, works to uplift poorer communities by adding pure colour to urban landscapes. RISK paints fire hydrants, mailboxes, and buildings in a visual testament to the power of colour. The idea is to foster pride and encourage other acts of neighbourhood improvement, and to also engage the public in a discussion on the value of street art.

One of the workshops took place on Thursday, Aug. 8, and the evidence is located at 5 Beaconsfield St. (North Point Douglas) in the form of a building painted electric pink and purple. Participants of the workshop included staff from GAP’s Studio 5—formerly the Norquay Satellite Building—who got to participate firsthand in the large community art project and soak in some of RISK’s experience as a street artist with international exhibition credentials. The next installment in the series will be located at 109 Higgins Ave., the home of the Graffiti Gallery.

Every year, as funding allows, GAP hosts a Battle of the Elements, which includes a Canada-wide b-boy and graffiti battle. The b-boy element will be absent this year, but once again the exterior of the Graffiti Gallery has been buffed, making way for a new layer of original public art. Early in the morning on Saturday, Aug. 17, writers ranging in experience from seasoned veterans to newcomers doing their first throw up will line up to claim their piece of wall – it’s on a first-come, first-served basis, and prizes are awarded to the top three participants. This year RISK will judge the competition alongside writer CHINO BYI.

“This is insane! See pieces by RISK in person—not in [magazines] or on the [Internet]—and the chance (do we dare) to take part in a [competition] judged by two legends?!” says commenter Kris Wuud, on the Facebook event page made for the battle.

Keep On Keepin’ On by RISK runs at the Graffiti Gallery from Aug. 15 to Oct. 15. For more information visit www.graffitigallery.ca