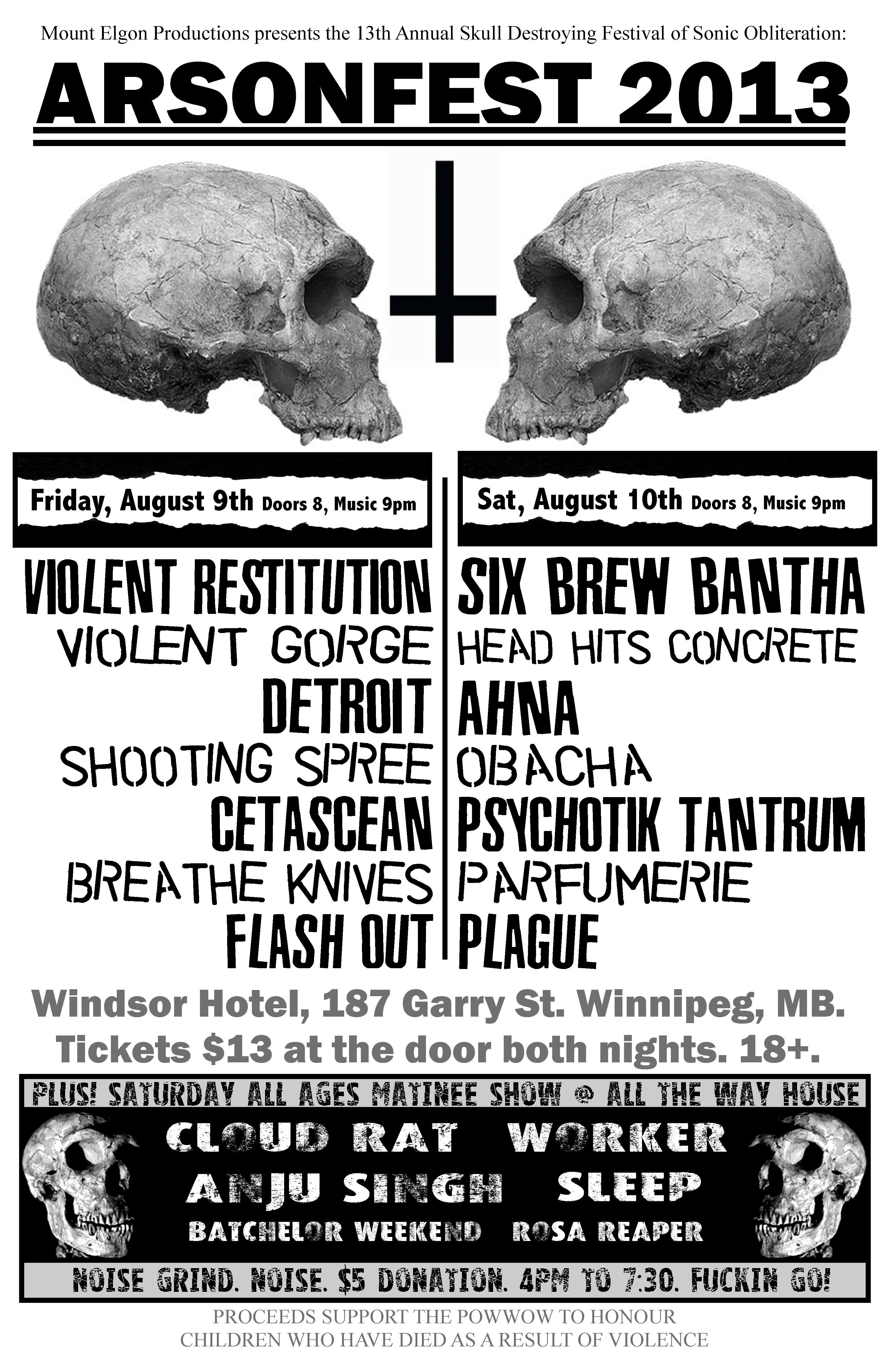 If you are into loud music and you’ve never heard of Arsonfest, man, I don’t know what to tell you.

For over a decade, Mike Alexander (Head Hits Concrete, Putrescence) has been organizing a festival dedicated to showcasing DIY bands within the genres of grindcore, doom, punk, and metal. This year’s fest takes place on Aug. 9 and 10 at the Windsor Hotel and includes an all-ages noise/grind matinee at a house. The lineup boasts 20 bands from all over North America, and proceeds will go towards the annual Powwow to Honour Children.

The Manitoban:  So, it being your 13th year of planning this fest, please talk about how it began and how it became something you’ve dedicated so much hard work to.

Mike Alexander: Arsonfest started because there was nothing like it in Winnipeg and I was envious of cool music festivals happening elsewhere. I was and still am attracted to stripped-down, raw, ugly music being performed in barely adequate venues for people who prefer their sounds angry, fast, violent, and socially aware.

Over the years it’s sort of become this summertime monster that does whatever it pleases. I’m starting to think that I couldn’t stop this thing if I wanted to. Every year, good friends make it a point to be in Winnipeg during the second weekend of August because they know that for fans of grindcore, punk, and metal, this is the place to be.

M: Have there been any changes or developments to the fest over the years?

MA: Arsonfest has always been fairly nomadic over the years, which is a reflection of how challenging it can be to host DIY events in the city. I’ve tried my best to keep it as all-ages as possible, and in 2013 it’s a bigger challenge than ever. But I think the core values of the fest have never changed. I can’t really see this thing ever searching out grants, funding, or sponsorship. This isn’t about any of that.

M: Are there any notable supporters that deserve some recognition?

MA: The people that support this thing are individuals that feel like a gig should be a safe place for everyone. These are people who enjoy the noisier things in life, who feel like it’s a positive thing to help raise money for grassroots organizations trying to do good things.

M: Have the proceeds from Arsonfest always gone to grassroots organizations? Would you mind talking about your decision to donate to the Powwow?

MA: I feel like if the underground music community is going to put its money where its mouth is, then this festival is a great opportunity to do so. I think your average festival attendee is concerned with the state of this city and the direction it’s headed. It gives us a chance to do some good with our cash. Because this festival does pay out to bands that travel, it’s after the expenses that it’s able to hopefully donate.

The Powwow committee is a solid group of people who concern themselves with the healing that is required for those people who have lost children to violence, which is a very real and extremely tragic reality. I have witnessed firsthand the impact that a murdered child can have on a family and an entire community. For the past few years, I have felt like this annual event is totally worth the support of the punk community.

To find out more or view the lineup of bands, check out the Arsonfest event page on Facebook.