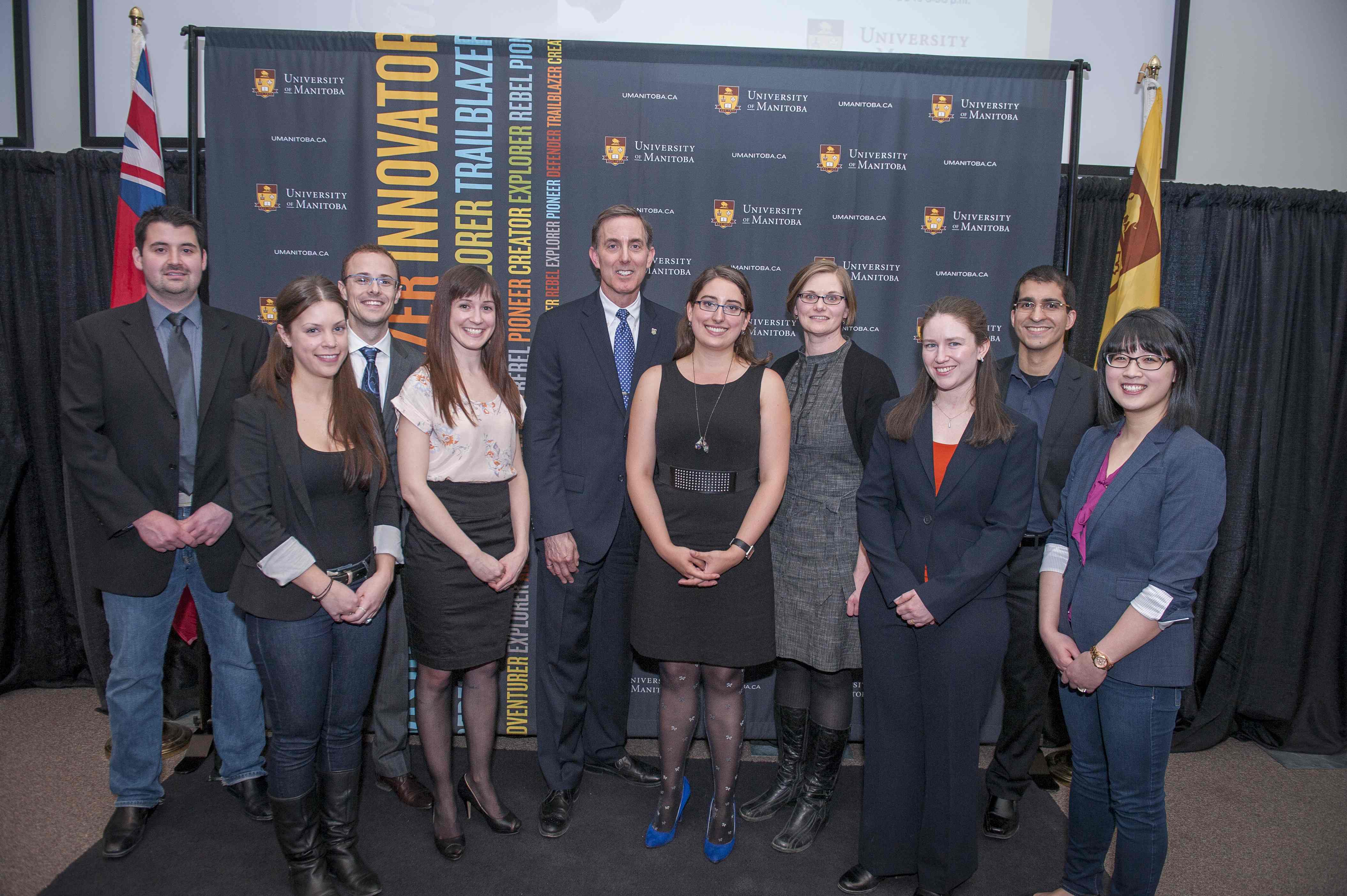 The University of Manitoba showcased some of its talented students throughout the first Three Minute Thesis (3MT) competition. Graduate students shared their three-minute presentations on how they are using their research to be innovative while changing lives.

Jay Doering, the vice-provost of graduate education and dean of graduate studies, brought the competition to the U of M. A committee chose 30 students from a pool of 137 and grouped them into three heats. From those heats came three winners, who each won an iPad and moved on to the final competition.

The judges made a swift but difficult decision between the final nine and narrowed it down to three winners.

The evening of the finals on Mar. 6 began with a message from U of M president and vice chancellor David Barnard; it was hosted by Richard Cloutier, CJOB news director.

“These brilliant young people are explorers and trailblazers who bring ideas to life,” said Barnard. “The discoveries of graduate students cure disease, spark economic innovation, and challenge our assumptions on everything from human rights to the creation of the universe.”

Judges for the final competition included Minister of Advanced Education and Literacy and MLA for Southdale Erin Selby, chair of the U of M Board of Governors and executive chair of Innovate Manitoba Janice Lederman, and Winnipeg Free Press editor Paul Samyn.

Anthony Signore, a biological sciences PhD student, won the second prize and was awarded $2,000. He was the second presenter and explained how his research aims to examine how the bodies of humans and animals react to the cold.

Signore spoke about how the frigid cold disrupts bodily processes. Hemoglobin, found in blood, is created in the lungs and is sent to other parts of the body. Signore said that as the temperature decreases the body holds on to oxygen and doesn’t send it to other tissues. His research looks at the gene sequences of the mammoth and sea cowl, which moved from warm places to the Arctic, in order to study how the process of hemoglobin works within these animals.

The third “People’s Choice” award of $1,000 was chosen by the audience. This award was given to Christopher White, a physiology PhD student, who presented his “Heart in a box” story about an individual with a heart condition.

White told the story of a 26-year-old individual named Jay who eventually became so weak that he was unable to get dressed. He ended up in the hospital and was in need of a heart transplant. A heart became available; however, it could not be delivered in time to be used. According to White, two-thirds of all donor hearts are not used and are thrown out.

White’s research focuses on better ways to preserve hearts so that more lives can be saved as a result. This could be done by mimicking the environment of the body in a box by feeding it blood from artificial arteries, with the goal of tricking the heart into thinking it never left the body.

The other competitors focused on topics such as: disappearing woodland caribou; water management and efficiency in the face of potentially decreasing water sources; HIV and the MKT cells responsible for tiring the immune system; and stress and its effects on our bones.

Leah (Wong) Guenther, a mechanical and manufacturing engineering masters student, won the first prize of $5,000. She was the fourth graduate student to present her research and spoke about her goal of improving the quality of life for disabled individuals.

Guenther stated that nine out of every ten individuals will develop osteoarthritis and that this number will increase. She said that billions of dollars have been spent, and wasted, on hip and knee replacements that eventually fail.

Her research looks at testing new artificial joints before they go on the body. Part of this process focuses on the synthetic lubricant that was created to see how similar it is to the body’s synovial fluid.

Guenther told the Manitoban that winning the competition will bring her research to the forefront of the academic community.

“Placing first in this competition just further motivates all of us to keep doing what we do, because it matters to us and it matters to the community,” said Guenther. “In terms of the cash prize [ . . . ] that’s just a bonus. Having the opportunity to compete with such amazing researchers is a privilege in itself.”

Can you explain your research in three minutes?