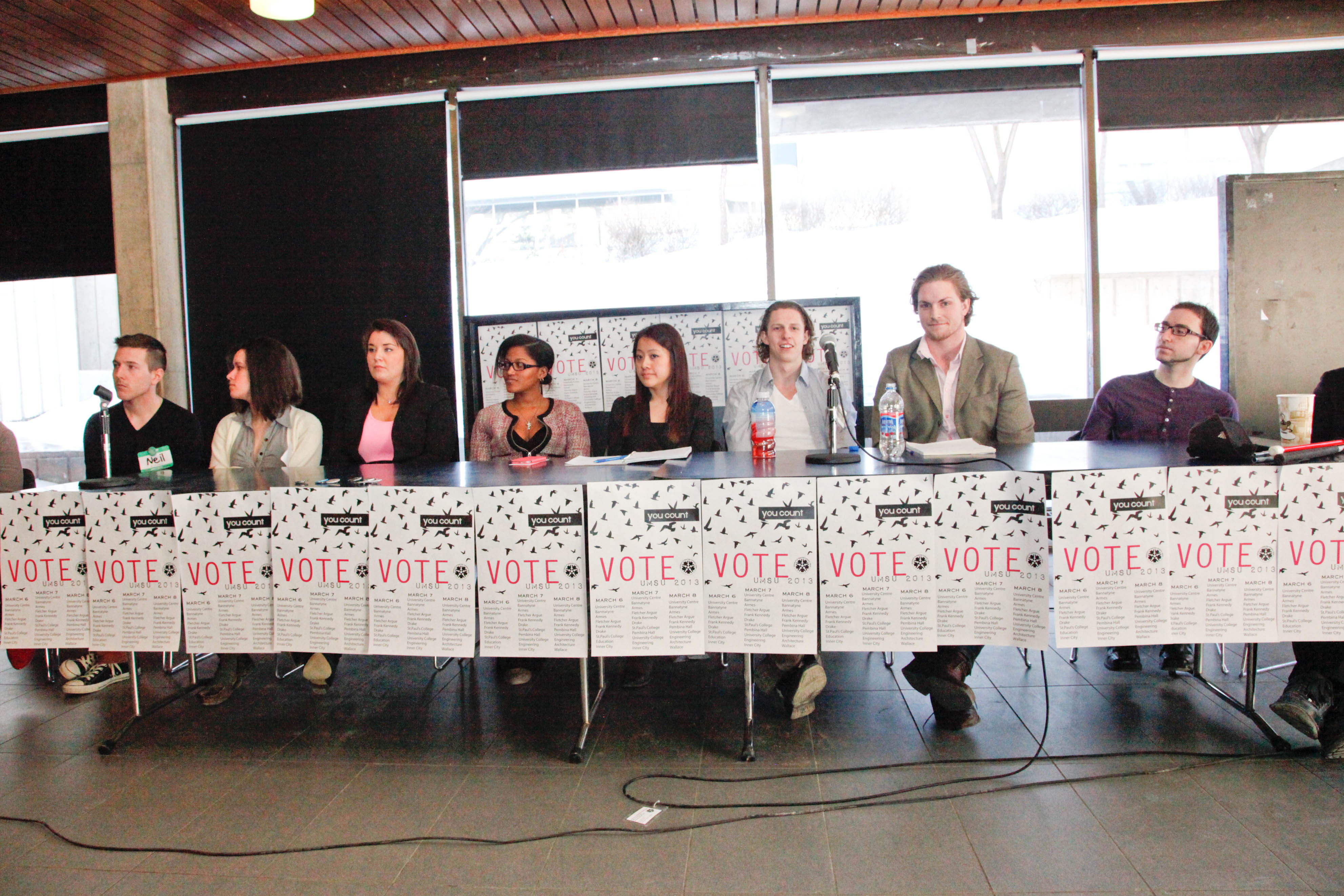 Students asked many questions during the 2013 UMSU Election forum, which took place at the Fireside Lounge in University Centre on Mar. 1.

Members of the Fresh slate, the Your Voice slate, and Students Living With Disabilities Representative candidates Steven Stairs and Rocco Scarcella were present.

Concerning the Hub, Your Voice VP internal candidate Neil Loewen stated that the bar is not doing well this year and that he wants to make it better, specifically by solving parking issues first. Amanda McMullin, the Fresh slate candidate for VP internal said that the Hub should prioritize student groups and stressed that students should be of greatest importance on game days.

Another question asked was concerned with whether UMSU should focus on the campus or on national and international campaigns.

Fresh presidential candidate Al Turnbull stated that UMSU should not outstep the mandate of the union and should focus on building the campus from the ground up for U of M students.

Your Voice presidential candidate Bilan Arte said that national and international campaigns are relevant because they involve issues that affect students at the U of M; therefore, UMSU should get involved with them.

When the issue of the U-Pass was brought up, Fresh stated that they support the U-Pass in addition to opt-outs for residence students and others who have to commute from long distances.

Christian Pierce, VP external candidate from the Fresh slate, mentioned that the current U-Pass proposal advanced by some members of the Your Voice team makes U of M students pay for part of the cost of a U-Pass for the University of Winnipeg. Pierce argued that this was unfair and that the fees paid by U of M students should stay at the U of M to help students here, and not go to other universities.

Arte responded to say that her slate also supports the U-Pass and would look at appropriate opt-outs.

The two candidates for VP student services stated what they would do for students.

Your Voice candidate Ronnie Cruz said she would work to make events like the Long Night Against Procrastination permanent events on campus, while Fresh candidate Thao Lam said that she would work to stop the expansion of paid evening and weekend parking.

Rocco Scarcella and Steven Stairs, the Students Living With Disabilities Reps, each expressed what they would do for students living with disabilities.

Stairs said that he would focus on making the university more accessible with universal design concepts for courses, while Scarcella replied that he wanted to bring students together to see what everyone had to say.

Stairs also mentioned that things most students take for granted, such as being able to read textbooks and using the washroom, are challenges for students living with disabilities.

There were some areas of agreement between the slates, as both Your Voice and Fresh expressed support for gender-neutral washrooms.

In response to a question about the International College of Manitoba (ICM), both slates communicated similar views on ICM, with concerns centering on many ICM students feeling that they were misled to believe they were U of M students and members of UMSU, when in reality they are not.

Voting will take place on March 6, 7, and 8 across all campuses.