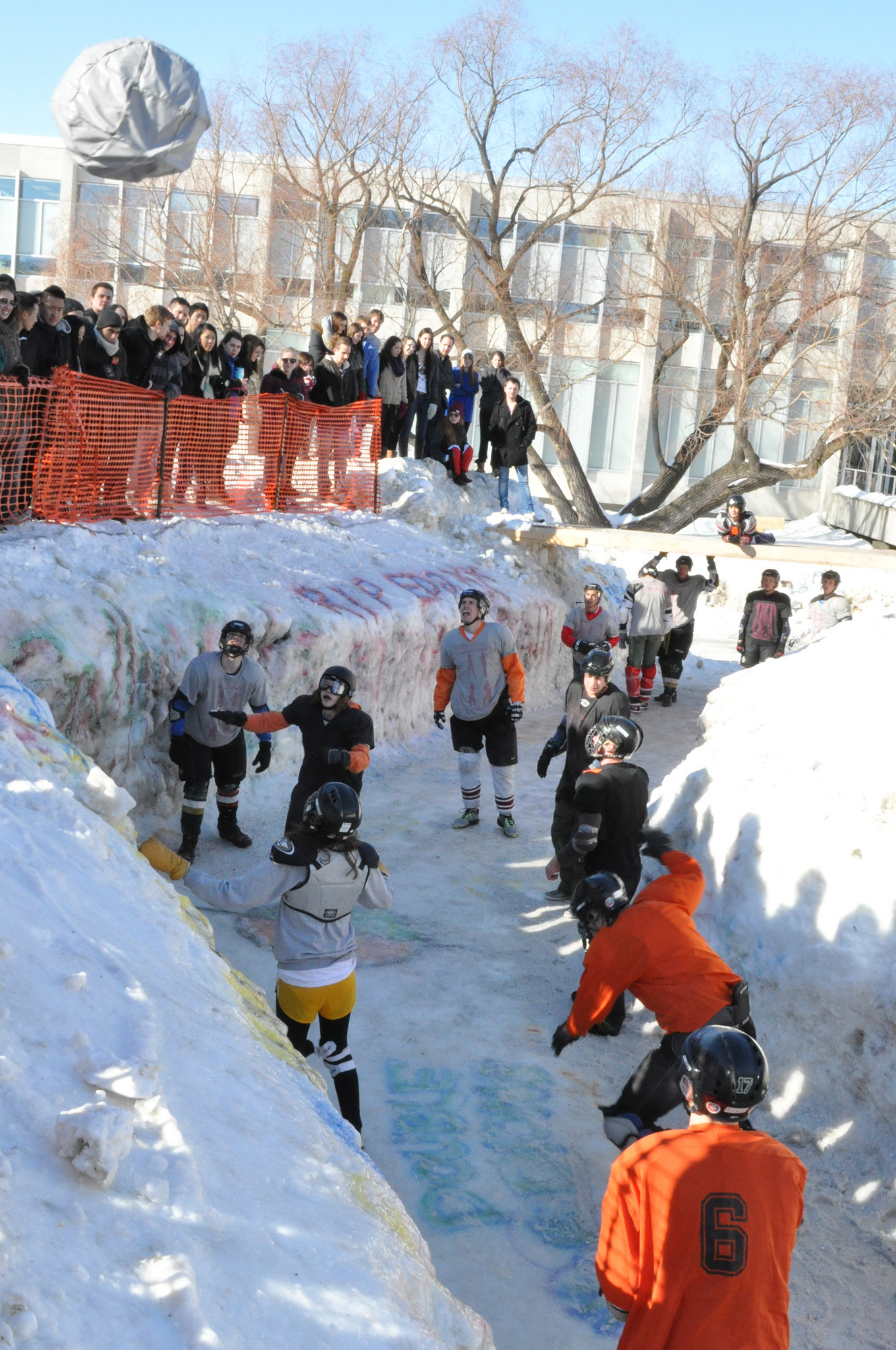 For the 35th year in a row, students from the faculty of architecture congregated around an icy ditch carved right through a huge mountain of snow located just south of the Russell Building.

This annual tradition is entirely unique to the University of Manitoba, and is called Ditchball.

Verne Reimer, a member of the graduating class of ’79, was one of the 16 architecture students behind the creation of Ditchball. He explained that the genesis of the sport occurred during a trip up to Hecla Island in 1976, when a combination of boredom, an icy ditch, and too much free time led to an impromptu game of ditch shinny/soccer with a group of architecture students kicking a big clump of dirt around to pass some time.

Later, Reimer and a group of likeminded people decided to elaborate on that spur-of-the-moment activity as a theme for an annual winter festival that would serve as a faculty social event.

“As part of the winter festival, we needed a signature event,” Reimer explained. “So we sort of went back in time a bit and said ‘well, how about that ditch? Why don’t we make that something?’”

And so, a small group of guys got together to brainstorm a small set of rules that would come to define Ditchball.

The goal of the game is for a team of five to get the oversized ball, formerly called the rhombicuboctahedron on account of its 24 sides, through to the other end of the ditch, where one member of their team waits on a bridge over the ditch to grab the rhombicuboctahedron. That’s good for one point. The team with the most points after two 10-minute halves moves on in the tournament.

There are only a few rules: all players must wear a helmet (most are clad in full hockey gear), participants will not strike one another, and any action deemed too violent by the referees may result in ejection from the game or the tournament itself.

As one of the organizers of the 2013 tournament, Aaron Pollock explained that the tradition has become so ingrained in the fabric of the faculty and the school, that the folks from the physical plant who clear the snow from campus know just where to dump it, and help to clear out the ditch.

“I think it’s really important (to preserve the tradition),” Pollock stated, adding, “This faculty itself is very unique, and that culture is a big part of it.”

Reimer, who was on campus to officially open the tournament, is proud to see that the tradition and culture he had a hand in creating is still going strong.

“It’s fantastic. For anything to go this long is pretty neat.”

“I hope it continues as long as the faculty continues and the University continues,” said Reimer, “I think it’s got proven lasting power so far, and so long as people find it interesting they’ll continue doing it.”