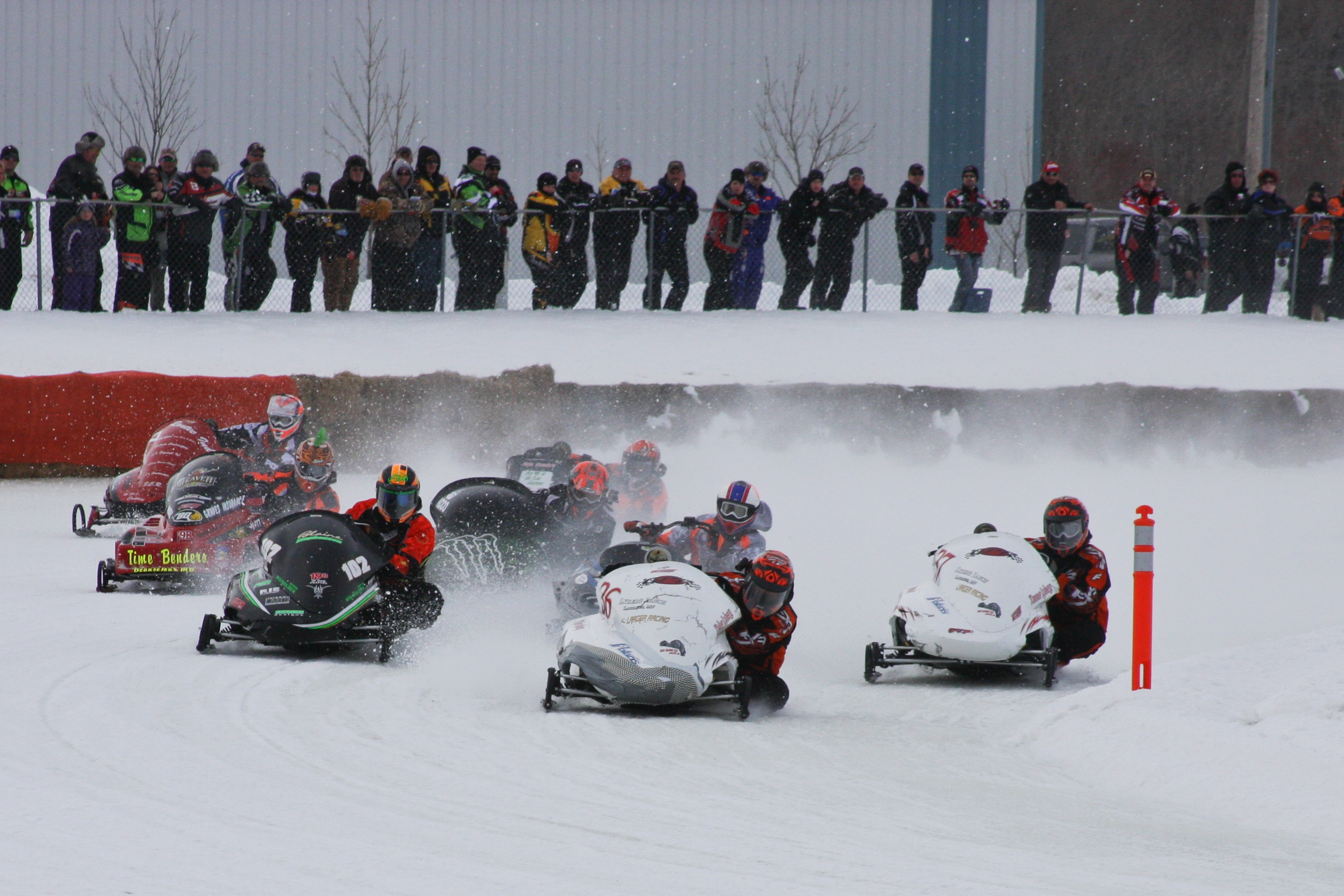 Snow machines scream around an ice oval, filling the air with the smell of burning engine oil. Such was the atmosphere on Mar. 2nd and 3rd in the town of Beausejour at the 51stannual Canadian Power Toboggan Championships (CPTC).

“During the March 1997 races, we could hear the sounds of sleds racing from inside our house. Out of curiosity, we bundled up our children aged two and five years and went to the race track to see what all the ‘noise’ was about,” said CPTC photographer Darryl Gershman in an interview with the Manitoban.

After moving to Beausejour in 1996, Gershman and his family quickly became involved with the CPTC.

“We saw that the CPTC races were a world-class event in our own backyard and decided to get involved as volunteers,” remarked Gershman. Though he is the resident photographer now, Gershman started working behind the scenes in the canteen and was eventually put in charge of recording racers’ speeds using radar – a responsibility his 17-year-old daughter has upheld the last 10 years.

“We were never motor sports fans but there was something about watching these snowmobiles racing around the ice track at 160 kph that fascinated us,” noted Gershman.

Indeed, top speeds from Mar. 3 were closer to 170 kilometres per hour, with the winner of the day’s Pro Champ 440 Final, Jordan Wahl, charting among the fastest. Amy Boyd took home top honours in the Women’s Formula 500 Final. Though Wahl and Boyd make it look effortless, it takes tremendous skill to ride a snowmobile on ice, surrounded by other snowmobiles, all racing at high velocities within arm’s reach of each other. The quality of the ice and the temperature outdoors can influence the tempo and safety of the races. The ice oval is between 12 and 18 inches thick and, depending on weather conditions, by the end of the races that can change dramatically. One year, reflected Gershman, temperatures rose to 14 degrees Celsius “and it was a ‘race’ to finish the races before the track melted.”

According to Gershman, Beausejour’s CPTC Raceplex is recognized as one of the safest ice oval tracks in North America.

“Flax bales surround the entire half mile oval, and these bales have saved many racers from serious injuries over the years. An ambulance is always at the track during the races if needed. But injuries are a risk that racers accept when they participate in the sport.” Every year the rural Manitoba town attracts riders and fans from all over North America to take in the competitive fringe sport. Attendance for this year’s weekend of races was upwards of 4,000.

“We had a great crowd, we had a great turnout for racers. We covered pretty much all of North America,” noted Andy Baker. Baker is the director of the CPTC, a former racer, a member of the ice oval Snowmobile Hall of Fame, and his father was one of the original organizers in the early 60s. Unlike other ice oval tracks across North America, Beausejour’s track is run entirely by volunteers. Baker and other board members work tirelessly throughout the year to make the CPTC a success.

According to Baker, though the economical woes still facing large parts of the U.S. have led to less American entries, the sport as a whole is expanding its Manitoban base of racers.

“We have a really good turnout of local racers now and that’s really encouraging,” remarked Baker in an interview with Steinbach Online, adding, “It also helps our crowd because local people like to watch local racers.”

“The sport itself is growing and we are getting more young people involved so that’s always encouraging.” Enemy at the gates: Taking a look at invasive aquatic species in Manitoba